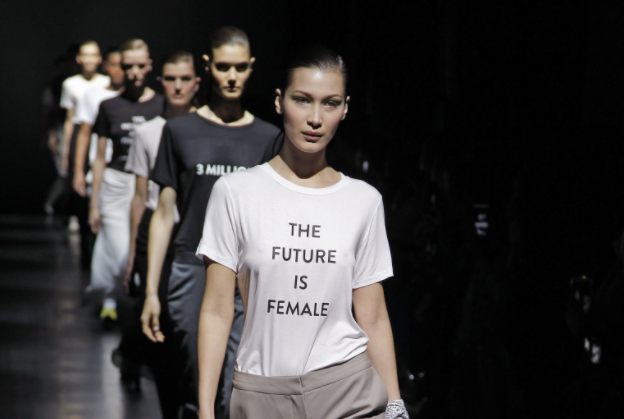 “Power” was the most-used fashion word of 2017, according to new data from Lyst.

The global fashion search platform has analyzed more than 30,000 online editorial articles published throughout the year across 100 online fashion and lifestyle publications. The articles were broken down into their individual component words, with Lyst using sentiment analysis modelling to build a scale of the most important words of the year, excluding brand names.

“Power” came out on top, followed by the term “woke,” suggesting that the feminist and politically-charged fashions seen on the catwalks over the course of 2017, presented by designers including Dior and Prabal Gurung, made a strong impression. The industry didn’t shy away from politicization away from the catwalk, either; the Council of Fashion Designers of America (CFDA) teamed up with the American Civil Liberties Union (ACLU) on an initiative called “Fashion for ACLU” at New York Fashion Week this fall, having already launched an initiative publicly supporting the women’s health organization Planned Parenthood earlier in the year.

“Statement” was the third most-used word, followed by the more precise “floral,” in a nod to one of the biggest trends of the year. “Millennial,” “Extra,” “masculine” and “cult” also made the list, with two of the most surprising terms, “ugly” and “vegan,” rounding out the top 10. While “ugly shoes” have become a persistent trend over the past 12 months, championed by designers including Christopher Kane, “vegan” is no doubt indicative of the rising popularity of sustainable fashion. Environmentally clothing solutions rose to the forefront of the fashion conversation at several points during 2017, buoyed by collections from Mango, H&M and Stella McCartney, among others.

Here are the top 10 most-used fashion words of the year, according to Lyst:

Merriam-Webster’s word of the year for 2017: ‘Feminism’