12 things to do in Honolulu | Inquirer Lifestyle 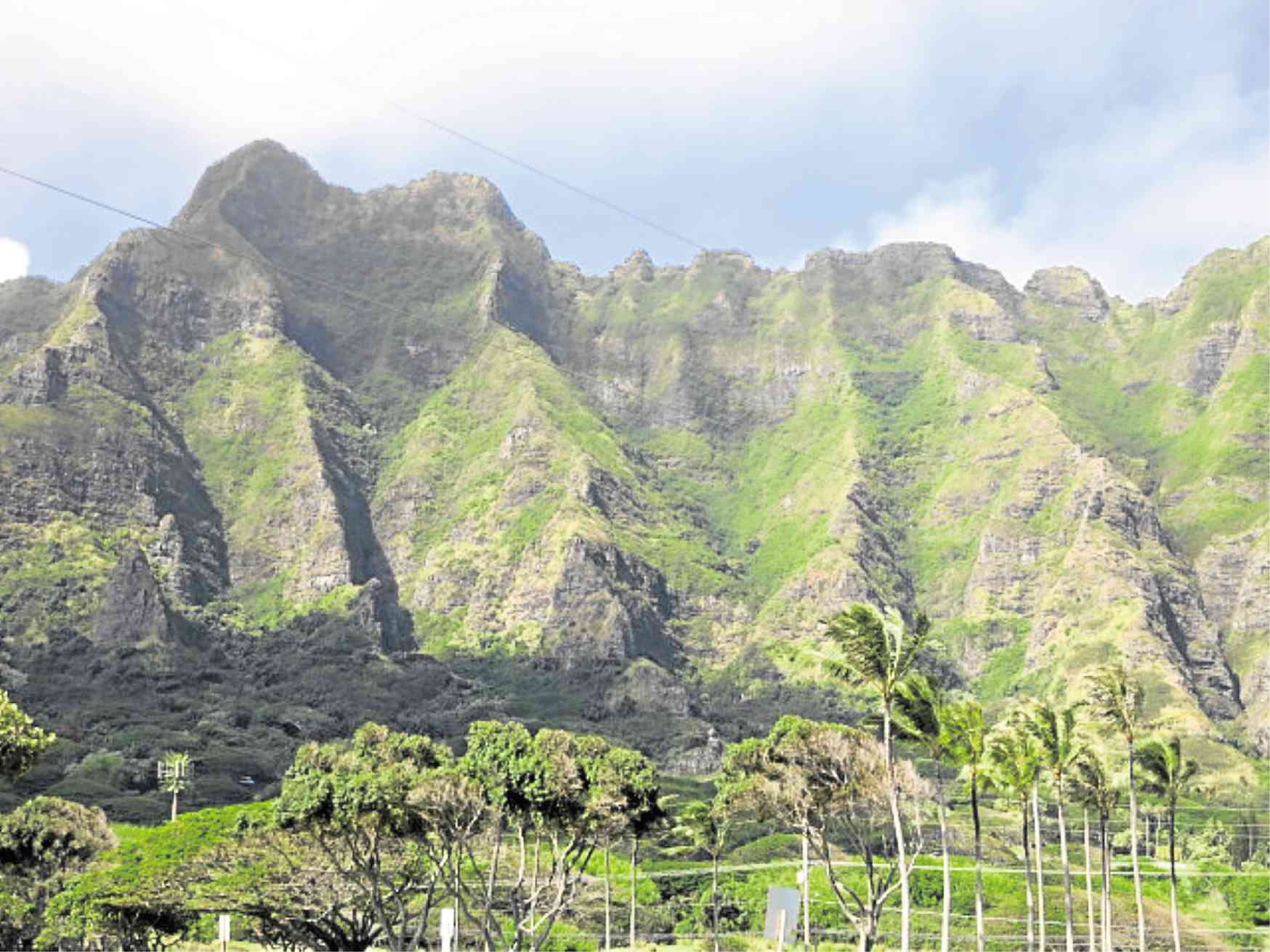 Mountain ranges along the North Shore

12 things to do in Honolulu

Nine days are hardly enough to explore the beauty and serenity of Hawaii. This 50th state of America, after all, consists of eight different islands, each with its own natural attractions.

Perhaps it will take an entire lifetime of persistent exploration to learn the secrets and mysteries of this slice of tropical paradise.

Nevertheless, we tried to make the most of our short stay in Honolulu, Hawaii’s capital and its biggest city. Each day a new adventure was waiting to be discovered, glimpse by glimpse, the allure of its landscape, the loveliness of its people and the laid-back lifestyle.

Here are 12 of the best things you can do for a memorable and fruitful stay in Honolulu.

1. Stroll along Waikiki Beach. This stretch of white sand is probably Hawaii’s most famous beach. The swarm of tourists hardly detracts from the beauty of the shimmering blue waters and the joy of walking barefoot on the powdery sand.

2. Go on a boat tour, which offers different adventures, like whale watching or dolphin sightings. However, seeing these wild sea creatures is not always guaranteed—they may or may not appear. In our boat tour, we didn’t see any whales or dolphins, but there were plenty of turtles swimming in their natural habitat. We also came within close distance of Diamond Head.

3. And speaking of Diamond Head, how about taking a hike to its peak? My daughters Pia and Lisa did it on New Year’s Day. The climb to the summit of this state monument takes about 45 minutes each way, with a few perilous steps here and there, including some steep climbs and a passage through a 225-foot-long lighted tunnel.

But it’s doable, Pia and Lisa said—the views of Honolulu and the Pacific Ocean once you reach the top are spectacular. Be sure to wear a good pair of sneakers suitable for hiking.

4. Drive to the North Shore, which is about an hour’s drive from the crowded sands of Waikiki and downtown Honolulu. With towering waves that reach up to 30 feet, the beaches of North Shore are a favorite of surfers.

Several international surfing competitions are held there during the peak winter months. The North Shore is also where you’ll find the famous Waimea waterfalls and botanical gardens.

The majestic mountain ranges along the way make the drive worthwhile. Other points of interest are the art galleries and charming cafés scattered throughout the rustic countryside.

And off-season, when few tourists and surfers are around, the beaches almost seem deserted, giving you more privacy and space to swim in the clear, blue waters.

5. Eat in a shrimp truck. While you’re in the North Shore, stop by one of the shrimp trucks parked along the highway. These trucks serve farm-raised prawns and shrimps in their various mutations: with lemon butter, spicy sauce, ginger and other delectable choices.

There’s usually a crowd, so you’ll have to get in line. But the fresh prawns and shrimps are surely worth the long wait. While waiting, you can enjoy the breeze as you sit in one of the huts where there are chairs and tables for dining.

6. Visit the Dole Pineapple Plantation, which is also along the North Shore, in the historic Wahiawa town. Here you can ride in the pineapple express train for a tour of the plantation, or walk on a self-guided tour of the gardens, where you’ll see native species of plants and fruits.

The more adventurous can try their luck at going through Dole’s enormous maze, which, with over three acres and 14,000 colorful Hawaiian plants spread over two and a half miles of paths, was declared in 2008 by the Guinness Book of World Records as the world’s largest maze.

A restaurant serves sandwiches, pastries and drinks (most with pineapple in them) and a gift shop offers island souvenirs. (Visit www.dole-plantation.com.)

7. Eat Hawaiian food. A combination of native Polynesian cuisine and the influence of foreign settlers make up the uniqueness of Hawaiian fare. With rich resources from the sea and the availability of indigenous plants, Hawaiians have created dishes such as poke poke (a bowl of raw tuna salad), lau lau (pork and fish steamed in taro leaves), and haupia (coconut cream custard).

As good as Hawaiian food may be, don’t miss out on other ethnic dishes. A must-try is the malasadas or Portuguese-style doughnuts. They’re crisp at first bite, then chewy and fluffy toward the center.

Also not to miss: Japanese restaurants such as Marukame, which specializes in piping-hot bowls of udon noodles, and Genki, where the sushi is brought to your table by a miniature shinkansen (bullet train) speeding on a conveyor belt.

8. Have some Hawaiian shaved ice. For some reason, Hawaii is famous for this cold treat drizzled with an assortment of flavors—strawberry, raspberry, banana, orange and pineapple, among others. Or combine all of them and ask for a rainbow of flavors.

9. Attend a luau. Much more than a feast of food, a luau can also be a showcase of Hawaiian arts and culture. We went to the one offered by Paradise Cove, located in a secluded 12-acre beachfront estate.

After being greeted with leis and drinks of mai tai, we were taught how to string garlands of flowers, while others tried their skill at ancient Hawaiian games such as spear throwing and ulu maika (an ancient form of bowling).

There were also canoe rides, Polynesian dance performances (including a heart-stopping Samoan fire-and-knife dance) and the highlight of the evening: a ceremonial unearthing of a roasted pig from an underground oven, which was later on served as part of a sumptuous buffet.

10. Go to the shopping outlets. For the inveterate shopper, there’s the Waikele Premium Outlet, about 50 minutes from Waikiki. You’ll find designer handbags (Kate Spade, Coach), clothes (Banana Republic, Tory Burch) and shoes (Nine West, Skechers). The outlets may not be as huge as those in California or New York, but they still offer some good buys.

Because there are also cooked food such as hamburgers, pizza and shrimps by the bucket, you can even have a picnic breakfast or lunch there (it’s open 7:30-11 a.m. on Saturdays). Just be sure to bring your own chairs or a picnic mat to spread on the grass, since dining tables and chairs are not provided.

12. Go to the museums. Despite our tight schedule, we somehow managed a visit to The Honolulu Museum of Art, which has an impressive collection of art pieces from North America, the Pacific countries, Africa and Latin America.

There’s a special section on Philippine art on the second floor, which includes an oil painting of Vicente Manansala and an installation by Alfonso Osorio.

Our friend Tess Bernales also recommends a visit to the Bernice Pauahi Bishop Museum, which has the largest collection of Polynesian cultural artifacts and natural history specimens.

Surely there are many more sights to see and things to do in the island of Oahu. Having missed some, we vowed to return there one day soon. Which is probably what others who’ve been there are also telling themselves. So captivating are the islands that one visit is hardly enough. After all, aloha means goodbye—and welcome.