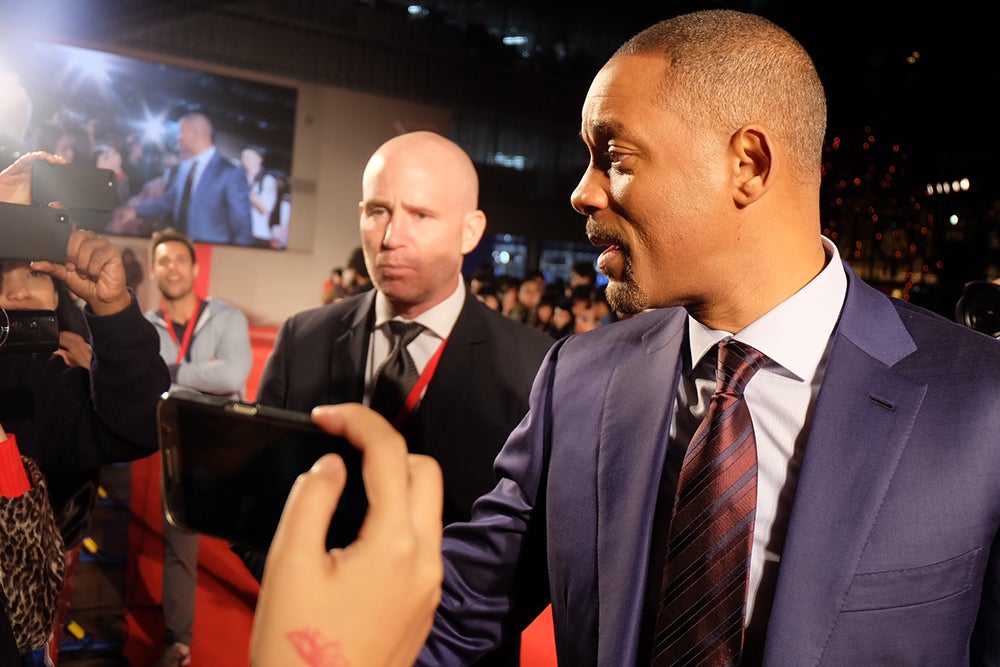 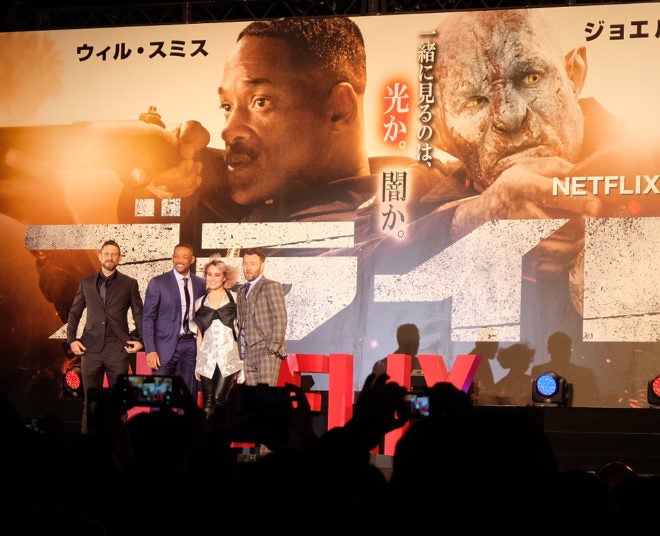 “In terms of the chemistry between Joel and I, it’s very very close to those classic Hollywood romances. When he would put that orc makeup on, it would do something inside of me,” Will Smith said about his co-star Joel Edgerton.

In Bright, a film set in an alternative version of Los Angeles where orcs, fairies and elves coexist with humans, the two play LAPD cops and partners. Will Smith is Daryl Ward, a veteran police officer forced to work with rookie Nick Jakoby,  the first orc to ever serve as a cop, played by Joel.

On night patrol one eventful evening, the two end up having to protect a young elf and a rare magic wand from evil forces, taking audiences on an action-packed adventure.

“It’s a combination of different genres,” said director David Ayer who also worked with Will on Suicide Squad. “The fun for me was telling a different kind of story in Los Angeles and changing the city to reflect this fantasy version of the city. It’s also great to make a movie with a message in it so it’s not so forgettable and it’s something people will talk about.”

The film may be teeming with fantasy but it also mirrors today’s realities.

“In our film, the elves are the top of society. They’re the rich people that have everything. And the orcs are the bottom of society, they’re the people everybody looks down on. And the humans are in the middle. For me, as an African-American police officer in this world, to be racist against orcs, it was a very different social paradigm that in playing that, I learned a lot, looking at the racial and class divide, looking at it from that angle in a science fiction movie,” Will said.

“When I read the script and I got to page three and Will’s character murders a fairy, I was very hooked and then I became very much in love with the character of an orc who is bullied by everybody,” said Joel. “I love the responsibility of playing the person who represents everybody who is judged and bullied and mistreated when all they want to be is judged by the work that they do.”

Producer Bryan Unkeless spoke about the role of Netflix in bringing the film to fruition. “The movie would not exist the way it does without Netflix, they provided us with resources and creative freedom,” he said.

“Netflix is very nourishing to filmmakers and let me have my voice,” said David.

“It was a completely different way of working. I really loved playing Leilah, I fell in love with her,” said Noomi Rapace, who plays the elf Leilah, who is the film’s villain.

Will, Joel, Noomi, David, Bryan and producer Eric Newman were in Tokyo for the red carpet premiere of Bright.

Here are our favorite moments:

When the orcs appeared 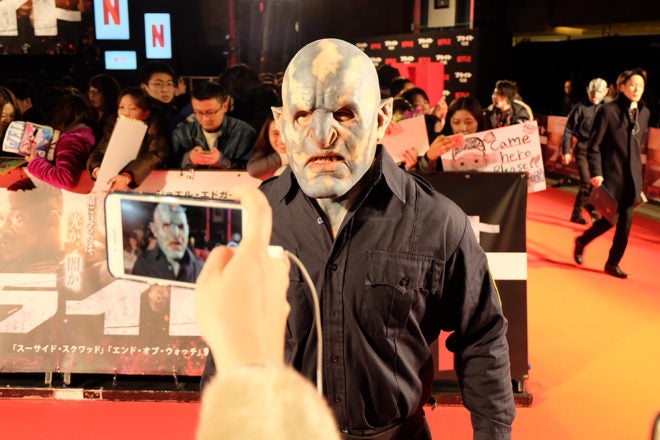 They weren’t Jakoby (who we adore) but they were cool too.

“I always love villains so it was a big honor for me,” Noomi said. 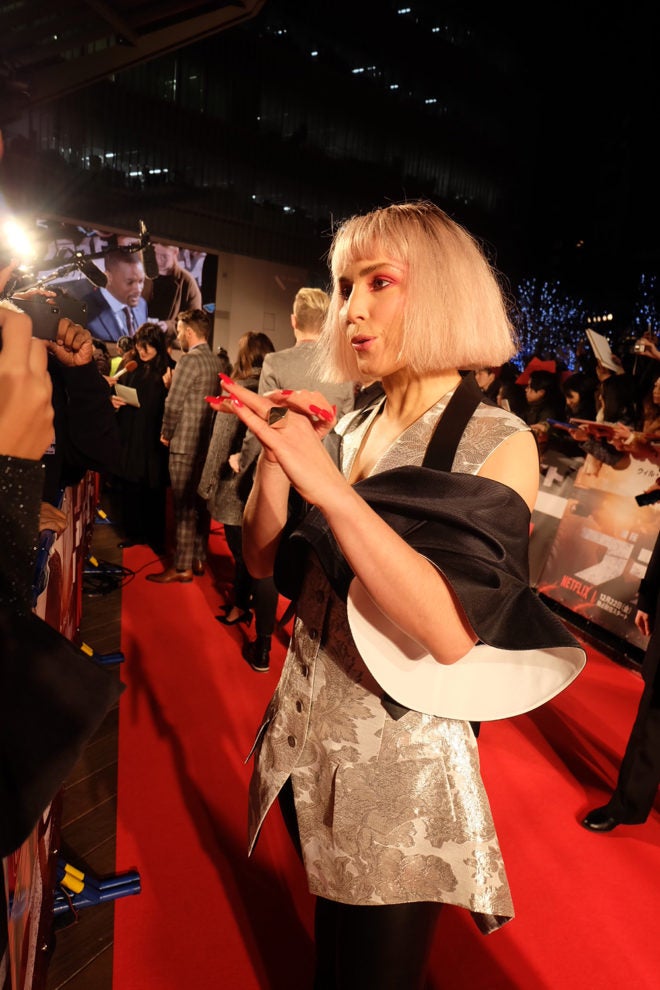 When Joel Edgerton talked about his “friendship” with Will Smith

Ultimately, Bright is a film about friendship and so we wanted to know if a bromance developed between co-stars Will Smith and Joel Edgerton.

“Will thinks that he’s friends with me… and I just tolerate him, you know what I mean?” Joel joked. 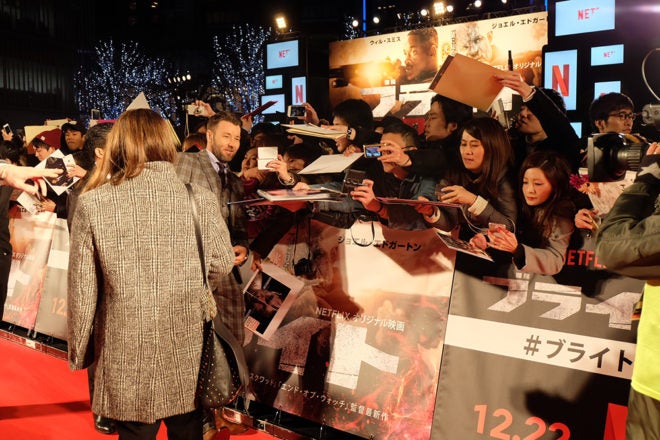 “Kamusta ka?” Bright and Suicide Squad director David Ayer surprised us with his Tagalog skills. When asked how he learned the phrase, he said he used to be in the navy and spent a month in Subic. 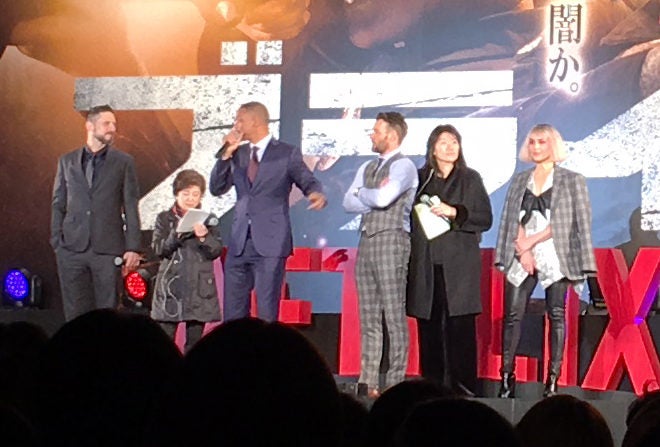 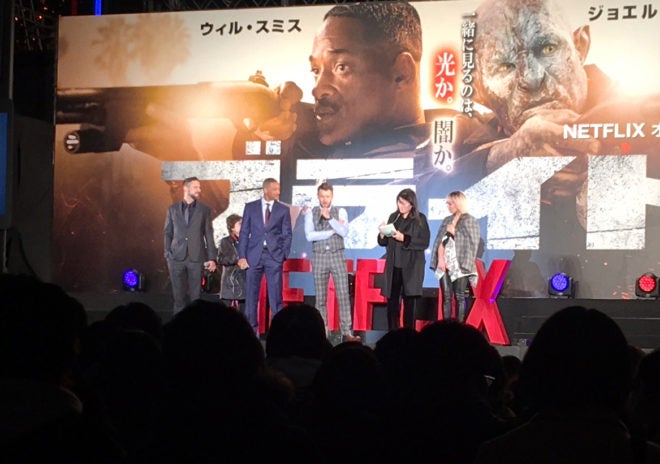 When Will Smith talked about wanting to return to the Philippines

Did you know that Will Smith has been to the Philippines? We didn’t. Apparently, he visited on holiday. “I should come down and do a premiere or something like that,” he said. We couldn’t agree more. 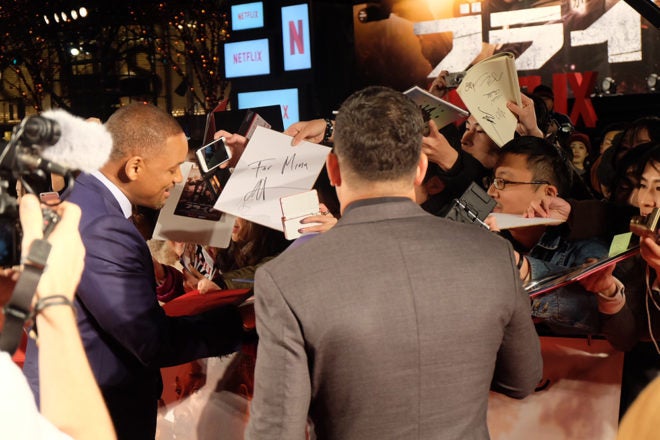 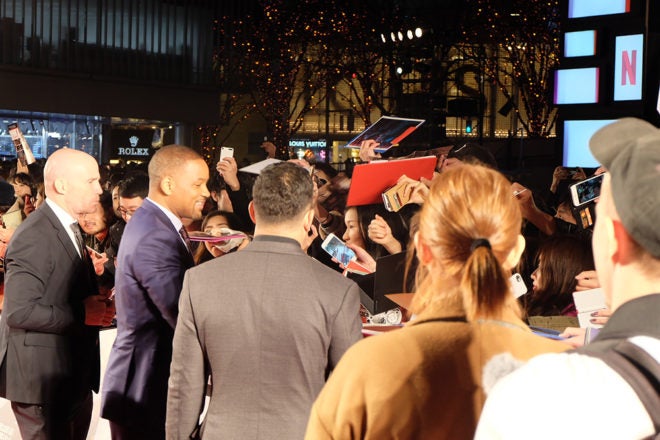 When this super fan finally met Will Smith

Fans lined up as early as seven or eight hours before the premiere and one of them was this girl who was holding up a sign and wearing monkey ears. 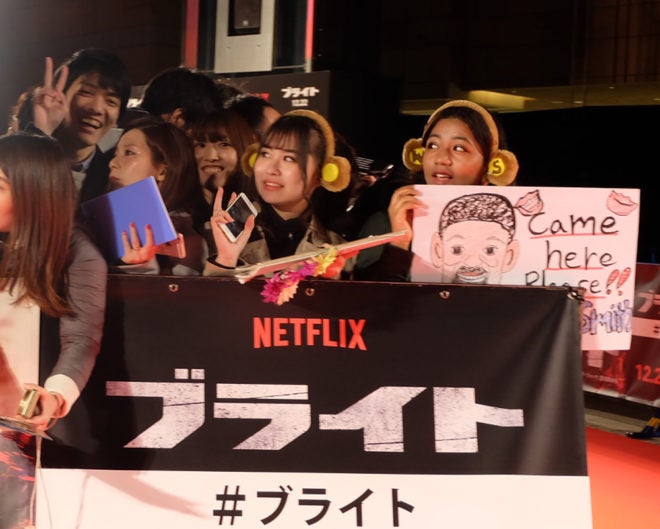 She’d been a fan of Will Smith for ten years, she said, since she was just eight years old. 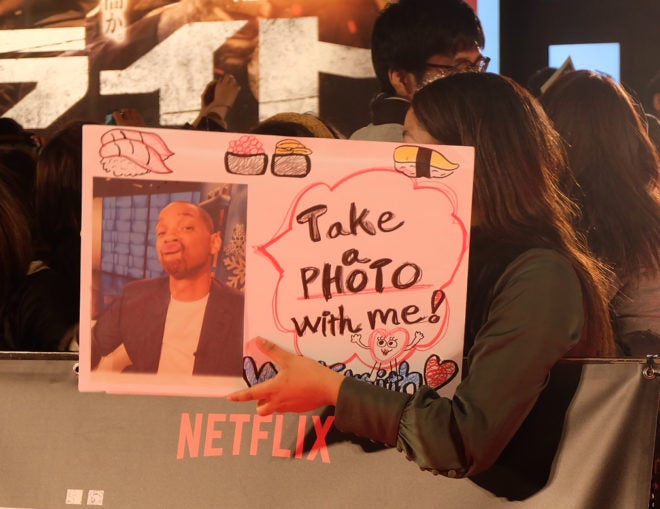 We were thrilled when we saw that she finally got the chance to meet him. 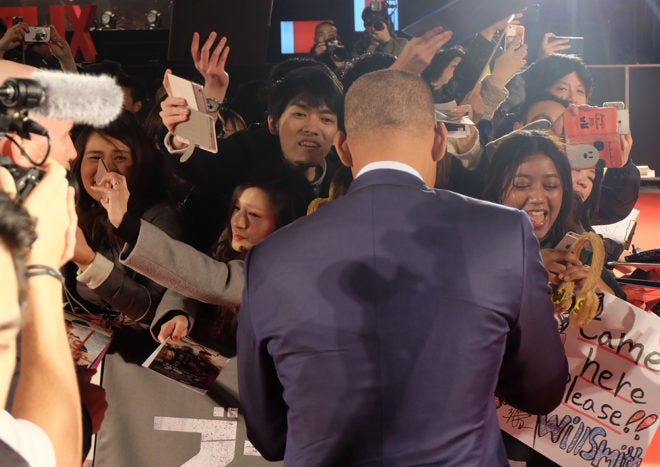 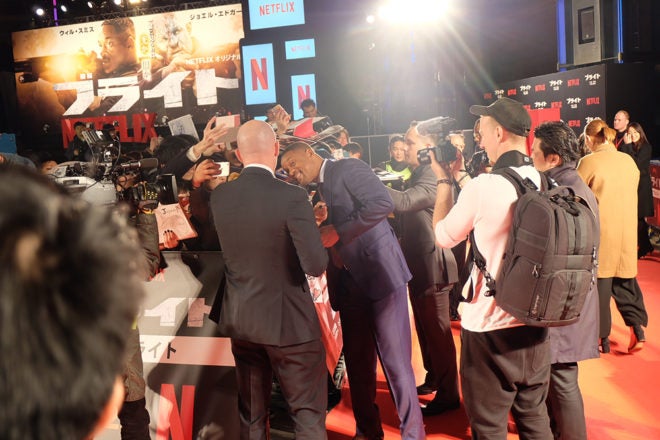 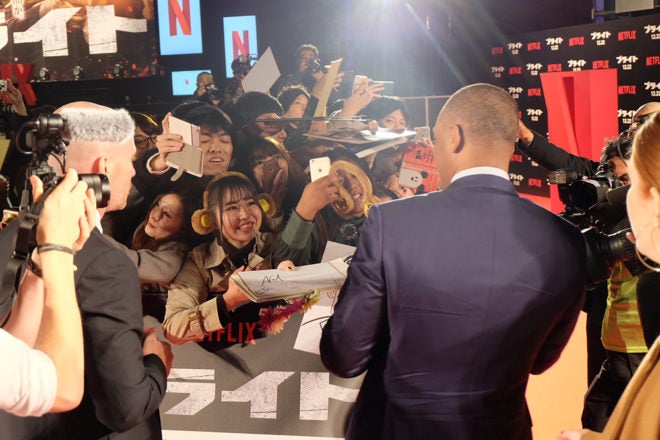 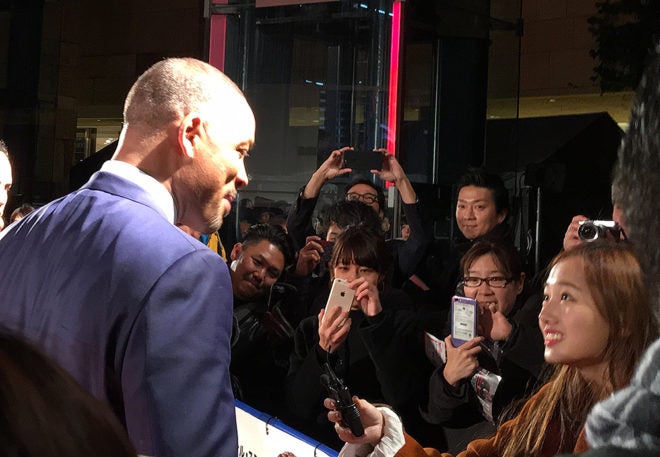 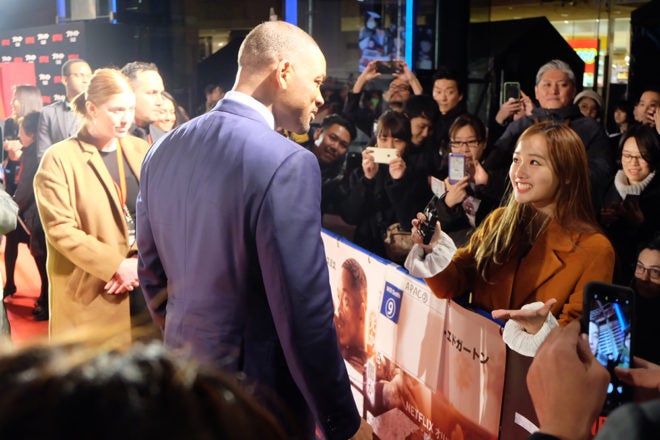 Every time Will Smith shouted “Whoo!”

Will Smith was obviously excited at the premiere—and who can blame him? We loved his energy.

When fans waved silently at Will Smith

Japanese fans are extremely, extremely polite. They do not let out deafening screams, they don’t holler. But, don’t be mistaken, they are dedicated. It was adorable to watch them waving silently at Will Smith while he was onstage to show how excited they were to have him there. 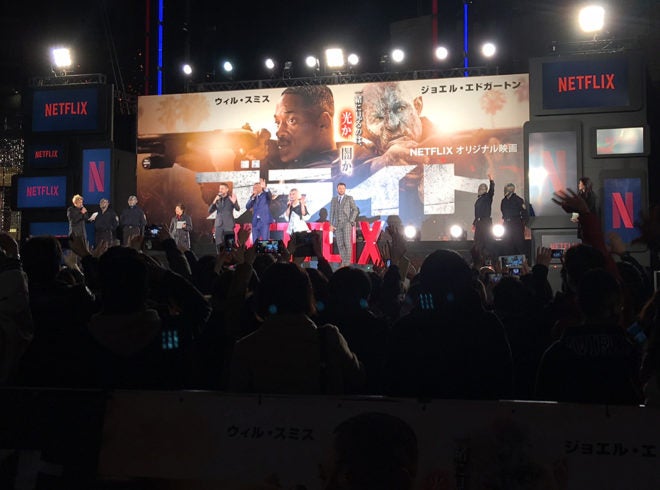 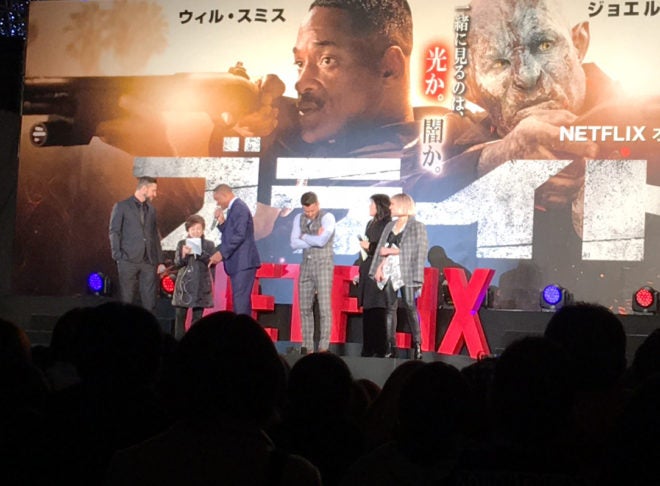 “Are you saying what he said because it sounds like you’re making up some things?” he teased one of the translators while everyone laughed.

When the crowd yelled Bright-o! and confetti rained