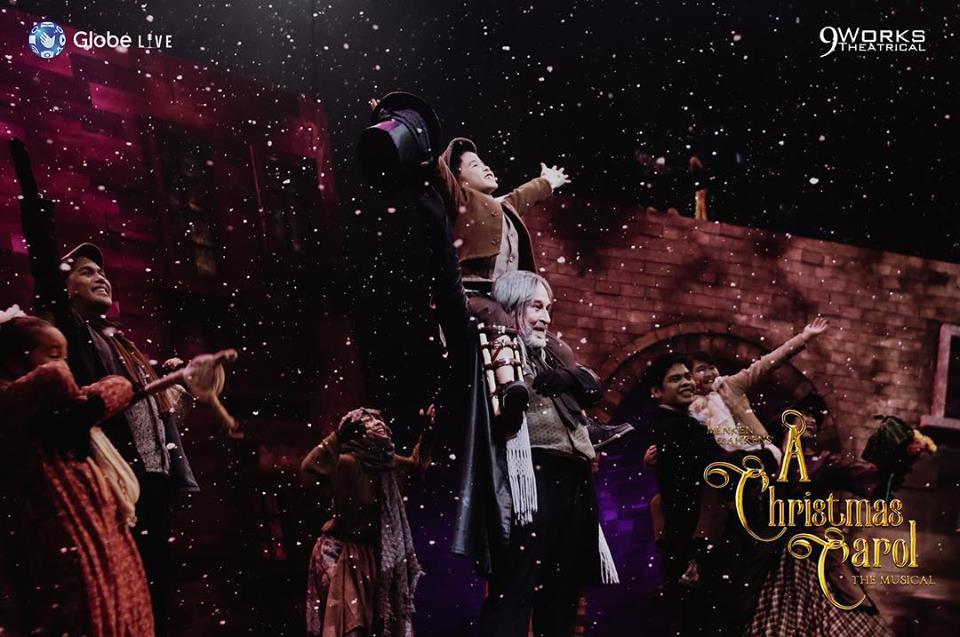 A definitive ‘A Christmas Carol’

Among all theatrical productions of Charles Dickens’ “A Christmas Carol” by various groups that we’ve seen through the years, 9 Works Theatrical and Globe Live’s restaging—running at the Globe Iconic Ampitheater in Bonifacio Global City until Dec. 27—is, in our book, the definitive version.

It fulfills the hype that this iteration is a radical departure from last year’s production, and brings Dickens’ message of hope and holiday cheer into searing light. Director Robbie Guevara cuts out the superfluous from the spectacular, focusing instead on deepening characterization and plot development.

Far from being a Yuletide homily, the musical penned by Mike Ockrent and Lynn Ahrens becomes a spiritual journey the audience can identify with—and bring home with them.

What usually saddles most productions of “A Christmas Carol” is the urge to make it family-friendly. Ebenezer Scrooge is portrayed as a curmudgeon whose stinginess actually becomes an object of bumbling fun.

In 9 Works’ first version in 2016, also directed by Guevara, the star of the show was not even Scrooge or any of his human colleagues, but the city of London itself, teeming with the bustle of Christmas cheer as expressed in one musical number after another. The story got buried in the hectic merrymaking.

In this new version, London serves as a backdrop to the unveiling of Scrooge’s dramatic transformation. There is none of the glamour and glitz of the previous set design, now replaced by Ed Lacson Jr.’s scenery of towering black boxes topped by an ominous giant clock.

This appears to embody Scrooge’s spirit, imprisoned in a miserable, loveless life that is running out of time.

Miguel Faustmann, who has probably grown old with this character, humanizes Scrooge for once—transforming him from the usual caricature into a living, breathing character. There is nothing redeeming about this Scrooge at first glance, no inner clown peeking from under his crusty exterior.

But, then, in an astute move, Guevara makes this Scrooge a participant, and not just an observer, as his ghostly visitors unspool his life before him. Scrooge himself becomes an unseen ghost—hovering over his father’s imprisonment, dancing with his old colleagues in an office party, or intruding on his employee Bob Cratchit’s (Jon Abella) efforts to make a sumptuous Christmas dinner with his meager salary.

These journeys become as much a lesson to Scrooge as to the audience. The growing empathy with the man behind the miser thus becomes a well-earned development.

The musical numbers by Alan Menken and Ahrens are no longer a distraction, but serve the plot and forward Scrooge’s transformation. They still add up to a bouncing blur of frenetic energy, but now there always seems a point underscored, or a dark undertow, in each moment of extravaganza.

And while each succeeding ghost is given a slight twist—the Ghost of Christmas Past (Franco Laurel) is a court jester, for example—
that ominous tone always keeps Scrooge in check.

When the journey ends, the stingy banker is a truly changed man, as seen in his newfound friendship with Bob’s crippled son, Tiny Tim. Other versions played this connection as Scrooge’s emerging compassion, or his way of paying forward.

While all that is certainly true, what this version shows is that it is Scrooge’s way to self-healing. He sees in the younger Cratchit his own inner child, the orphan boy separated from his family and forced to fend for himself in a hard world.

He has finally found himself, and a way back home—making this “Christmas Carol” a stirring, powerful tale of redemption. —CONTRIBUTED