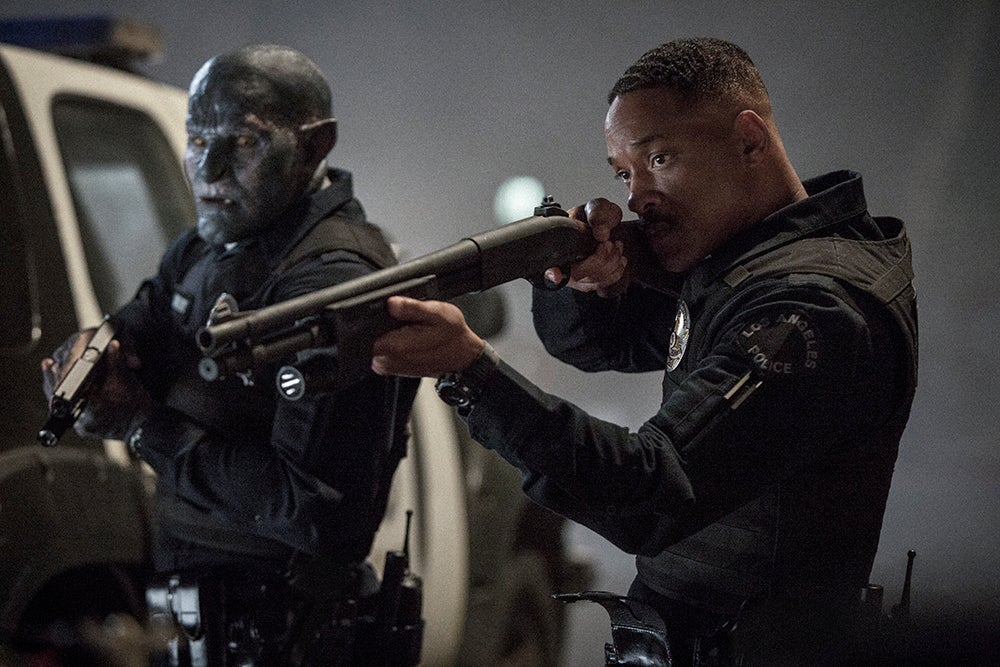 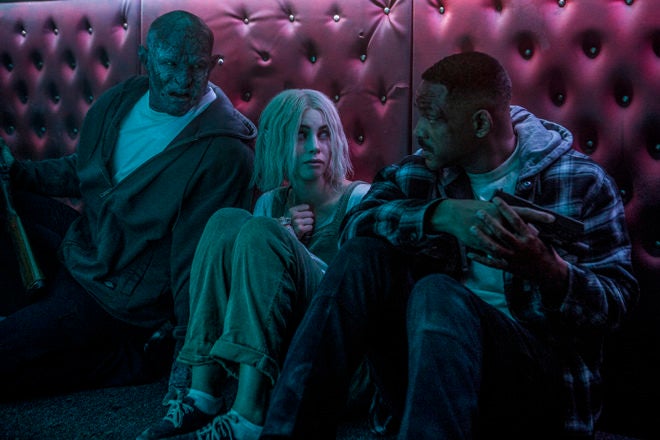 “When I got the script and I got to page 3 and Will’s character murders a fairy, I was hooked and then became very much in love with the character of an orc who is bullied by everybody,” said Joel Edgerton.

Welcome to a different Los Angeles, where fairies, orcs and elves coexist with humans. This is the world of “Bright.”

In this Netflix original film written by Max Landis and directed by David Ayer, Joel plays Nick Jakoby, the first orc to ever serve as a police officer on the Los Angeles Police Department. His partner is Daryl Ward, played by Will Smith, a veteran cop who isn’t exactly a fan of orcs. “As an African-American police officer in this world, to be racist against orcs, it was a very different social paradigm and in playing that, I learned a lot looking at the racial and class divides, looking at it from that angle in a science fiction movie,” Will said.

(Read: The world of ‘Bright’ according to Will Smith and David Ayer)

On night patrol one eventful evening, the two end up having to protect a young elf and a rare magic wand from evil forces, taking audiences on an action-packed adventure.

It’s “48 Hrs.” meets “Lord of the Rings,” a buddy-cop film with plenty of fantasy. “It’s an unusual movie. It’s a combination of different genres. The fun for me was telling a different kind of story in Los Angeles and changing the city to reflect this fantasy version of the city,” said David who also directed Will in “Suicide Squad.”

Producer Bryan Unkeless (“The Hunger Games”) said, “For us, the perfect filmmaker to do a movie like this is David Ayer. He has a very distinct visual style that lives within the streets of Los Angeles. We take his true understanding of that racial experience that he lived and then you kind of hybridize that with these fantastical elements.”

David, who grew up in Los Angeles, said, “The city is a character.” He shot many of “Bright’s” scenes in the streets of LA, focusing the spotlight on the city’s grit, something that is changing so fast in this age of gentrification. It took three hours of sitting in the makeup chair to transform Joel into the orc Nick. “The makeup was tough… But it was an incredible experience to play the character, such a beautiful character that David and Max created,” Joel shared with the media at “Bright’s” press conference at the Ritz-Carlton in Tokyo, the day after the film’s red carpet premiere in Japan.

Will said, “In terms of the chemistry between Joel and I, it was very very close to one of those classic Hollywood romances. When he would put that orc makeup on, it would just do something inside of me. ”

Noomi Rapace, who plays the film’s bad guy, an elf named Leilah, laughed, saying, “Magic disappeared every time he took it off.”

Makeup is just one element. So much work went into bringing to life the world of Bright—a testament to David’s dedication to authenticity. Actors who played cops had to go through tactical drills, go on ride-alongs with the LAPD and survive intense physical training, new languages and styles of movement were created and they all dug deep into mythology. 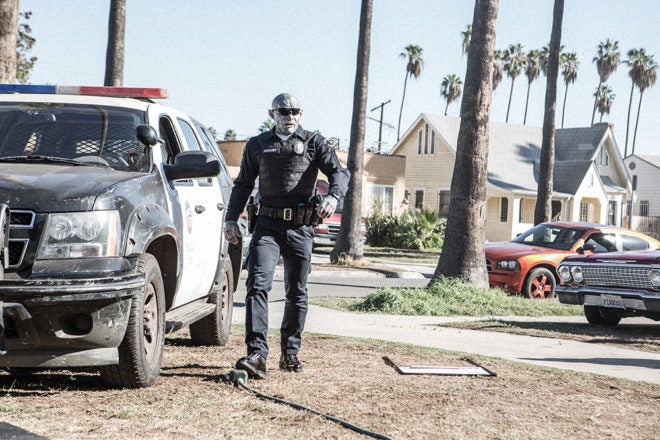 Bryan said, “David brings such detail to the design.”

We asked David—just how insane was this level of detail? “It’s pretty insane. For me, the camera frame is like a mosaic. I like a complex frame, I like a lot of detail. And the detail also tells the story. My theory is it tricks your mind into believing that world because there’s so many things that feel true, billboards and signs and the shops… all that works together. I’m obsessed with the color of the wall, the costumes, everything has to work together. I can’t explain it, I just know when I see it. It’s a difficult process.”

Bryan said, “This version of this movie ‘Bright’ could not exist without Netflix… They offered the most resources to make the film and including creative controls that other studios weren’t willing to give.” 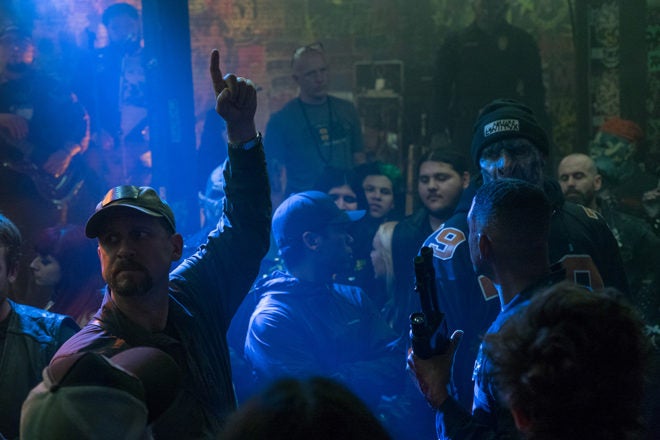 “Everything about the production was identical to a major big budget Hollywood feature,” Will said, before adding that there was a big difference. “If a studio is going to spend more than a hundred million dollars on a movie, then they have certain creative demands because of the risk profile for that kind of spend. So that kind of creative demand, it jams the creative process in a way that you couldn’t even make a movie like ‘Bright’ at a studio because of how much it costs. Just the very cost of it changes the entire creative process. It has to be PG13, they’re not going to make a hundred plus million dollar that is not about an IP (intellectual property) that is not historically proven.”

The filmmakers relished the creative freedom they got from Netflix. “Making ‘Bright’ was wonderful for me because Netflix is very nourishing to filmmakers and really let me have my voice,” David said. “Mostly when you direct, so much energy goes into the politics and into the money, the budget and sometimes it feels like you’re making a budget and not making a movie. I got to make a movie this time.”

“Bright” is a thrilling ride injected with a dose of comedy, something that was important to the filmmakers.

Producer Eric Newman, who began his career as a production assistant on “Saturday Night Live,” said, “If there wasn’t humor and lightness… this would be a very very dark film so it was essential.”

Bryan added, “One of the nice things about Ayer is he is able to find that tonal balance… it allows people to go on a real ride with our characters in a way that is exciting and fun and intense but also really funny. He finds that little moment… and Will does, too. Some of that’s improvised. Will and Joel they play off one another, their chemistry is such that it feels authentic, it feels fun. There feels like a real brotherhood there that forms.”

“Fairy lives don’t matter today,” Will quips in one scene.

But for the cast and filmmakers, the movie isn’t just pure entertainment. David said, “It’s a great opportunity to make a movie with a message in it. It’s just a nice way of telling a story about ourselves and the problems we need to solve without being preachy.”

Eric said, “This is about race. For me, all the best science fiction, there’s a mirror that’s held up and shown to our society. The analogies to race in the film are very clear. It’s not hitting anyone over the head with the message but the message is there.”

Bryan said, “We end up reading a lot of scripts. You often find projects that are, on one side of the spectrum, pure popcorn entertainment. Then you see scripts that are really important, they feel like homework. What’s nice about ‘Bright’ and the other movies we’ve worked on is they find that little balance. They’re fun, people enjoy them. We have that conversation about class and race in this movie but you don’t have to hit them over the head with the message of it. It’s just there subtextually.”

Joel added, “I felt like the whole script was saying something about bullying en masse… the way we bully each other as cultures, as religions and as racial groups. I love the responsibility of playing the person who represents everybody who is judged and bullied and mistreated when all they want is to be judged on their actions and their merits and not the color of their skin or the group they belong to.”

It’s a story about race but it’s also a tale about friendship. David said, “I think about my work and there’s a lot of bromance, a lot of male bonding. The heart of the movie is really that friendship, that chemistry.”

Bryan said, “We wanted it to be a fun, exciting, action-packed movie first and foremost. We want people to have an enjoyable ride. ”

“Bright,” which became available on Netflix on Dec. 22, is the company’s big holiday release. “Hopefully people will be with their families and just enjoy being together and watching this movie,” said Bryan. “If you get tired of listening to your aunt and uncle, go watch ‘Bright.’”