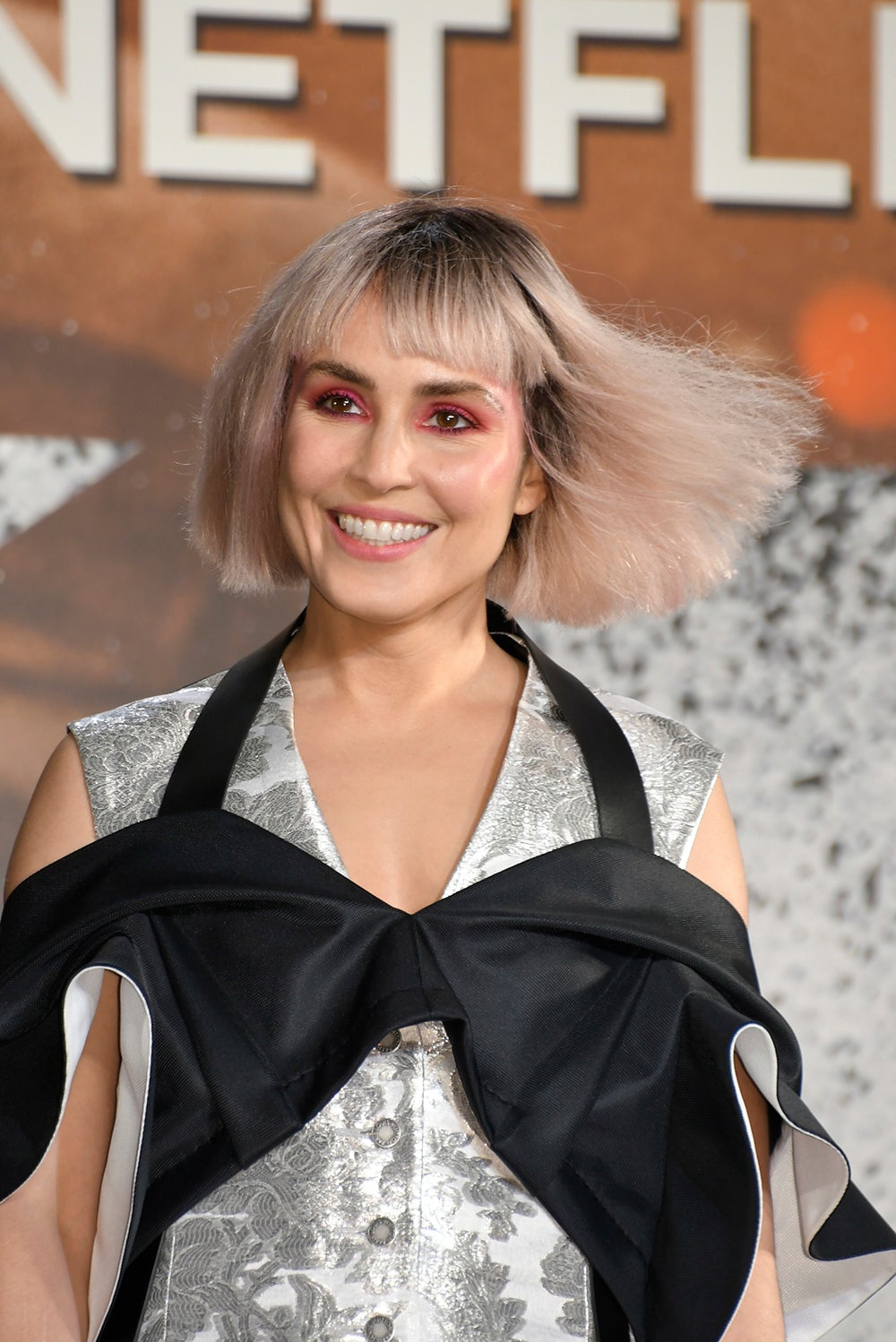 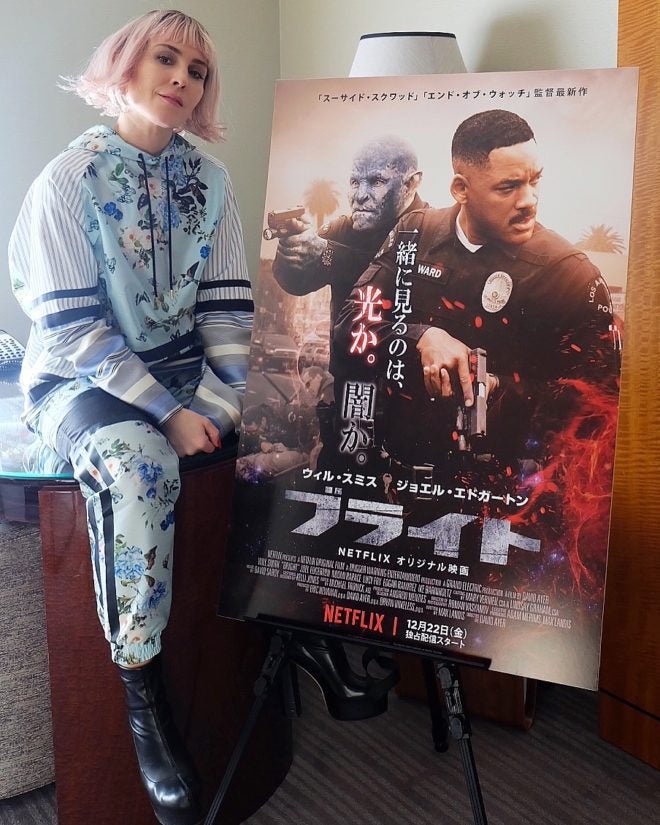 There’s no denying it—Noomi Rapace is a total badass. She is, after all, the actress who played Lisbeth Salander in the Swedish films based on Stieg Larsson’s “The Girl with the Dragon Tattoo” trilogy. You can’t play Lisbeth and not be tough yourself.

Noomi said, “Strong is not something you are constantly. Strong is a decision. It’s something that you struggle and fight for. I decided when I was young that I don’t want to be a victim. I grew up far from my friends, we didn’t have money. I didn’t come from a family that had a strong position in society. So I decided, ‘Okay, what do I want to be? Who do I want to be?’ And I climbed an emotional and psychological mountain. It doesn’t matter if you’re an actress or not, wherever you are in life and in the world, there’s always a wall you can climb.”

Noomi continues to choose complex roles. “They’re all struggling, there’s a battle going on inside them. I like when I read the script and there’s questions in me about the character. If the character is too set in stone, “Oh this is the good girl, oh this is the sexy neighbor,” that is not for me. I like when I feel that something is cracked inside, there’s a lot of layers for me to discover,” she said. “Friction is always more interesting than peace for me as an actress.”

In “Bright,” Noomi plays Leilah, an elf determined to bring the Dark Lord back in power. 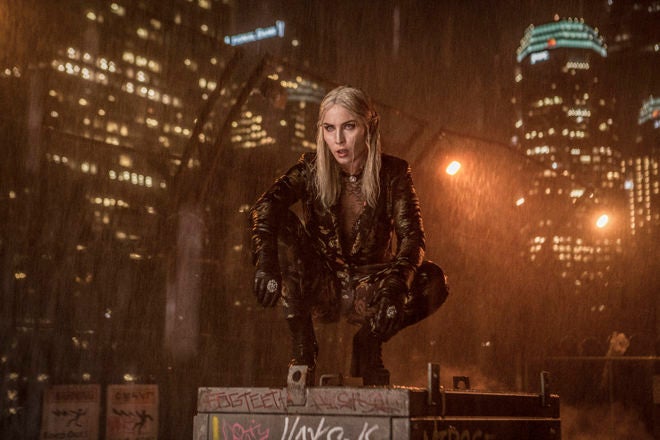 (Read: The world of ‘Bright’ according to Will Smith and David Ayer)

At the Ritz-Carlton in Tokyo, Noomi shared how she transformed into Leilah, a character she fell in love with. “I’m a perfectionist and I always wanna give a hundred percent. It was a lot of rehearsals with the fight team, practicing with my knives, my guns, sleeping with them in my bed.”

She collaborated with director David Ayer in creating Leilah. “He was texting me in the middle of the night: read this poem, listen to this song. He doesn’t judge his characters, he carries them and lives with them. It felt like we were both holding Leilah and bringing her to life together.”

She spent weeks perfecting the way Leilah moves. “It’s almost like she’s not touching ground. She has a stillness to her.”

She listened to Celtic music, recalled living in Iceland as a child and digging into her roots.

“In Iceland, there’s a lot of stories about elves. I was interviewing my grandmother in Iceland about her beliefs.”

Noomi also had to learn an entirely new language: Elfish. “It was hard. I tried to draw images in my head to have something to memorize it to, to connect it.”

The fight scenes were a challenge too, especially since she had to shoot them in heels. But that didn’t stop her from kicking Will Smith’s ass.

She said, laughing, “Nice, right? Boom. He’s such a good human being, so supportive, very respectful and he makes you feel special, he takes care of you. It’s very unique in our business. ‘Oh you were awesome, that was great, keep doing that, keep kicking my ass.’ He was very playful. He made it very easy.”

Noomi is excited about “Bright”—she likened reading the script to her experience of watching “Star Wars” or “The Matrix” for the first time. “I think it can be the beginning of a new cinematic universe.” 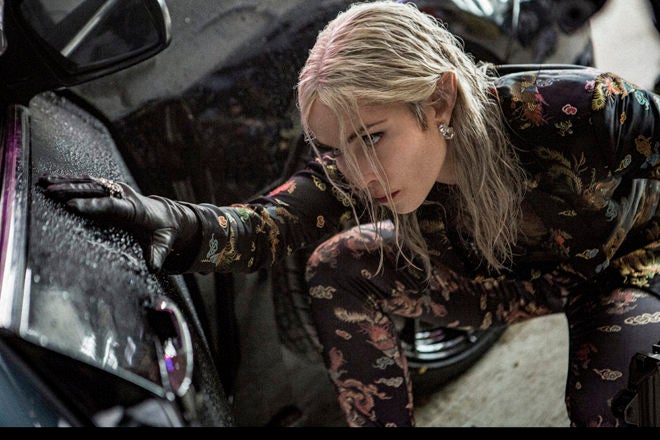 “Bright” isn’t Noomi’s first experience with Netflix. The company purchased the film “What Happened To Monday,” where she played seven sisters, for streaming in certain countries. “I feel very honored to be a part of this change. I love that when ‘Bright’ opens, people in 190 countries can see it at the same time. That’s really powerful. In Sweden, where I grew up, we were waiting for the films. We were so behind. I really like that Netflix makes it possible for people to watch at the same time. It’s a united experience.”

She watches Netflix with her 14-year-old son who is studying in London. “Now we’re watching ‘The Punisher.’ Before that we were watching ‘13 Reasons Why’ and ‘Atypical.’ My son is like, ‘Mom, I have a new series for us.’ Then we Skype or we FaceTime, I’m in makeup in some remote country and he’s like, ‘Okay, have you seen this?’ We have this deal that we don’t watch it without each other. Even if we’re in different countries, we can watch it and share the experience.” 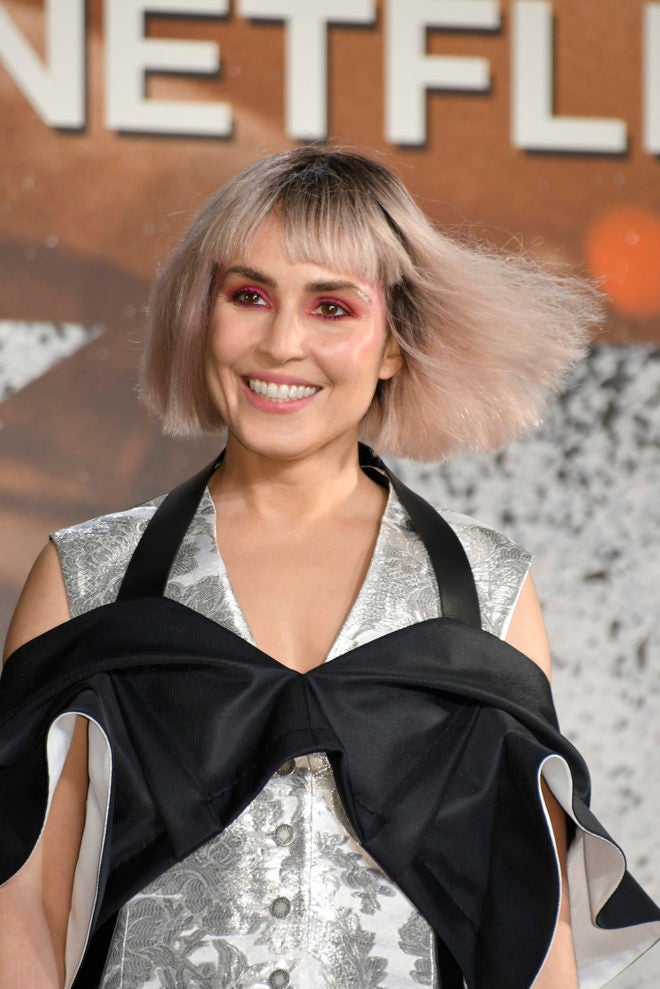 This badass is planning to take a break from all the fighting. “The films I committed to now is more pure acting drama… I’ve been doing a lot of action. I’ve got to save my body, I broke my nose, I’ve got a broken bone in my foot. My body is like a map of scars… The next movie I’m doing is in Australia with a female director. It’s pure acting, no guns.”

Noomi is only taking a break from fight scenes—not from being a badass. Asked to comment about Hollywood’s sexual harassment scandals, she said, “It’s the old structure of women not wanting to make too much noise, not wanting to be a problem. We need to be problems. We need to speak up. Our business needs to be equal like today, right now,” she said, snapping her fingers. “That goes for every industry. It’s a time of change and I embrace it. It’s a very old structure where women are cute and beautiful in the background and kind of serving men. That time is over.”