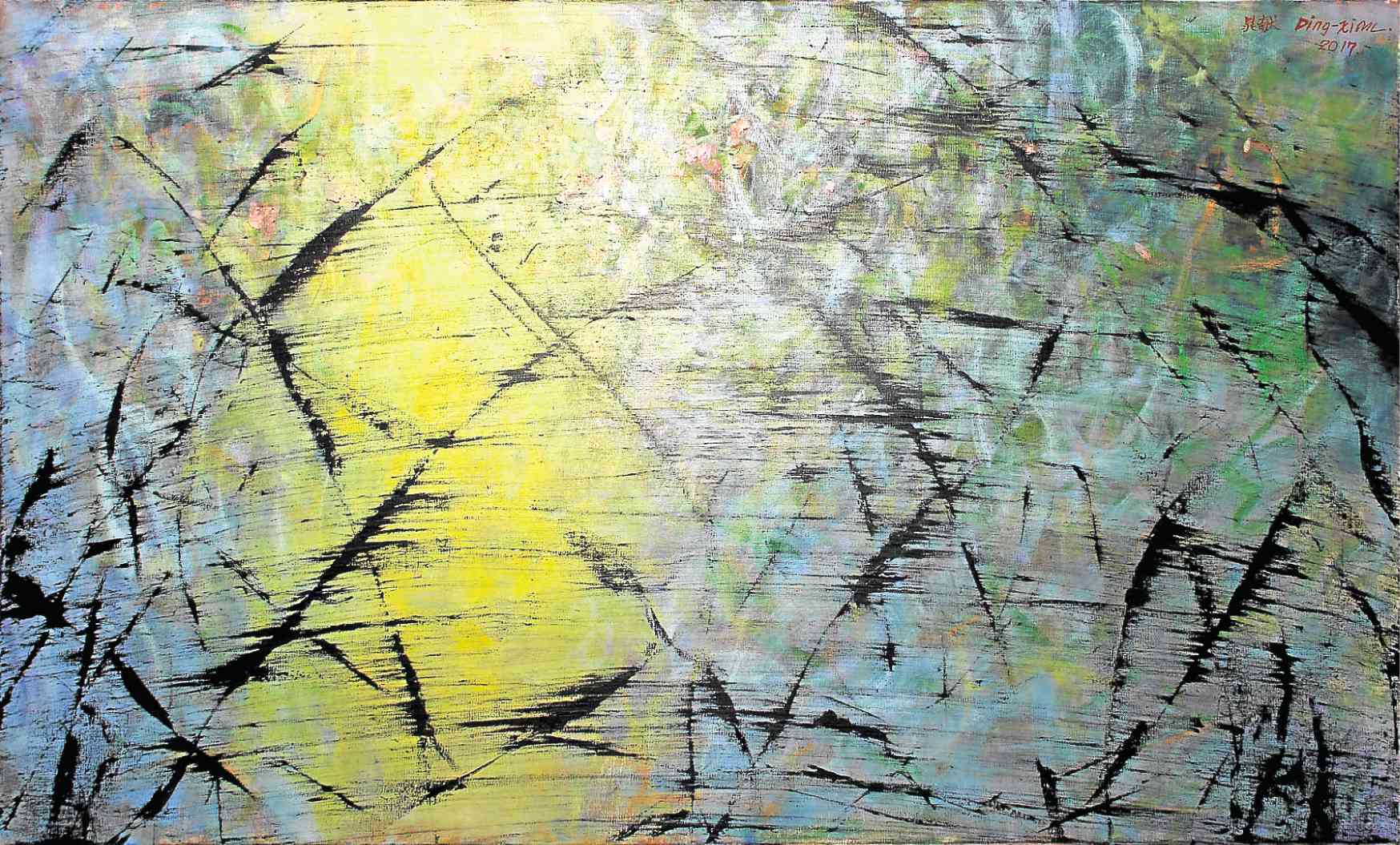 Taiwan master Yang Ding-Xian does Chinese calligraphy and paints Chinese genre works but using contemporary mediums. He uses oil and canvas instead of ink on paper in calligraphy and water-based colors on paper or silk of traditional Chinese painting. Some of his works are in mixed-media.

He also innovates traditional Chinese genres. In his “Line” Series, he integrates binary numbers; in his “Mountain” Series, he inverts the ancient Chinese symbol for mountain. He has expanded the character that symbolizes happiness so as to put in a flower.

Born in 1966 in the village of Houli, Taiwan, he was raised by his mother and stepfather after his dad passed away. While the stepdad treated him like his own, his family was so poor he had to start working at 5, attaching gold leaf to gold paper, working until he could no longer keep his eyes open. This he did day in and day out, he even had recurring dreams of attaching gold leaf to gold paper.

In grade school, Yang switched to stringing rackets, a task so repetitive one day he learned to string rackets with his eyes closed. Regardless how well he performed in school and won awards for painting, his mother remained distant and unaffectionate, never once showing any emotion.

At an early age, Yang developed a serious inferiority complex, he said.

The only thing that kept him going was his love for painting. So, despite his mother’s opposition, he gained admission to the Department of Fine Arts at the Chinese Culture University in 1992.

Four years later, he participated in his first group exhibition, and by 1998 mounted his first solo exhibit.
He has been winning awards since, including the Nanying Outstanding Award in Oil Painting, and the Chinese Arts Association Medal in Mixed Media.

Yang completed his graduate studies at the Institute of Design, National Taiwan Normal University, in 2000; and in 2013 earned his doctorate degree from China Central Academy of Fine Arts in Beijing.

Last year, Yang showed his work outside Taiwan for the first time when Makati Shangri-La Manila showed his artwork in the exhibit “East Wind Rhapsody.”

This year, his solo exhibit opened at Yuchengco Museum, RCBC Plaza, Makati City. Titled “Blessing Manila, An Offering of Hope to the Philippines,” the exhibit is ongoing until Jan. 16.

There are blooming plants. Even our Jasminum sambac of the jasmine family is in his works.
“He sees Manila as very colorful—especially the jeepneys. You cannot see any car like that anywhere in the world,” Tsai said.

In the “Flower” Series, he brings together images of flowers with modern-day emoticons in color palette inspired by the fashion world.
There are butterflies, too—a symbol of change to the Western mind but a bearer of luck to the Chinese, bringing in Oriental philosophy into his work. said Tsai. (Yang admits that works contain the philosophical work of the Daoist Lao-Zhuang, with both Laozi and Zhuangzi considered the Socrates and Plato of Daoism.)

Yang remains true to his Chinese heritage—his rigid discipline certainly stems from it—but likes to employ western oil in his paintings because they “can produce vast visual changes to express Oriental ancient wisdom, and to impart the richness, reserved and elegance of Oriental beauty.”