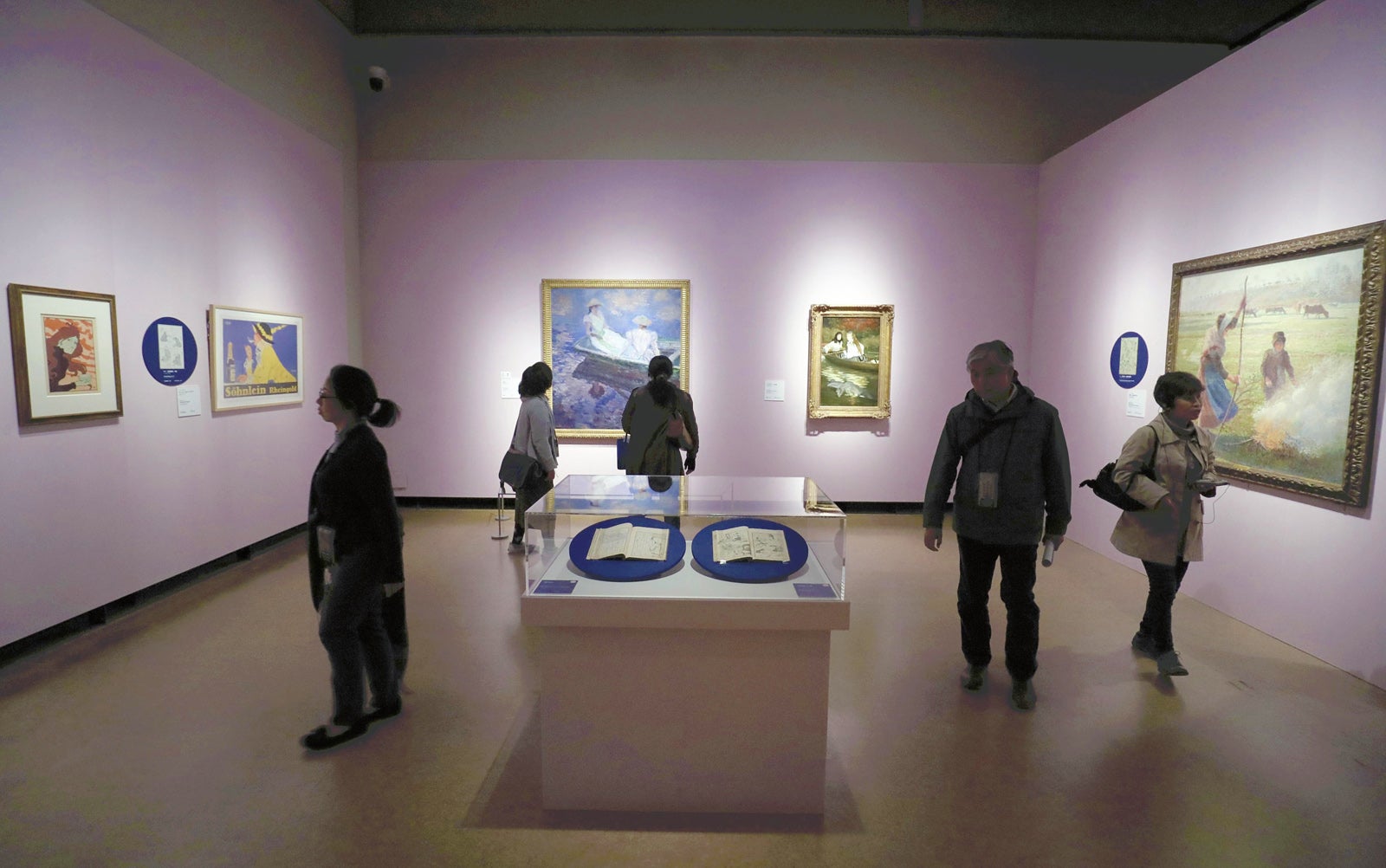 The National Museum of Western Art in Ueno, Tokyo, usually closes at 5:30 p.m. But on Nov. 15, a string of people filed through the entrance at 6 p.m. to attend a special viewing session of the “Hokusai and Japonisme” exhibition, which runs until Jan. 28.

This event was designed to let visitors better admire the artworks on display, with a similar one also held on Oct. 25. Both sessions were limited to 300 people each who could view the exhibition until 9 p.m. Tickets cost ¥3,800, significantly more than the regular ¥1,600 admission fee, and came with an audio guide and a smaller version of the show’s catalogue. Both events were sold out.

During the session, the venue was quiet, allowing visitors to focus on appreciating the artwork, as they did not have to jostle with others for a spot in front of any of the items. “I could stand right in front of the artworks, and it felt like I was the only one viewing them,” said Risa Kamitsuji, a 21-year-old university student from Shinagawa Ward, Tokyo. “It was such a luxury.”

In recent years, art exhibitions that get large crowds have begun holding similar events for limited numbers of visitors. For example, the Tokyo National Museum’s “Unkei: The Great Master of Buddhist Sculpture,” which finished last month, was so popular that visitors sometimes had to wait up to 70 minutes to enter the facility.

The museum held two special viewing sessions for a limited number of visitors on Sept. 25, the day before the exhibition opened, and on Oct. 12 after the regular exhibition time closed. Tickets sold out for both of these events as well.Noisy kids no problem

Speaking loudly at an exhibition is often considered a disturbance and can bring warnings from the staff in accordance with the museum’s rules. However, some visitors say they’d like to freely discuss their thoughts with friends or take their children along without fear of bothering others. To that end, the Mitsubishi Ichigokan Museum, Tokyo, which is currently holding the exhibition “Prints in Paris 1900: From Elite to the Street,” has been offering special events on a trial basis in which visitors can speak as loudly as they like.

The museum in Tokyo’s Marunouchi district holds these special events on days when it’s usually closed. The first such event on Oct. 30 attracted about half of the number of visitors on a regular day. Some attendees were grateful for the chance to go along. “I thought I wouldn’t ever be able to see these artworks if I missed this opportunity,” said a woman with a baby.Yukiko Goto, a public relations official at the museum, said: “We should respond to the needs and trends of the times. We want to hold these events more frequently.” The museum plans to hold another such event on Dec. 25, before the show closes on Jan. 8.

In April, the Mori Art Museum in Tokyo’s Roppongi district invited about 20 people who have many followers on Instagram to a special event held after the museum closed for the day. They were allowed to freely photograph the exhibits in a plan designed to utilize word-of-mouth to attract more visitors. In the nearly empty venue, the participants sat or lay down to take photos perfect for posting on the image-sharing service.Photos were also allowed during the regular viewing times for the exhibition. “The event went well, as the number of Instagram posts about the exhibition has risen 1.5-fold since then,” said Nahomi Taki, a PR official at the museum.

Museums usually use holidays and the time after closing to check items on display and clean the facility. “It won’t interfere with our operations if we use such days or times for special events as long as it’s about once a month,” Mitsubishi’s Goto said. “We’ll work even harder to set our museum apart from the rest.”

Eiji Mizushima, president of the Japan Museum Management Academy and a professor who specializes in museology at the University of Tsukuba, said these special events are “very worthwhile” because they generate new art fans and help a museum stand apart from others. “Of course, they increase the burden on staffers,” he added. “To continue with these campaigns, it’s also essential for each museum to properly prepare to handle any unexpected accidents.”