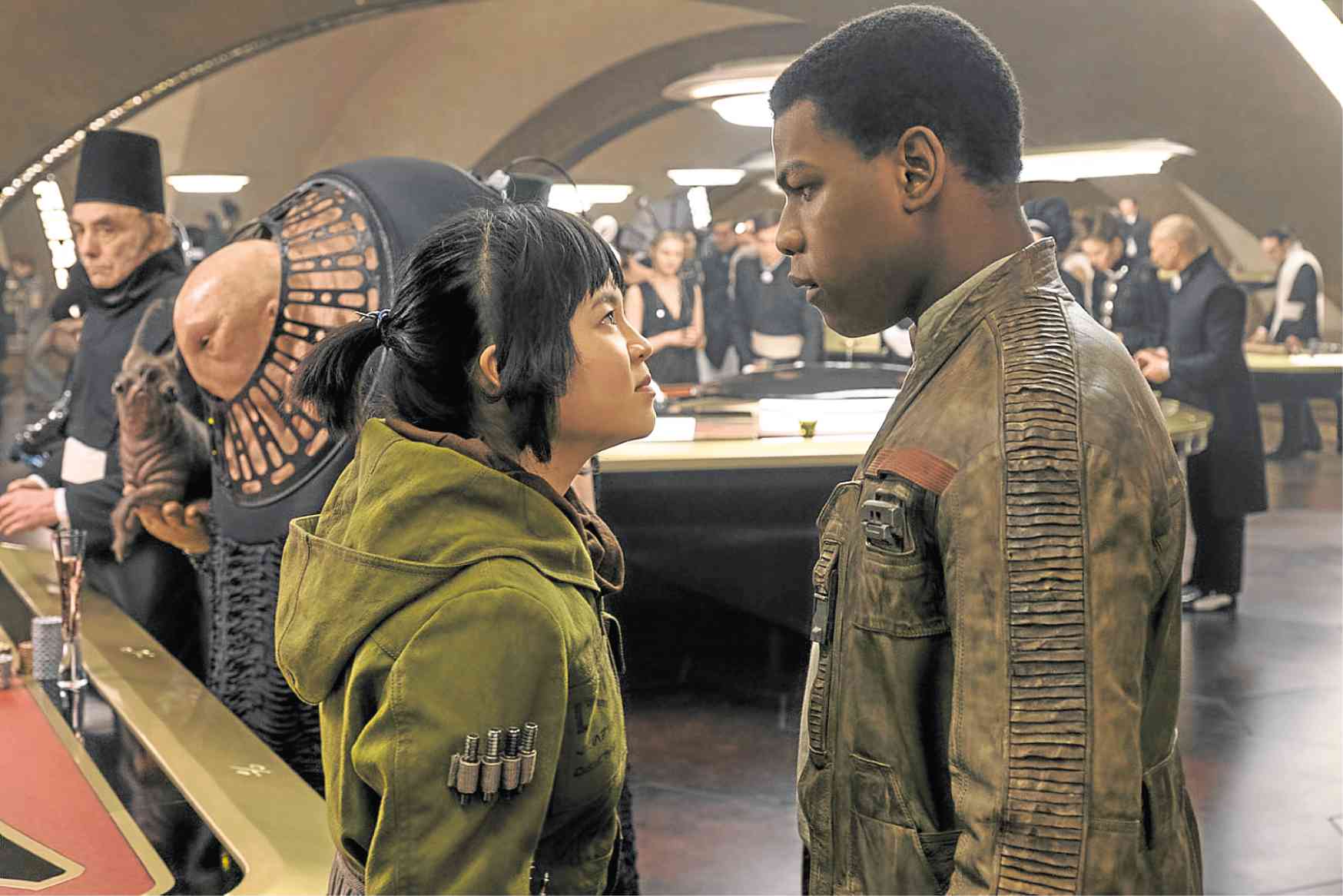 ‘Star Wars: The Last Jedi’ gets a multiracial cast–finally

Even as “Star Wars: The Last Jedi” lays waste, Death Star-style, the box office, the movie is also doing away with something previously omnipotent and omnipresent—bad Hollywood casting choices. This is a very positive development, and one that truly brings the Star Wars franchise into the current era.

When “Star Wars: Episode IV–A New Hope” first appeared in theaters in 1977, it was much a product of its time. George
Lucas—working on what he called “the most expensive low-budget movie ever”—never intended any kind of slight when he cast his film. But a scan of the characters already shows what was common then: a cast almost completely populated by white males, even though this was set “a long time ago in a galaxy far, far away,” and one would assume there would be a greater variety of humans amid the aliens.

The most obvious exception was Princess Leia, played by Carrie Fisher. Yes, Princess Leia was a forward-thinking role, not a damsel in distress, a leader who could rescue herself, as Mark Hamill described her.

But the prominence of the role, all the way through to 1983’s “Star Wars: Episode VI: Return of the Jedi,” obscured the fact that she was the only major female character in the trilogy.

The Rebellion’s pilots even lost one of their female characters in “Return.” There is a documented case of a female actress (British actress Poppy Hands) who was playing one of the A-Wing pilots getting dubbed over with a male voice in the final cinematic version of the movie.

The Rebel pilots also give short shrift to non-white human characters. There are no Asian actors in the first two films, and “Return” has a Rebel Y-Wing pilot played by an Asian actor, but this role is so microscopic he gets only two lines (“There’s too many of them!” and “I’m hit!”) and the role itself is officially uncredited.

The original trilogy’s color problem is again obscured by the prominence of Lando Calrissian, played by Billy Dee Williams. But not only is Williams the only black character in the original trilogy, he arguably plays a bit of a stereotype, a jive-talking, slightly shady smuggler.

Sixteen years later, the prequel trilogy, beginning with 1999’s “Star Wars: Episode I–The Phantom Menace” retains the problem of only one female lead character—Natalie Portman’s Amidala—but at least it was addressed when many more actors of color landed in the cast.

The most interesting role was that of Kiwi actor Temuera Morrison (who is of Maori descent), who not only played the bounty hunter Jango Fett but, because he was the basis of the clones first seen in “Star Wars: Episode II –Attack of the Clones,” essentially makes all the clones characters of color. That wasn’t quite enough to overcome the absurdity that was Jar Jar Binks, but it was a start.

But the “Star Wars” franchise has gone into diversity hyperspeed with the new trilogy.
“Star Wars: Episode VII–The Force Awakens” featured a female lead, Brit Daisy Ridley, as well as a black actor in a lead role, Brit John Boyega.

In interviews, Boyega made fun of the reaction to his casting—“A black Stormtrooper?”—amid complaints from one “Star Wars” purist about Finn and Rey.

The complaints about the SJW (Social Justice Warrior) casting in the “Star Wars” universe only increased with the new movie, 2016’s “Rogue One: A Star Wars Story,” which also had a female lead (Felicity Jones as Jyn Erso) and two Asian actors (Donnie Yen and Jiang Wen) amid a clearly diverse cast.

If the original trilogy was the “Star Wars” franchise’s childhood (full of wonder and discovery), and the prequel trilogy was its adolescence (angsty and problematic), then the new trilogy must be its adulthood and the casting reflects this.

“Star Wars: The Last Jedi” really feels like all human races are represented in the right volume in the “Star Wars” universe. Rey continues to be the most popular and prominent character, but she is joined by great characters like Laura Dern’s Vice Admiral Hodlo, a role which could have easily gone to a white male in the past.

It is only fitting that Fisher is also here in her last film appearance, an icon till the end.

Females are now an obvious part of the Resistance (formerly the Rebellion), with one of the wings even led by female pilot Tallie (Hermione Corfield).

But the most welcome aspect of the casting of “The Last Jedi” has to do with Asian actors, who have been seamlessly woven into the story. “Force” featured one actress of Asian descent as an X-Wing pilot (“Iron First” actress Jessica Henwick) but “The Last Jedi” has one of the most prominent roles played by another, Kelly Marie Tran, an American born to Vietnamese parents.

Tran’s Rose, a smart, if unsure, Resistance technician, joins Finn on a crucial covert mission behind enemy lines. Finn and Rose share many scenes together, including one with Rey, and just these three people headlining a “Star Wars” movie shows how far the franchise has come in terms of casting.

“The Last Jedi” features Asian actors even in background and crowd scenes. Instead of being distracting, these appearances feel just right, that a galaxy with so many planets should indeed be represented by humans of many different backgrounds and blood. It works. It makes sense. It makes the universe a bigger, more inclusive place.

Instead of the forced casting claimed by stuck-in-the-past “Star Wars” fans, the casting in “The Last Jedi” is representative not only of the movie’s population but that of its audience as well.