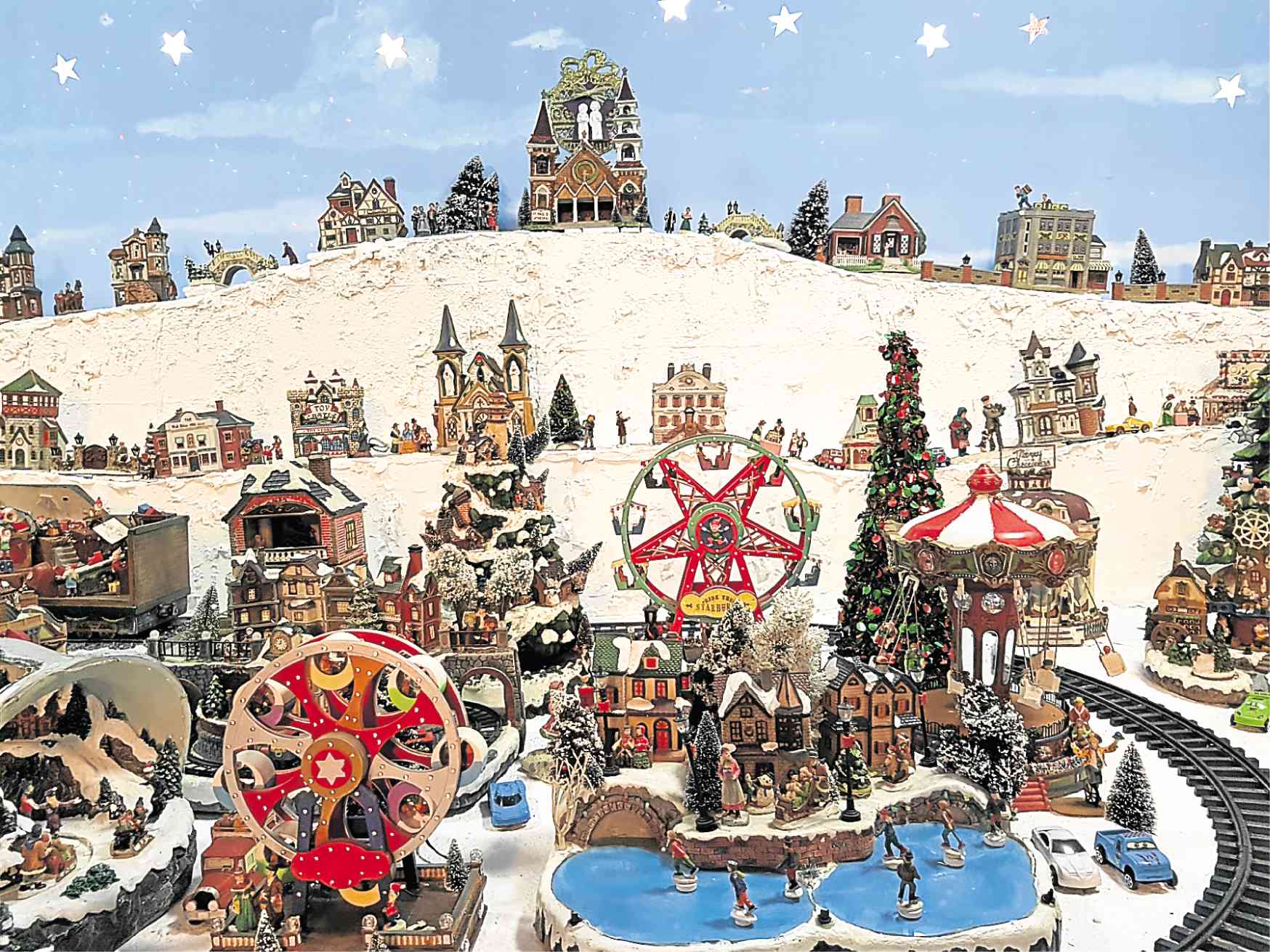 The Christmas village has been an attraction in the Reodica home for nearly two decades.

Chit Reodica’s Christmas village brings out the child in everyone

Christmas is the favorite time of the year for former Health Secretary Carmencita “Chit” Reodica and others who have seen her Christmas village at home.

For Reodica’s relatives, friends and colleagues, a visit to her Christmas village has become a holiday tradition. Her heart is filled with joy that she brings happiness to people who have seen it.

“Christmas is really about giving, rather than receiving,” said Reodica, who has spent more than half her life as a public health worker and government administrator.

In 1996, then President Fidel Ramos named her Health Secretary, the first woman to hold the portfolio.

“I don’t want people to forget why we are celebrating Christmas in the first place,” she said.

A nearly life-size Nativity set in her garden greets visitors as soon as they enter the wrought-iron gate. Years ago, children from a nursery school in the village where Reodica lives would visit her house every Christmas.

“I’d bring them to the Nativity set and tell them that Christmas is the birthday of Jesus,” she recalled.

It was also the birth of her eldest grandchild, Mariah, 23 years ago that got Reodica hooked on decorating her home.

Mariah was a three-month-old baby when Reodica went to the United States in 1994 as an official of the Department of Health (DOH) to promote the Doctors to the Barrios program of then Health Secretary Juan Flavier.

The first-time grandmother was so excited that she bought a 10-foot Christmas tree in Los Angeles. Ornaments included Mickey Mouse and Winnie the Pooh holiday decor.

As the years passed, two other granddaughters came, Aaliyah and Tamia. Reodica made sure Christmas was extra special for them.

Her collection of Christmas decor also grew, enough to make an entire Christmas village. From the living room beside the Christmas tree, she moved the village to an adjacent receiving area.

Relatives, friends and colleagues would gift her with Yuletide ornaments to add to her Christmas village and her Santa House, which occupies the lanai.

She also realized that preparing for Christmas was actually for herself, and not just her granddaughters: “I feel like a child again whenever I set up the village.”

There’s also an inexplicable gladness, she said, whenever she sees each visitor truly appreciative of the magic. But she admitted that her favorite time of the year also makes her nostalgic.

Her affiliation with several organizations proves that she remains busy as ever, however.

She is also part of the Center for Health Innovations and Solutions and is still a consultant in the city governments of Malabon and Pasig.

Her weekly mahjong games at home with friends and neighbors also keep her preoccupied.

Visitors to her Christmas village cut across generations. She herself is amazed that, from seeing pals of her son, Joey, hang out in their home during Christmas, now the friends of her college-age granddaughters have their photos taken beside the Christmas village.

Reodica allows children to bring home some of the small pieces from the Christmas village that can easily be replaced, like the toy cars. She also lets them rearrange the village.

Many pieces in the Christmas village are the same age as Mariah. Almost every part is original and is in good working condition. The train that goes around the village tends to derail from time to time, but Reodica herself would try to fix it.

But among the nearly 1,000 priceless pieces on display, the oldest among all is her favorite—the Disney carousel, a gift of her former husband Romy to their son Joey.

Joey was around six years old when his dad gave him the carousel, Reodica said. That would make the toy around four decades old. It still works.

It takes her a whole month to put together the Christmas village. The Reodicas have never replaced the Christmas tree that she bought 23 years ago.

She starts to assemble the village early October and makes sure she completes it by Nov. 1. “So, after the kids in the subdivision go trick or treating, they proceed to the Christmas village,” she said.

Last year, she had laser lights installed at the facade of the house. This year, her “obsession” is the fake snow she wants to put in the Santa House.

A well-meaning relative once advised her to just cover the Christmas village for the rest of the year and take the cover down for the holidays, to save time and effort.

“But that would take away the excitement of setting everything up!” she said.

Even when she was Health Secretary with a hectic schedule during the holidays, Reodica made sure she devoted time for her family.

“You find time for yourself and your family. Christmas is the best time to make yourself happy, and I am happy setting up this Christmas village,” she said.

There was only one Christmas when she thought that it would be the last time—when son Joey told her that he and his own family were thinking of moving out and staying in a place of their own.

“I thought that would be the saddest Christmas for me,” she said. But, lo and behold, Joey and wife Linette changed their minds.

This year, Reodica again felt a tinge of sadness because, for the first time, Joey and his family are abroad.

“I told him, ‘Joey, do you realize that after 48 years, this is the first time we aren’t spending Christmas together?’ Then he reminded me that I have always told him to look at the positive side of things. Which meant the two of us have spent Christmas together for the past 47 years! I almost fell off my chair! Nakakainis, naisahan ako ng anak ko,” Reodica said with a laugh.

The Christmas spirit in Chit Reodica is alive and well.