From Spain to the Philippines, a mutual love of pork | Inquirer Lifestyle 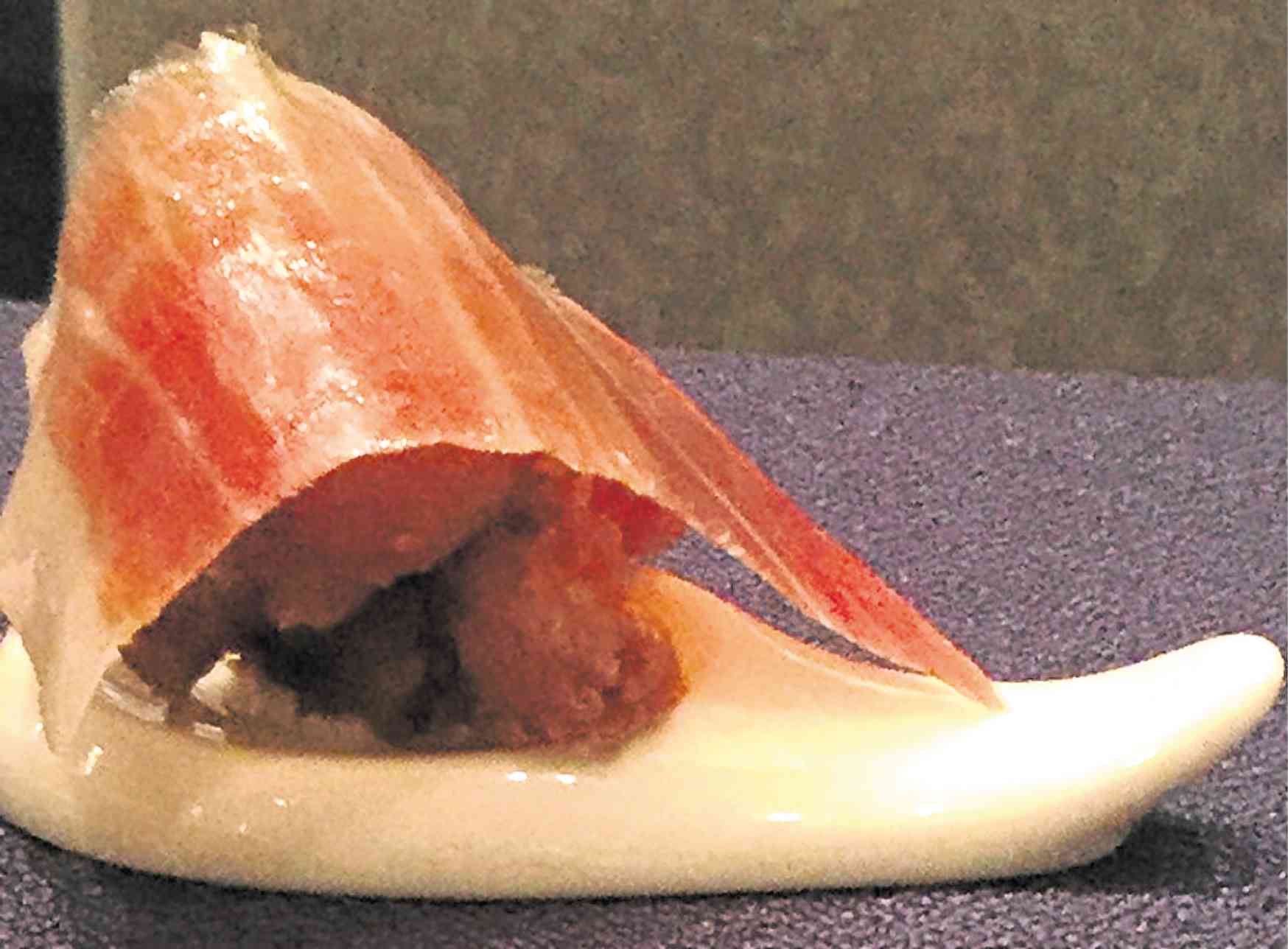 From Spain to the Philippines, a mutual love of pork

Catalonian independence has been one of the key foreign events lately. We were thinking of it while attending an Interporc event at Raffles Makati.

Interporc is an organization that represents the white pork industry of Spain. The color distinction is necessary to distinguish it from black pig providers.

As with most food industry promotions, a chef is necessary to demonstrate how a particular ingredient can be cooked and presented. Kisco Garcia is the chef from Cordoba whose restaurant, Choco, has earned one Michelin star. But it is his restaurant in Malaga, KGB (Kisko Garcia Bar) that is well-known for its tapas.

The recipes were quite simple and doable. Croquetas (fritters) were made with chopped chorizo and bacalao (cod), then served covered with a slice of jamon Serrano. It reminded us of a cocktail called Pigs in a Blanket.

Garcia’s take on beef Wellington was a great idea for those daunted by the complicated French recipe. Pork tenderloin was used, then wrapped in a puff pastry. His pork belly buns were like cuapao.

Asked after the demonstration if, indeed, he was inspired by the Chinese dim sum item, Garcia said he had previously visited Manila and had eaten cuapao.

The other half of the program was spent watching a maestro cortador, or an expert ham slicer, do his work. Antonio Baena is a much-awarded cortador who cut thin slices of the ham leg in almost equal square pieces. Of course, everyone was eager to grab the first available slices, which quickly disappeared.

Baena didn’t lose concentration even as he answered questions—about his knife (thin and flexible), his craft, and how he became a master (he trained under apprenticeship).

He smiled as we said that the ham bone would be used in many of our Spanish-influenced dishes. And to supplement the jamon, different kinds of chorizos were brought in.

Interporc’s representatives informed the meat-business people at the event that the Philippines imports offal, fat back and skin from Spain for our chicharon.

Interporc hoped it could fill the gap created by the huge demand for pork here and the low supply of the local pig industry.

That was what the company last year told the media invited to its facilities in different parts of Spain. New information was that the Chinese market had grown.

I guess Interporc loves our country that loves pork.

Interporc has brought food writers around Spain, which was why Catalonia came to mind because we visited two places in that region. One was Girona, which was the focus of reports on the day of the outlawed referendum for Catalonian independence.

Girona seemed like a quiet town, but it was also the location of one of Spain’s most famous restaurants, El Celler de Can Roca. Two of three brothers who were chef-proprietors of that restaurant, Joan and Jordi, were speakers at Madrid Fusion Manila.

We were brought to Ca la Pilar, a more traditional restaurant owned by their relative. We were amazed at how families keep their restaurant traditions.

A picture at the entrance showed the original restaurant, called Casa Pila, established in the 1950s by the parents of the present owners.

Ca la Pilar is known for its chuletas, huge broiled steak, which was tender and had a wonderful taste.

In Barcelona, meanwhile, a must-visit place was St. Josep La Boqueria, the best place for seafood like sardines cooked simply—grilled, then showered with olive oil and lemon.

But since our host is a pork company, we were steered to a place where a pink papier-maché pork head didn’t have to announce the house specialty.