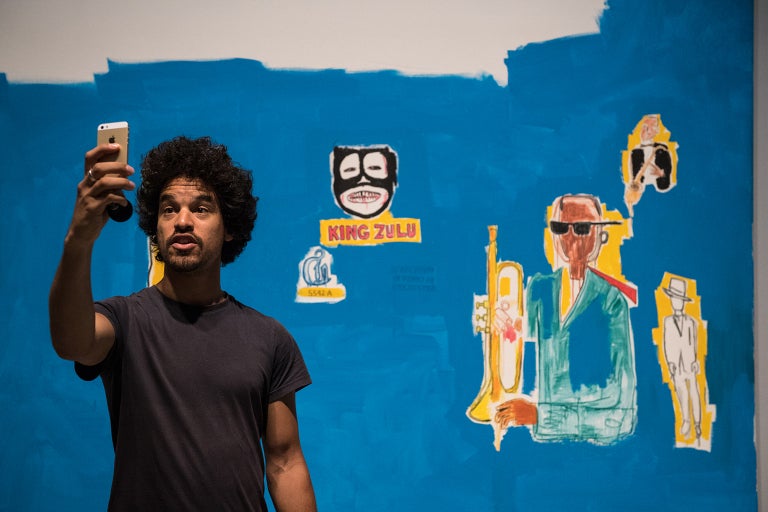 A man videos himself in front of 'King Zulu' by Jean-Michel Basquiat during a press call for 'Basquiat: Boom For Real' at the Barbican in London on September 20, 2017. AFP/Chris J. Ratcliffe

The Fondation Louis Vuitton in Paris has announced a major 2018 exhibition devoted to New York artist Jean-Michel Basquiat, while a massive Basquiat show wraps up in London early next year before moving on to Frankfurt.

The monographic exhibition at the Fondation Louis Vuitton opens in October and will be spread over the four floors of the Frank Gehry-designed building. Focusing on the artist’s short but influential career (from 1980 until his death in 1988); it will present around 100 works, such as the “Heads” series (1981 to 1982) and several of the artist’s collaborations with Andy Warhol, including some works never before presented together in Europe.

Other key pieces include “Obnoxious Liberals” (1982), coming from the Broad Art Foundation, “In Italian” (1983), from the Brant Foundation, and “Riding with Death” (1988), as well as rarely-seen paintings including “Offensive Orange” and “Un-titled (Yellow Tar and Feathers)” both from 1982.

The exhibition runs from Oct. 3, 2018 through Jan. 14, 2019 and will be presented alongside a show devoted to Austrian expressionist Egon Schiele, a juxtaposition meant to highlight the “existential nature” of both artists’ work, according to the museum.

As Paris gears up for its Basquiat show, London will soon bid farewell to the exhibition “Basquiat: Boom For Real” at the Barbican Centre. The show focuses on the artist’s relationship to music, writing, performance, film and television, placing his work within the wider cultural context of the time through a display of paintings, drawings, notebooks and objects, presented alongside rare film, photography, music and archival material.

The first posthumous survey of the artist’s work in the United Kingdom, and the first major U.K. presentation of his work in more than 20 years, “Boom For Real” runs through Jan. 28, 2018, before moving on to Schirn Kunsthalle Frankfurt, where it will be open from Feb. 16 to May 27, 2018. JB