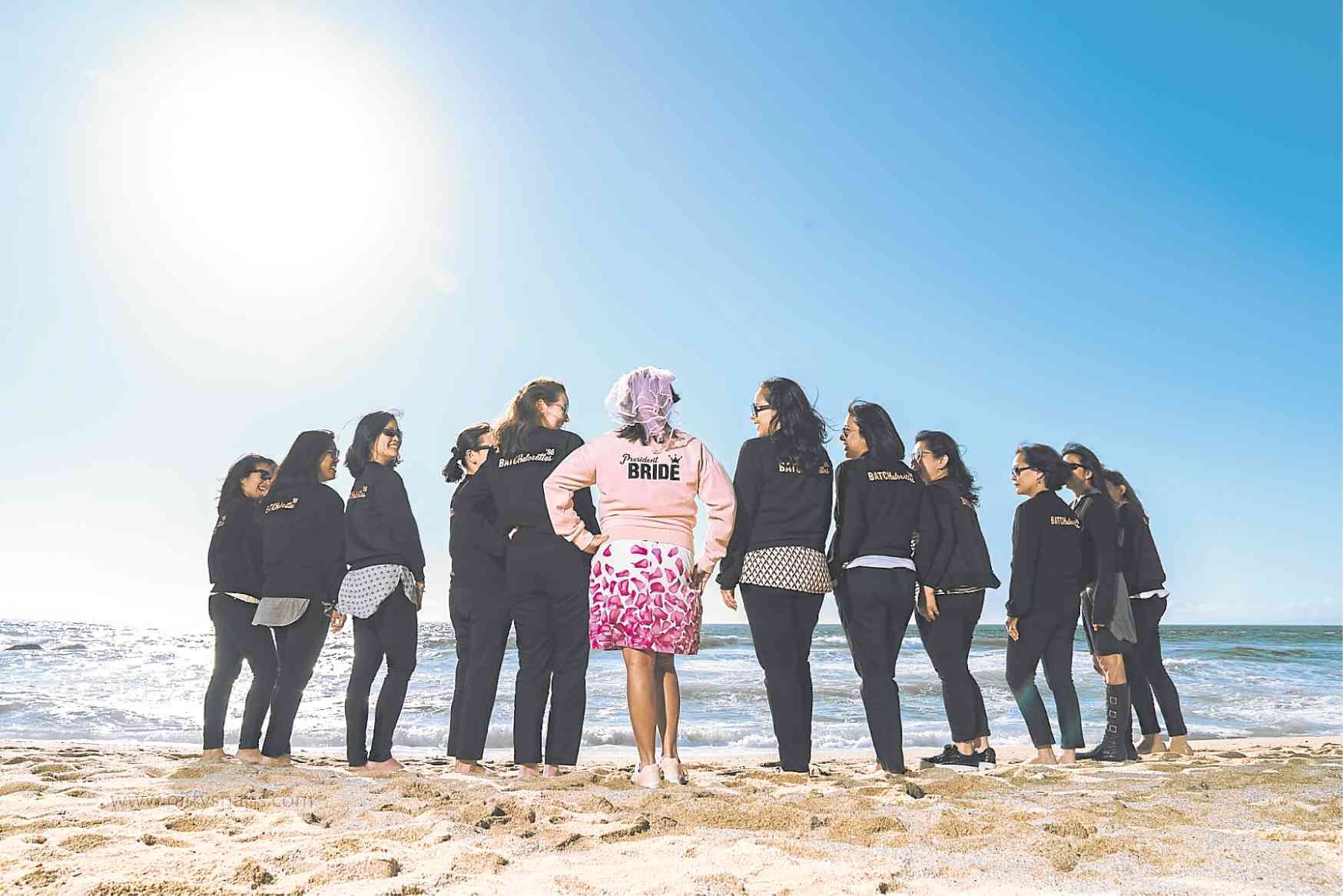 A shower of bridal showers for Malu Gamboa

A romance that blossomed in midlife led to 13 bridal showers, an intimate wedding and a reception for foodies.

Friends of restaurateur Ma. Lourdes Gamboa will have to get used to her new name, Malu Lindo. At 48, she tied the knot with photographer Ramon Martin “Mon” Lindo, 53.

Malu recalls that she met Mon 21 years ago, at the first anniversary of Cirkulo in 1995. The Spanish restaurant is one of four brands of the Gamboas’ Milky Way Group of Companies, of which she is general manager. “We were acquaintances who never looked at each other twice,” she said.

In 2011, Malu’s high school batch 1986 was celebrating its silver anniversary at the annual Assumption Old Girls’ Day. As the batch president, Malu met up with Mon who was tasked to photograph the event.

After the event, Mon often spotted Malu at the Azuthai booth at Salcedo Saturday Market where they engaged in small talk. Since Mon knew that Malu was interested in the arts, he invited her to an art event, followed by another. He then asked her out to a movie, until they started dating more often.

“I liked his skill set—he is a photographer, DJ and painter. They were different from my skills, which are business related,” she said.

Moreover, both their families come from Pampanga. When Malu met up with the Lindos, she understood their conversation in Kampampangan.

It was Mon’s innate goodness, however, that Malu said sealed everything.

On Feb. 12, Malu and Mon had just finished their exercise routine of walking around the village. When they reached Malu’s house at 11 p.m., her close friend, Senator Grace Poe, rang her up and spoke to her for 45 minutes. She took a shower to freshen up.

At 1 a.m., Mon put the engagement ring on her finger. Malu shrieked.

“Will you marry me?” he asked sheepishly.

“Do we have to do it right away?” Malu replied.

The couple broke the news to friends and family before Malu’s birthday in March. Malu, Senator Poe and her husband Neil Llamanzares spoke with Mon’s family.

The months since were a whirlwind of bridal showers. In San Francisco, six Assumption alumnae living in North America and six classmates, who were traveling to the United States, gathered in June. Malu’s best friend, Leica Rufino Carpo-Argosino, was the 13th.

Clad in black-and-white bomber jackets, the group reunited at Hyatt Union Square, where Malu was billeted. She was gifted a pink bomber jacket with “president bride” emblazoned on the back as homage to their batch prexy.

A week later, Malu and two friends flew to Los Angeles to meet five other US-based Assumption batchmates. The shower was enlivened with naughty gifts such as edible underwear.

Back home, the couples’ shower, 10 pairs including Mon and Malu, was held at a penthouse condominium in Ortigas. The most raunchy shower was organized by Malu’s gang from Ateneo. At a Makati condo, a handsome Caucasian who claimed to be the building administrator was about to admonish them for their noise. As the music played, he began undressing.

“We shocked the stripper. Here were these middle-aged women jumping on him. There was zero inhibition,” said Malu.

During the habagat month of August, Malu’s team from the Manila Golf Club flew to Boracay and gathered at the tree house, owned by Karen Chiang’s father, McDonald’s chair George Yang.

In September, Team Grace Poe—nonAssumption friends who supported the senator in her presidential bid—planned an action-packed itinerary in Bangkok.

In Bali, 10 childhood girlfriends, including designers Rajo Laurel and Nix Alañon, partied at Potato Head, the commune of bars and dining places, and shopped in Ubud.

Again, the Manila Golf Ladies hosted an inspirational party at the house of Lorna Tabuena, president of the ladies’ branch. Malu was given advice by women who had been married from five to 60 years.

under Wawa Feliciano celebrated over lunch, tapas and cava at Txanton. An Austrian wine expert waltzed with Malu. “We were like cougars with this young sommelier,” she said.

Families had their own theme. Wedding sponsor and Inquirer president Sandy Prieto-Romualdez hosted a shower in her residence with the Rufino clan, which included the Laurels and the Roxases. Malu and Mon were gifted with travel-related accessories.

On a Sunday family lunch at the Gamboa residence, Malu wondered why her brother walked in with a stool as a present. After the meal, the shower turned out to have a Kalinisan or Cleanliness theme. All the members gave her appliances and cleaning aids, with a note “Maglaba ka araw-araw (do the laundry every day)” and “Maglinis ka araw-araw” (do housekeeping every day).”

While most of the parties were casual, former classmates hosted a high tea party—with steak—for “Lady Malu” in a house at Verdana Homes near Alabang.

The last hurrah was a Poblacion crawl hosted by close friends from Ateneo, led by Boompy Martel.

The despedida de soltera was held where Mon and Malu first met, at Cirkulo. Over 70 friends and family members enjoyed the restaurant’s classics such as slow-roasted beef belly and sisig. A video that captured the 13 showers was shown.

On Oct. 30, Malu finally walked down the aisle in a haltered gown and cape in Parisian guipure lace at Santuario de San Antonio, which was close to her mother’s crypt. The entourage wore various shades of blue, her favorite color.

The team behind the wedding were close friends—Chan organized the choir for the Mass and hired the band True Faith for the reception. Architect Tina Bonoan, design consultants Anton Barretto and Judith Berenguer-Testa styled the event.

She chose the Manila Polo Club for the venue since she practically grew up in the place. Her brother, chef J Gamboa, got maestro cortador (professional master jamon carver) Michael Lopez Teves to slice premium ham. Cirkulo brought in the cochinillo, paella montaña and roast beef. Costa Brava laid out a fancy dessert buffet.

After the wedding, the couple and 25 friends had a “buddy-moon” in Pangulasian, El Nido.

On married life, Malu declared, “It’s nice to do things with someone, yet even doing nothing with Mon is a happy feeling.” —CONTRIBUTED