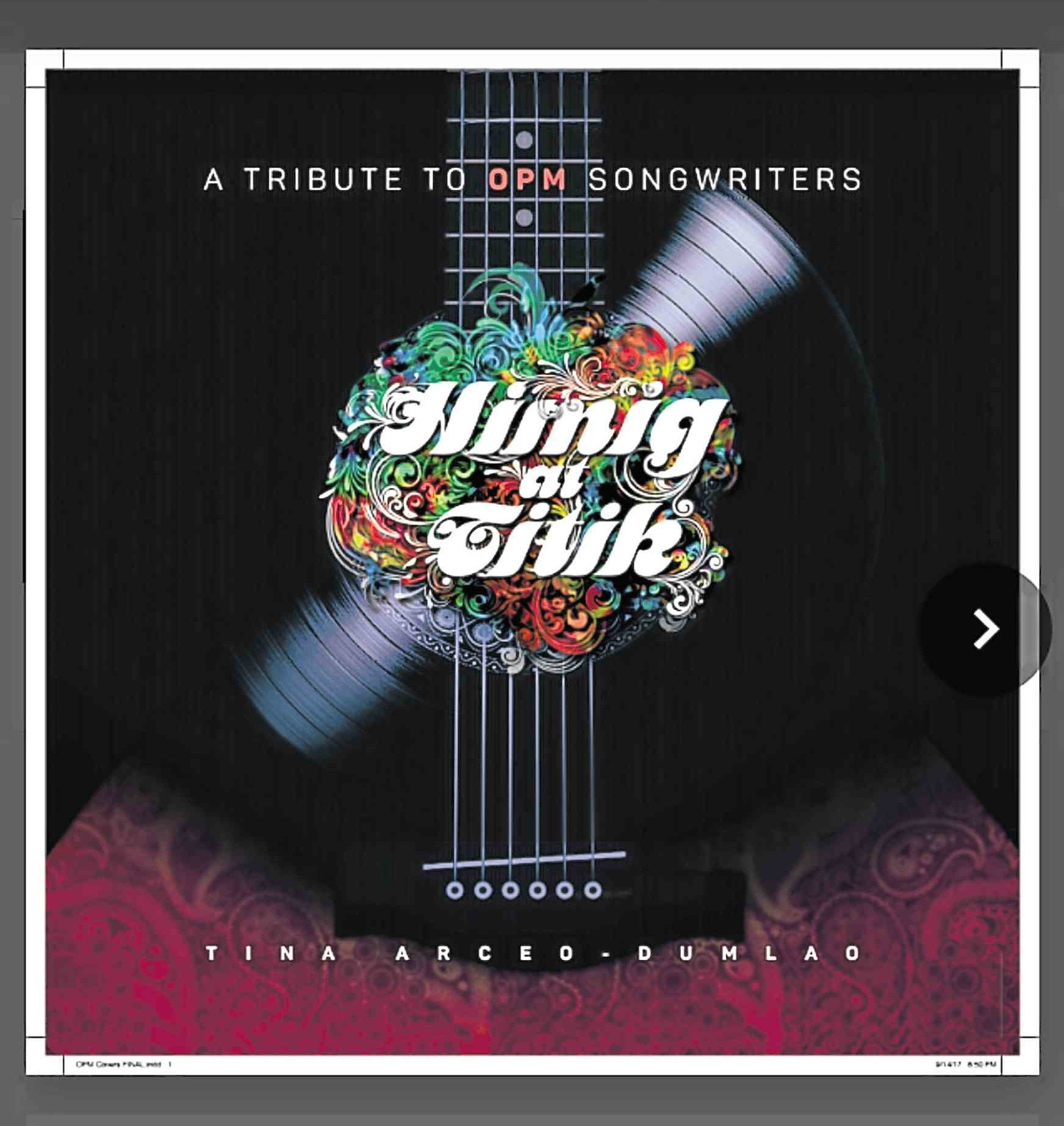 Stories behind the songs Was it sheer coincidence that OPM, or Original Pilipino Music, was born in 1972, the year then President Ferdinand Marcos declared martial law? Or was it a natural consequence that the most talented Filipino songwriters created their best work during a dark period in the country’s history?

The term “OPM” itself was said to have been coined by Apo Hiking Society’s Danny Javier, then a marketing executive at Jem Records, to draw the attention of the colonially minded record-buying market.

In any case, reading the book “Himig at Titik: A Tribute to OPM Songwriters” is an exhilarating journey back to the ’70s and ’80s, two crucial decades that saw a golden age in contemporary Filipino music, when local musicians and composers found artistic freedom and commercial success through a confluence of events.

Written by Tina Arceo-Dumlao, an avid music fan with a day job as editor in the Inquirer’s Business Features section, “Himig at Titik” explores the wonderful explosion of various musical genres that branched out of OPM’s roots—the songwriters themselves talking about their process of creating, as the book’s title says, the music and lyrics to their songs.

It’s the first of its kind. Before “Himig at Titik,” there was nothing out there, except Jingle Chordbook, the magazine that chronicled contemporary music, including OPM, and which likewise flourished in the ’70s and ’80s.

“Himig at Titik” is divided into nine chapters, including the genres that defined Pinoy music at the time (Manila Sound, Pinoy rock/folk/jazz), the most prominent composers/arrangers, Metropop alumni, English OPM and sociopolitical songs.

Consisting of interviews with the artists which Dumlao herself conducted, the book is a treasure trove of the stories behind the songs.

For instance, Juan dela Cruz (JDLC) Band’s Joey “Pepe” Smith—who in 1972 wrote “Himig Natin,” virtually the opening soundtrack of OPM—recalls how he penned another of the band’s Pinoy rock classics, “Beep Beep”: “Naisip ko ’yung mga driver ng jeep, ’yung buhay nila. It took me about two days to write that song. The lyrics came first, the chords later. For other songs, the chords came first. And in others, sabay dumarating.”

Another member of the JDLC triumvirate, Wally Gonzalez, acknowledges the efforts that Dodie Gonzalez, his brother and then JDLC manager, in independent record promotion, buying airtime in radio station DZRJ: “Binili namin every Wednesday from 10 to 11 p.m., for two months, puro lang kanta ng Juan dela Cruz ang pinapatugtog. It was not really expensive at that time, and also because we were able to get sponsors like Butterfly Iced Tea.”

Hotdog’s Dennis Garcia recounts the circumstances that led to the birth of a new local pop genre, during a meeting with Vicor Records boss Vic del Rosario: “Over the course of the sumptuous meal, I mentioned that Hotdog should have a differentiator, not unlike how Motown was propagating the ‘Sound of Young America.’ Vic agreed. And while biting into my juicy schublig, I hollered, ‘Manila Sound!’”

Sampaguita gives a hint on her relationship with Gary Perez on their collaborative masterpiece, “Tao”: “This song was my answer to Gary’s question when he was making his move to be my friend.”

Dumlao writes that Sampaguita describes Perez “as a makata or poet who writes about love, heartache and pain. She, on the other hand, likes writing about hope and philosophical messages.”

Dumlao notes that “Cayabyab’s album ‘Roots to Routes,’ also known as ‘Pinoy Jazz II,’ was a nod to the influence of Munji, who died in 2012 at age 57.”

An amusing anecdote is the mention of filmmaker Mike de Leon as the inspiration for Danny Javier—who was then in the cast of De Leon’s film, “Kung Mangarap Ka’t Magising,” that was being shot in Baguio—to write “Pumapatak Ang Ulan”: “He was infamous for losing it when it rains… So pag umuulan na, lalapit ako sa kanya at kakantahin ko… Siyang-siya ’yun.”

Javier’s Apo cohort, Jim Paredes, on “Batang Bata Ka Pa”: “I wrote that when my daughter Erica was born. I remember I didn’t want to touch her, I didn’t want to carry her because I was scared. When my wife finally came home, she put her in my arms… It was a very stirring moment. The whole instinct of fatherhood and protectiveness came rushing. I wrote the song in 30 minutes.”

In the book’s very last article is Gary Granada, perhaps the country’s most vital songwriter, talking about the higher aspirations of music: “I have always believed that music should not stand alone. Rather, they should be part of a broader agenda that involves other people. It should not be self-indulgent, dapat nakakabit sa isang mas malaking diskurso.”

As a whole, “Himig at Titik” is a resounding recognition of a high point in modern Filipino music that may inspire the younger generation of songwriters and fans alike.