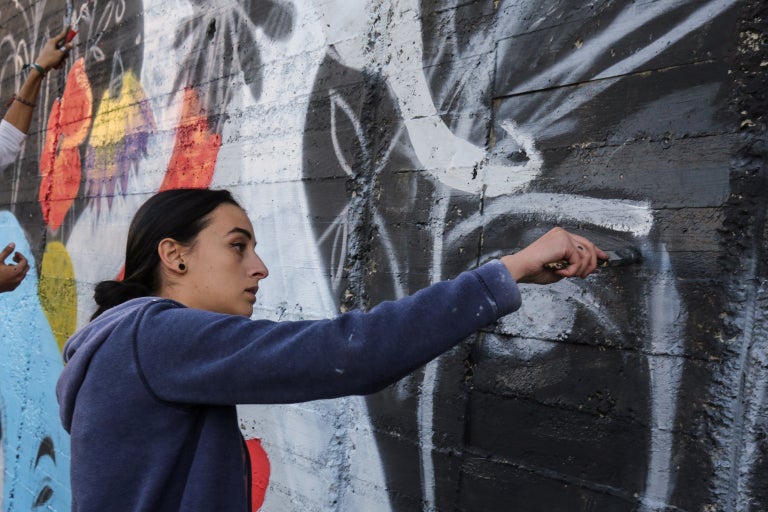 Dreadlocked university student Suhaib Attar clutches a can of spray paint as he sets to work on the latest gloomy corner of Jordan’s capital that he has turned into his canvas.

The leading light of a tiny group of graffiti artists, the 25-year-old is on a mission: daubing flowers, faces and patterns across Amman to bring more colour to the lives of its four million inhabitants.

“Our city is beautiful but it needs to be brightened up,” Attar tells AFP. The aim is to “transform these great big walls of dull concrete into an expressive painting that is full of life,” he says.

Built on seven hills that give their names to the main districts, Amman has been home to a small graffiti community for some years. And while they may number fewer than 10, the artists have been busy.

Their eye-catching designs have begun popping up around the city center, especially the oldest Jabal Amman and Jabal al Lweibdeh neighborhoods where lots of foreigners live.

In a conservative society like Jordan’s the graffiti artists have constantly had to challenge convention to carve out a niche for their works. But the art still faces limits like other forms of expression, and Attar says he steers away from politics and religion.

“I avoid topics that may shock some people who do not understand this art yet,” the street artist explains.

“I was doing a large portrait of a tribal man and passers-by started questioning me, lecturing to me because I was up a ladder among a group of men,” she recounts. “They interrogated me about the meaning of my graffiti.”

Sultan says that as she walks around Amman she itches to use her skills to revitalise the many soulless expanses of wall she sees.

“But it isn’t so simple as to do the graffiti we need to get prior permission from the municipal authorities or the owner of the building,” she explains. “Most of the time we end up getting refused and sometimes we face rejection by members of society.”

Painter Wissam Shadid, 42, agrees that there are “red lines” that cannot be crossed in a society steeped in tradition where artistic creation can be curbed.

“We paint nature, animals, portraits, but we don’t touch at all subject connected to morality,” the street artist says. But even that makes for an impressive change around the Jordanian capital.

“Before there were only the names of football clubs, phone numbers or messages from young guys to their friends scrawled on walls,” Shadid says. “Now we are trying to make our art more popular.”

And as graffiti makes inroads in Jordan it is increasingly drawing admiration from some locals and visitors.

“It adds color to the city as buildings here can all look alike,” says Phoebe Carter, an American studying Arabic in the kingdom.

Jordanian Karim Saqr, 22, agrees that the works bring a much-needed splash of excitement: “When I spend the morning near a wall with beautiful graffiti, it fills me with positive energy for the rest of the day.” JB