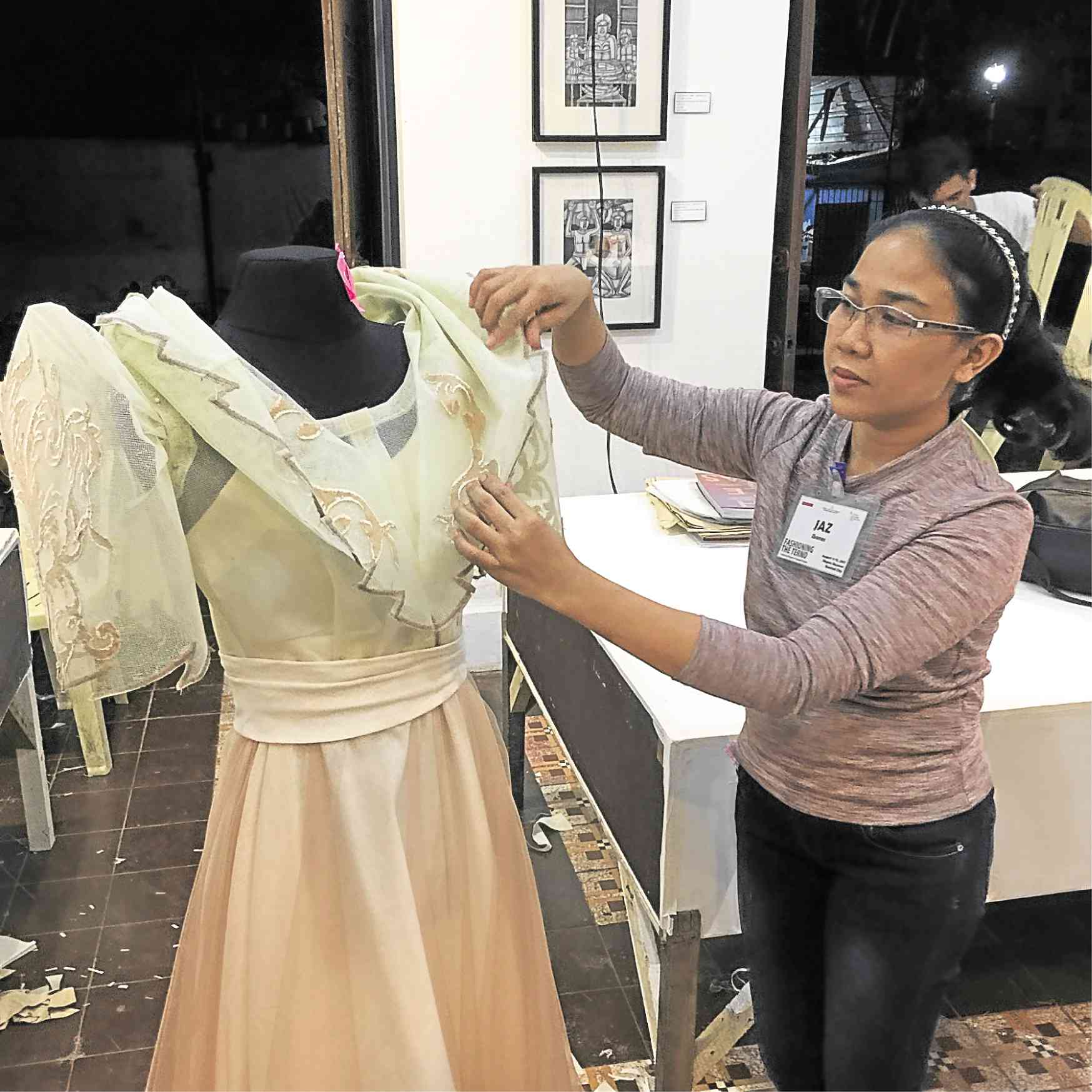 Putting the finishing touches on a toile of a circa 1940s “terno,” based on a pattern from Salvador Production designer Gino Gonzales Bernal’s book “Patterns for the Filipino Dress” —PHOTOS BY GINO GONZALES

Look to the past to observe and hopefully learn how things were done. Only then can you break the codes and innovate. It’s a philosophy that Gino Gonzales strongly believes in.

Three years ago, the multi-awarded scenographer and production designer co-authored with Mark Lewis Higgins the book “Fashionable Filipinas: An Evolution of the Philippine National Dress in Photographs 1860-1960” (Slim’s Legacy Project, Inc. and Suyen Corp., 2015). “We wanted to continue the project by way of exhibits and lectures, but there were no specific plans for a full-blown workshop,” Gonzales told Lifestyle in an exclusive interview.

What started out as several sessions held at the Ateneo de Manila University evolved organically into jam-packed three-day workshops held last year in Vigan in Luzon, Bacolod in the Visayas, and General Santos (GenSan) in Mindanao.

“When we came up with the book, we wanted it to be used to educate,” said Gonzales. “We realized it wouldn’t be enough to address our concerns, mainly the bad proportions of the terno that are so common today.”

He lamented the lack of knowledge of some designers, not just in the construction but also in the history of the national dress.

“They don’t know why things came about, that’s why they make design decisions that are not informed,” Gonzales pointed out. “They think they’re being innovative but by not knowing the history, the tendency of some designers is to create corrupted versions.”

He recounted how the initial classes at Ateneo made him realize that they could be effective tools in addressing the issues. There was a course outline which had to be modified.

They applied for a grant from Suyen and were given the funds to purchase sewing machines, dress forms, projectors and flight cases so everything could travel as a unit.

“We also had to get the cooperation of the Cultural Center of the Philippines (CCP) as well as local government units in Luzon, Visayas and Mindanao, since they were the ones with the onsite knowledge, such as who to tap and where to conduct the workshops,” Gonzales said.

There were 15 participants for each workshop, an intensive three days starting early in the morning and lasting till 10 or 11 p.m.

Days 1 and 2 involved individual assignments while the last day, Day 3, was for a group exercise.

“The first pattern that they had to build was the pagoda, or bell sleeve, which is relatively easy. It served as a warm-up exercise for those who hadn’t sewn in a long time,” Gonzales said.

The next day was for making the terno’s butterfly sleeves made with cañamazo, a starched, open weave fabric similar to sinamay. The designers had to build the bodice using traditional techniques from the 1930s.

To get the perfectly rounded shape, each butterfly sleeve requires eight to 12 pleats. Easing under the arm is also essential to facilitate movement and allow the sleeve girth to fit the armhole of the bodice.

“Some of the established designers didn’t realize the workshop would be that intense. They had been so used to having their sewers and cutters build for them that it was the first time they handled clothes again,” Gonzales recounted.

“One of them said that when he goes home, he will have to be nicer to his manang (female sewers and cutters).”

On the last day of the workshop, the participants were grouped into threes, and tasked to build a randomly chosen pattern from Salvador “Badong” Bernal and Georgina Encanto’s book “Patterns for the Filipino Dress” (CCP, 1992).

“By the second day, we had already identified the strong sewers, cutters and leaders in the class, so we were able to group them. Each group had to finish the dress—from scaling and transferring to sewing—in one day,” Gonzales said. “Hindi mo sila makakausap.”

The experience has been a revelation so far. All of the participants, save for a few, shared the same strong work ethic, refusing to yield until they got it right.

“In all the places we visited, there was always somebody willing to lend their grandmothers’ well-preserved terno for examining,” Gonzales said. “The ones we were able to borrow from Batangas were shot through with gold thread, while the Bacolod pieces had beautiful embroidery. Those from GenSan were simpler, more austere.”

Gonzales recalled how the participants particularly enjoyed examining the specimens after the lectures. “We already had the books but these were flat. It’s different when they’re touching the clothes, examining the seams, the fabrics. I realized it was an exciting segment for them—to be able to actually touch these pieces after going through the lectures.”

Gonzales and his team are scheduled to return to GenSan in March because the supplies didn’t arrive in time for the workshop last December. Nonetheless, they soldiered on.

“We had to figure out ways to make it happen even without the materials,” he said. “Fortunately we had our PowerPoint. We built patterns on the spot, some from memory.”

The team also had to source substitute materials. Instead of cañamazo, they used the closest version available. The participants then had to sew things by hand.

Because of the difficulty involved in learning and creating from scratch, the participants completed the course with a sense of fulfillment.

It’s a feeling Gonzales hopes will push these designers to further hone their talent.

“For you to stylize or redesign something, you first have to understand where it came from,” he said. “Before you do abstract art, you have to know classical art. You have to know how to paint in a classical academic manner before you can abstract something successfully.

“There are people who will disagree, but for me, the best abstract artists are those who can paint in the classical manner, like Ang Kiukok.

“He didn’t go straight to cubism. He knew how to do watercolors in the traditional Chinese manner. He knew how to do portraits. In the same manner, the best contemporary designers have a keen understanding of history, like Karl Lagerfeld.”

Gonzales said that the next phase of their project, still in the planning stages, is a terno competition at the CCP, but with fewer participants—10 from each region, instead of 15. The selection will be based on completed works.