Joanna Ampil, MMFF Best Actress, on playing Candida: ‘I felt this role was beyond me’ | Lifestyle.INQ ❮ ❯ 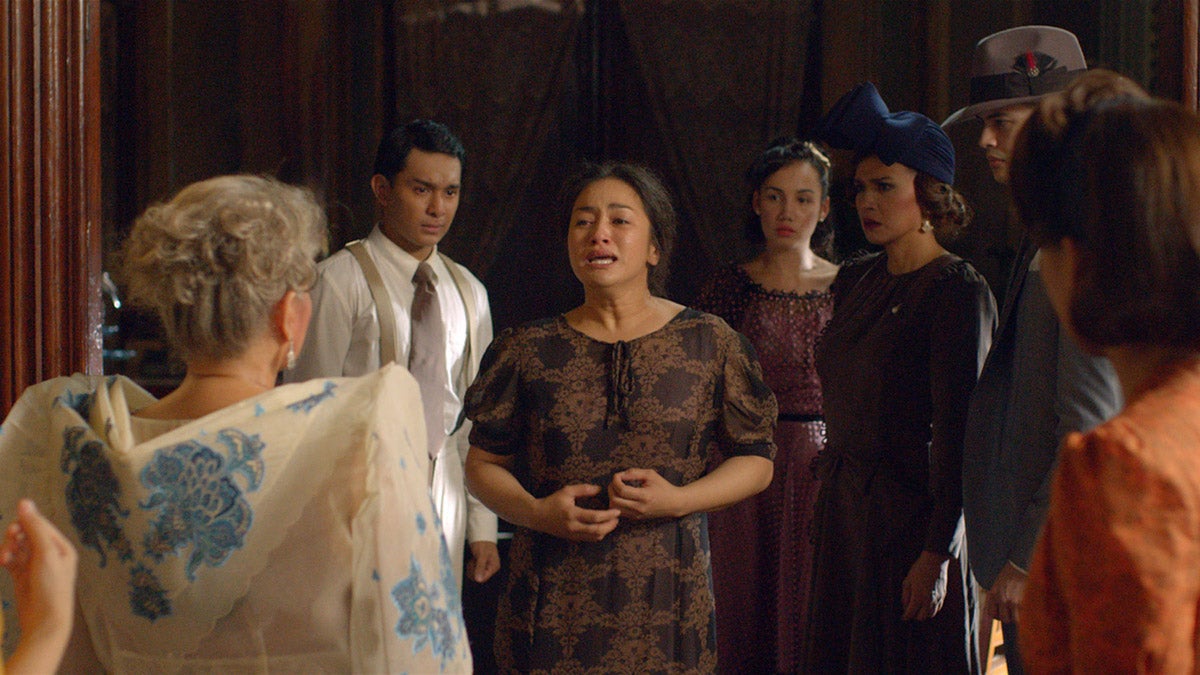 Joanna Ampil (center) as Candida in a pivotal scene in “Ang Larawan,” directed by Loy Arcenas and based on the Rolando Tinio-Ryan Cayabyab musical version of Nick Joaquin’s classic play, “A Portrait of the Artist as Filipino” —PHOTO FROM THE ‘ANG LARAWAN’ WEBSITE

Joanna Ampil, MMFF Best Actress, on playing Candida: ‘I felt this role was beyond me’

Joanna Ampil has starred in some of the biggest and most punishing musicals in the West End like “Miss Saigon,” “Jesus Christ Superstar” and “Les Miserables.” But she is the first to admit that playing Candida Marasigan in “Ang Larawan” proved to be more difficult than she had anticipated.

She even tried quitting twice from the role that would eventually bag her the Best Actress award in the 43rd Metro Manila Film Festival (MMFF).

As early as 2008, producer Girlie Rodis told Ampil about plans to film “Ang Larawan,” based on the musical play that was itself adapted from National Artist Nick Joaquin’s “A Portrait of the Artist as Filipino.” But it was only after four years that Ampil came to know more about Joaquin’s work when she watched the film version of it directed by Lamberto Avellana.

But despite Ampil’s doubts, actress and co-producer Rachel Alejando, who plays Candida’s sister Paula, says there was no doubt in her mind that Ampil was right for Candida, a role that was “not an easy part to sing.”

“You have to have a beautiful voice which [the audience] wouldn’t mind listening to for hours. It’s a difficult role to act. We needed someone very, very experienced and at the right age. [Director] Loy Arcenas was very adamant about that. He would not cast anyone that is not the perfect age for [the role],” says Alejandro, who also played Paula in the 1997 stage run of “Larawan” at the Cultural Center of the Philippines.

Bringing in acting coach Jake Macapagal proved to be a key move. Ampil credits him for helping her “open up.” One of the tips Ampil got from Macapagal was to have a lot of truth and thought behind her eyes. It also helped that when the cast rehearsed “Ang Larawan,” in a venue generously provided free for a year by Regal Films matriarch Lily Monteverde, they did so as if they were in a play.

While her decades-long experience in theater helped her create her Candida character, Ampil says her first foray into film presented a different challenge.

“On stage, there’s a beginning and an end. You can let go [of your character] after doing the show. Here, it’s harder in a way because you have to be constantly focused on your character. But the main thing is, you have to be truthful both on stage and on screen, for the audience watching you.”

Since doing the film required committing to at least a full year of rehearsals before Arcenas started shooting in Taal, Batangas, Ampil says she had to turn down a number of offers abroad to keep her focus on “Ang Larawan.”

But all that effort and sacrifice paid off handsomely; not only did she bring home the MMFF Best Actress trophy, the film also went on to win Best Picture.

The awards came as “Ang Larawan” was sharply losing cinemas to other MMFF entries deemed more commercially viable. From 56 on Christmas Day, the film lost 30 cinemas just a day after and three more on awards night.

But following the movie’s win, it returned to 10 movie houses and added 23 more a day after. It helped that netizens, mostly millennials and young professionals, began raving about the film and helped it trend on social media.

With the success of “Ang Larawan,” Alejandro hopes this would also translate to more support for the country’s theater scene. Rodis says Ampil and Alejandro may reprise their roles in a restaging of “Ang Larawan,” though this may take some time given the logistics—and the fact that the film is only now getting around.

Before the MMFF, “Ang Larawan” had been shown at the Tokyo International Film Festival, where it garnered a rave review from the Hollywood trade magazine Variety.

Locally, the ride has not been as easy, but prospects are looking up day by day, with some 80 cinemas now showing the film. So, while Ampil admits feeling disheartened when she heard news of the film being pulled out of the theaters, she’s still glad that they were able to “create something very special.”

Despite her success abroad—her latest career highlight is playing Grizabella in a global touring production of “Cats”—Ampil remains relatively unknown in the local entertainment scene. But with “Ang Larawan” and her Best Actress win, she’s getting long-overdue recognition—and in a classic Filipino work yet.

“Finally, I have contributed something to the arts in my home country,” she says.