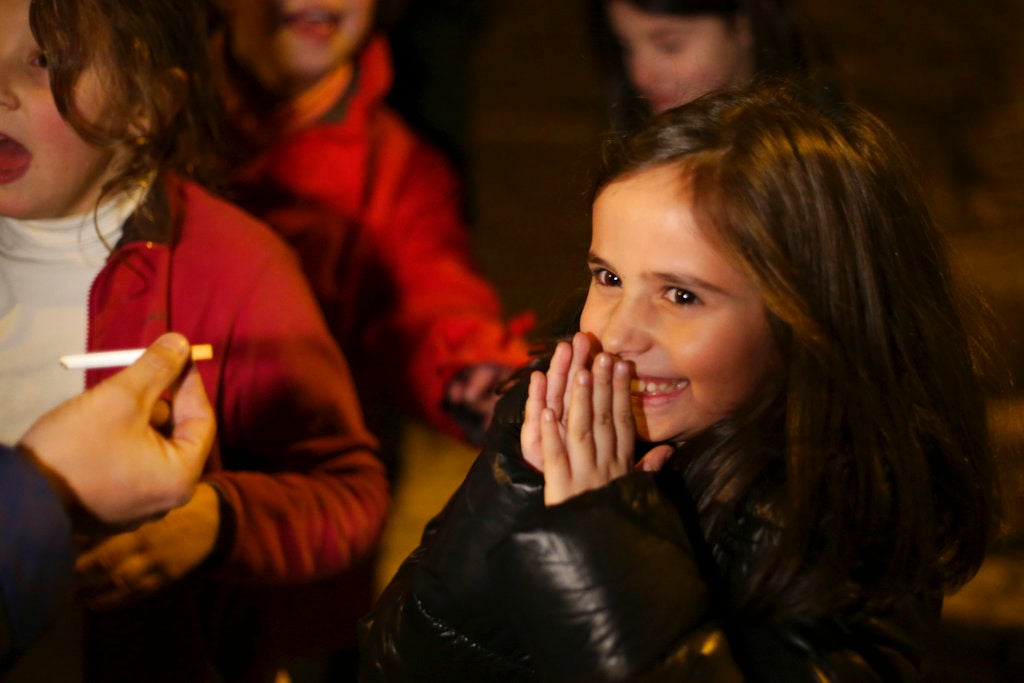 Ines, 8 years old, reacts as her father Frederico hands her her first cigarette, in the village of Vale de Salgueiro, northern Portugal, during the local Kings' Feast Friday, Jan. 5, 2018. The village's Epiphany celebrations, called Kings' Feast, feature a tradition that each year causes an outcry among outsiders: parents encourage their children, some as young as 5, to smoke cigarettes. Parents buy the packs of cigarettes for their children. Locals say the practice is centuries-old, but nobody is sure what it symbolizes nor why the children are incited to smoke. (AP Photo/Armando Franca)

VALE DE SALGUEIRO, Portugal (AP) — The Epiphany celebrations in the Portuguese village of Vale de Salgueiro feature a tradition that each year causes an outcry among outsiders: Parents encouraging their children, some as young as 5, to smoke cigarettes.

Locals say the practice has been passed down for centuries as part of a celebration of life tied to the Christian Epiphany and the winter solstice — but nobody is sure what it symbolizes or exactly why parents buy the packs of cigarettes for their children and encourage them to take part.

The two-day celebrations, which start Friday and end Saturday with a Mass, include dancing around bonfires, a piper playing music and an elected “king” who distributes plentiful wine and snacks.

The legal age to purchase tobacco in Portugal is 18, but nothing prohibits parents from giving kids cigarettes and Portuguese authorities don’t intervene to stop the practice.

Guilhermina Mateus, a 35-year-old coffee shop owner, cites custom as the reason why she gives her daughter cigarettes.

“I can’t explain why. I don’t see any harm in that because they don’t really smoke, they inhale and immediately exhale, of course,” Mateus said Saturday. “And it’s only on these days, today and tomorrow. They never ask for cigarettes again.”

Jose Ribeirinha, a writer who has published a book on the Vale do Salgueiro festivities, said the roots of the tradition are unknown, but may have to do with celebrating the rebirth of nature and human life. He said the village is in a region that adheres to many traditions dating back to pagan times, and that since Roman times, during the winter solstice period villagers here have taken the liberty to do things that would be out of the norm in the rest of the year.

Ribeirinha also believes the relative seclusion of the remote village — 450 kilometers (280 miles) northeast of the capital Lisbon — has helped keep the tradition alive. He said that the surrounding Tras os Montes region “has always been the furthest from Lisbon, the most ‘forgotten one.'”

Portugal, like many other European countries, has taken steps to reduce smoking, including a partial ban on smoking indoors. AB