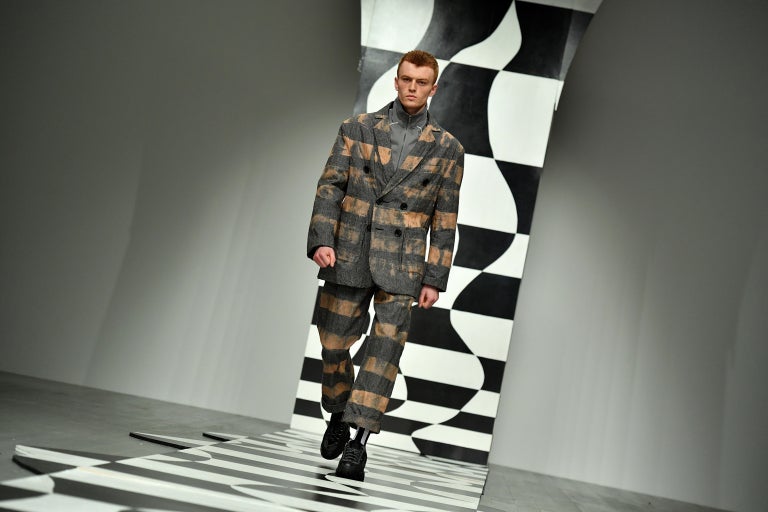 Outerwear and out there: London wraps up men’s fashion week

Gender fluid clothes, dartboards and bright orange; here are some of the trends and highlights from Men’s Fashion Week in London, which wrapped up on Monday:

Organizational reasons kept big names away from this edition — Burberry presents its mixed male/female collection in February — so the men’s event went back to its roots by promoting young designers.

London is the “capital of creativity,” said Caroline Rush, the head of the British Fashion, which organizes the showcase.

One example is MAN, an initiative by retailer Topman and non-profit Fashion East that helps develop new talent. This year, it supported the London debut of gender fluid design duo Art School.

Male and female models wore clothes designed to be worn by either, including a red pinstriped shift dress overlayed with a belted corset, the wearer’s hairy chest showing through.

There is nothing like wearing bright colors on dull winter days, and What We Wear, the label founded by London rapper and singer/songwriter Tinie Tempah, had neon orange scarves, t-shirts and trousers inspired by high-visibility construction wear.

At Christopher Raeburn, which prides itself on sustainable designs, orange was also a dominant theme in a collection that transformed air and sea rescue uniforms into modern streetwear, with long padded jackets, gloves and waterproof boots.

Hussein Chalayan used a palette of brown, yellow and black, while Oliver Spencer, who creates tailored casual chic, used ochre and charcoal grey in his latest collection modeled by a range of ages.

After the carefully-coiffed metrosexual and the bearded lumbersexual, is it time for the urban cowboy?

It’s not impossible, if you believe Astrid Andersen, a young designer who matched sportswear with Stetson hats, electric blue puffas and overclothes with tartan designs.

An outfit resembling two dartboards, one worn on the head, the face a bullseye, and one on the body, over a shimmering, colorful dress with an electrical extension cord for a necklace.

It was the creation of Rottingdean Bazaar, a label by James Theseus Buck and Luke Brooks, two former students from London talent hub Central Saint Martins, who are forging a reputation for provocative style.

Notably absent from this season’s Men’s fashion week in London, the high-priestess of punk chose to display her latest collection through a series of images and videos posted online.

“Don’t Get Killed” had a military theme, with models sporting cartridge belts and khakis and posing on army beds, multicoloured oil drums and military-style bunk beds.

Introducing the beauty stars of 2018