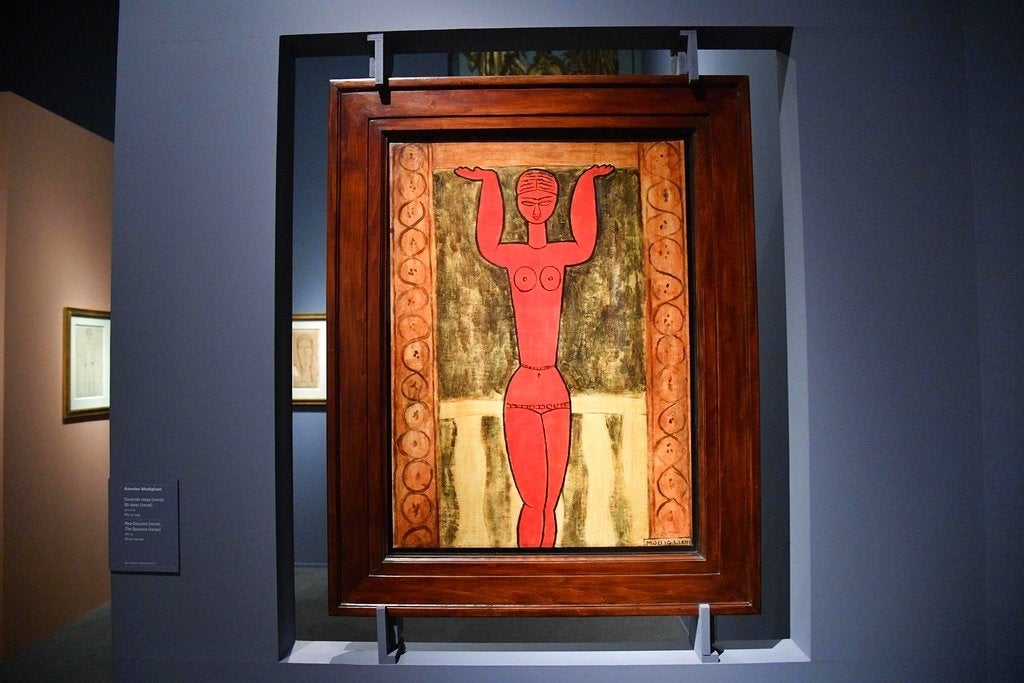 In this photo taken on March 15, 2017, a view of the painting ' Cariatide Rossa ' (Red Caryatid), attributed in a exhibit at the Ducal Palace in Genoa, Italy, to the Italian painter Amedeo Modigliani. Consumer advocates are demanding refunds after an expert ruled that a Genoa exhibit was full of Modigliani fakes. The Italian news agency ANSA reported Tuesday that the expert, appointed by a Genoa court during a prosecutor’s probe, concluded that at least 20 of 21 paintings displayed in 2017 during the Ducal Palace exhibit were clearly fakes. (Luca Zennaro/ANSA via AP)

ROME — Consumer advocates in Italy demanded refunds for ticket-holders on Wednesday after an expert concluded that almost all the paintings in a Genoa exhibition devoted to Italian artist Amedeo Modigliani were fakes.

The expert, appointed by a Genoa court as part of a prosecutor’s probe, determined that at least 20 of the 21 paintings displayed during the 2017 Ducal Palace exhibit were clearly forged, Italian news agency ANSA reported.

The palace closed the show in July, three days before the scheduled end of its four-month run, after prosecutors began investigating the doubts art experts had expressed over the authenticity of the paintings being attributed to Modigliani.

The palace, which had outsourced the show to private organizers, is itself seeking damages for the embarrassment caused by the episode.

Consumer advocate Furio Truzzi urged exhibition-goers on Wednesday to seek refunds based on fraud. His organization set up a hotline for people who bought tickets or traveled to Genoa to see the show.

Noted Italian art collector Carlo Pepi, who was among the critics who questioned the provenance of the works displayed in Genoa, described the paintings as “garbage” in an interview on Italian state TV’s RaiNews24.

Modigliani, the early 20th century artist whose style as a painter and sculptor was distinguished by elongated necks and faces, died in poverty in Paris in 1920.

Modigliani fakes have caused embarrassment before in his native country. Three marble heads fished out of a canal in Leghorn during the 1980s were initially hailed as long-lost Modigliani masterpieces.

Instead, it turned out a trio of local students crafted the sculptures as a prank in 1984.

In closing down the exhibit in July, the Ducal Palace noted that it had outsourced the organization of the show, including the selection of the works to be displayed. The palace said it would “seek legal protection for its rights and public image.”

The owners of the paintings put on display in Genoa were likely to seek a counter-opinion from other experts, since actual works by Modigliani would be worth millions of dollars.

The court-appointed expert, Isabella Quattrocchi, did not immediately respond to a request for comment. Italian news reports said she concluded that, among other details, the pigment on the exhibited paintings was not consistent with the kind Modigliani used.

Milan daily newspaper Corriere della Sera quoted one of the exhibit’s two curators on Wednesday, defending his work and saying that he was not the authenticator of the selected paintings.

“I gathered the information and the documentation that was supplied to me for every canvas,” curator Rudy Chiappini said. “If there have been irregularities, you need to go back to the source, to whoever made the first attribution” that Modigliani created the paintings.

“I, until proof to the contrary, remain of the idea that the artworks are good” ones, the newspaper quoted Chiappini as saying.

On the eve of the show’s March opening, Chiappini told The Associated Press: “Setting up an exhibition of Amedeo Modigliani is always a new adventure.”