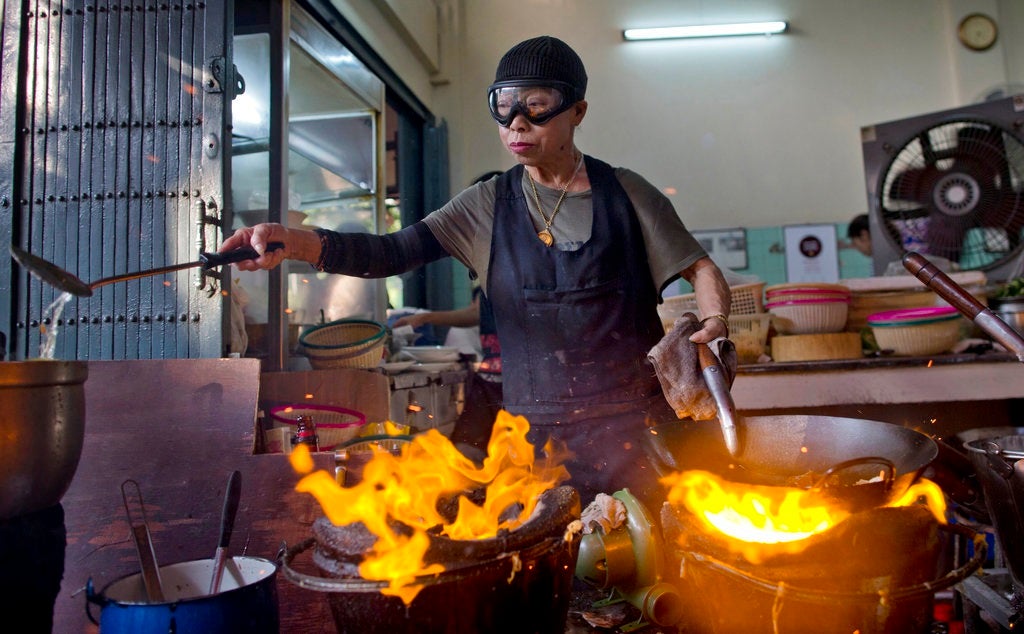 In this Dec. 20, 2017, photo, Thai cook Supinya Jansuta, 72, better known as "Jay Fai," wearing goggles, cooks with two flaming woks at her eatery in Bangkok, Thailand. After spending more than three decades cooking in an unassuming outdoor kitchen, Jay Fay has been propelled to international culinary stardom by having her restaurant awarded a Michelin star.(AP Photo/Gemunu Amarasinghe)

BANGKOK — After spending more than three decades cooking in an unassuming outdoor kitchen, a wok-wielding, goggles-wearing Thai chef has been propelled to international culinary stardom by having her restaurant awarded a Michelin star.

Supinya Jansuta, better known as “Jay Fai,” is among 17 Bangkok-based chefs whose venues received the coveted honor from Michelin in a guidebook released last month — its first foray into the country.

Jay Fai, as her restaurant is also known, is often featured in foreign travel guides but is mostly shunned by Thais for its high prices of what is generally considered cheap local food.

But a closer examination of the 72-year-old chef’s dishes reveals an abundance of fresh seafood and prime ingredients.

“This is an old classic hole-in-the wall place which charges 800-1,000 baht ($24-31) for its famous crab omelet, which is nowhere near street-food prices. But when you cut that thing open, it’s literally bursting with the freshest crab in the whole city,” Irvine noted.

Jay Fai is the only restaurant in the Bangkok guide listed under the “street food” classification to receive a star.

“Jay Fai is a place that both taxi drivers and foodies wax lyrical about and it’s easy to see why,” the Michelin guidebook said of the restaurant.

Bangkok is renowned for its street food, with cart-wielding vendors selling everything from Thailand’s signature noodles to spicy tom yum goong soup.

The stalls, with their metal folding tables and rickety plastic stools, serve as a gastronomic go-to for budget-conscious locals and adventurous tourists alike.

In recent months, however, officials in the military-ruled country who see street food as an illegal nuisance have warned hawkers to clear out of some of the city’s neighborhoods.

While Jay Fai is one of 14 Bangkok restaurants to receive a single star, none got three stars, the highest Michelin honor. Three were awarded two stars — the Indian restaurant Gaggan, French venue Le Normandie, and European establishment Mezzaluna.

Following the lead of several other Asian nations, Thailand’s government earmarked $4.1 million in 2017 to commission five years of Michelin Guides dedicated to the country.

Michelin said the Bangkok guide was “solely, independently and anonymously” produced by its team of critics.

Jay Fai said she was happy about receiving the Michelin honor, but questioned why it came so late in her career.

“I’ve been cooking for 30 to 40 years, so I don’t know why I’ve only just got it,” she said. “I’m happy that they’re starting to recognize Thailand and Thai chefs.”

“I hope more Thai people will win the award next year, and they don’t just give it to Jay Fai again,” she also said as she expertly flipped and tossed vegetables in a flaming wok.

Since receiving the accolade, Jay Fai’s once relatively quiet restaurant has been busier than ever. Her shop is open from 3 p.m. to 2 a.m., but many people start queuing up well before opening time. By afternoon on most days, a “full house” sign is hung up, indicating that no further customers can be accommodated.

After waiting in line for over two hours, David Goldman, a tourist from Los Angeles, left the restaurant satisfied.