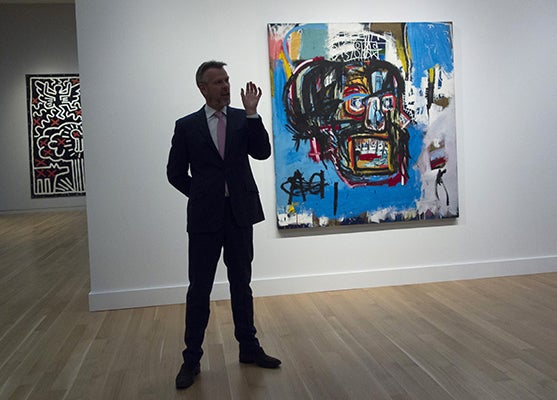 A Sotheby's official speaking about an untitled painting by Jean-Michel Basquiat during a media preview in May 2017. Image: AFP/Don Emmert

A Basquiat masterpiece, bought by a Japanese billionaire for a record $110.5 million, will make its museum debut this month, going on display in the artist’s home borough of Brooklyn.

Jean-Michel Basquiat’s 1982 “Untitled” has been virtually unseen in public and never previously been exhibited in a museum. It depicts a skull-like head in oil-stick, acrylic and spray paint, and was bought at Sotheby’s last May by Yusaku Maezawa.

The $110.5 million price tag set a new auction record for Basquiat and a record for the work of any United States artist at auction.

“My wish to share this masterpiece with as many people as possible begins in Basquiat’s home town of Brooklyn,” Maezawa wrote on his Instagram account Thursday.

Basquiat was born in Brooklyn to Haitian and Puerto Rican parents. He died 30 years ago, in 1988, of an overdose aged just 27 after a fleeting eight-year career.

He enjoys a stratospheric following, his work snapped up by celebrities such as Leonardo DiCaprio and Jay-Z, but experts say his legacy has been largely confined to popular culture while museums have been accused of downplaying his stature.

The subject of much of Basquiat’s work, ordeals endured by blacks in America, has found renewed resonance in the wake of nationwide United States protests since 2014 about the shootings of unarmed black men by police.

The Brooklyn Museum said “Untitled” would be on view from January 26 to March 11. It will then go on a world tour, before being housed eventually in a museum that Maezawa is building in his home town of Chiba, Japan, the museum added.

“I am thrilled to be sending Basquiat’s masterpiece home to Brooklyn,” said the 42-year-old Japanese entrepreneur in a statement released by the museum.

“It is my hope that through the exhibition and extensive programming accompanying it, the young people of the borough will be inspired by their local hero, just as he has inspired so many of us around the world.”

An aspiring rock star as a teen, Maezawa founded Start Today in 1998, which operates Japan’s largest online fashion mall, ZOZOTOWN. Today, he is the 14th richest person in Japan with a fortune of $3 billion, according to Forbes.