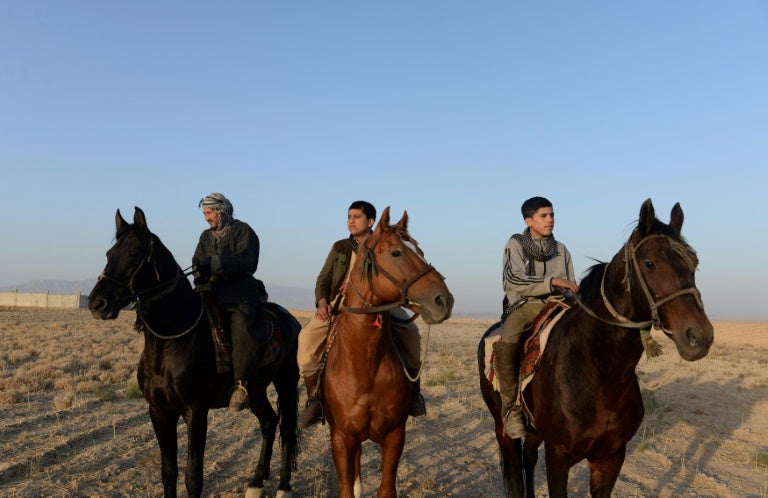 The rugged men of northern Afghanistan raise their buzkashi horses to be warrior princes, ready for the savagery of polo with a headless carcass © FARSHAD USYAN - AFP

The rugged men of northern Afghanistan raise their buzkashi horses to be warrior princes, ready for the savagery of polo with a headless carcass.

Mounts, like their riders, must be brave, strong and fast to compete in the traditional sport of buzkashi, which means “dragging the goat” in Persian.

The game involves ripping a 50-kilogram carcass from the fray of horses and dropping it in the “circle of justice” traced on the ground in lime — after doing a lap of the field at a full gallop.

“Only one horse in a hundred stands a chance in buzkashi,” says Haji Mohammad Sharif Salahi, the president of the buzkashi federation in Balkh province, whose family has owned horses for 100 years.

“The stallions of General Dostum cost up to $70,000. Some of Marshal Fahim’s reach $100,000,” he says, referring to the Uzbek warlord living in exile in Turkey and the late Afghan vice president Mohammad Qasim Fahim.

“Everything depends on their strength and their resilience,” says Salahi, wearing a tawny karakul hat, as he rubs a ruby-ringed hand on the neck of an enormous chestnut measuring more than 18 hands (1.85 meters).

“They are trained to respect and behave calmly, but if you let go, this one eats the others.” Balkh has more than 150 buzkashi horse owners, some with more than 400 steeds. Dedicated events draw 500 horses but that figure can go up to 2,000 if it is a wedding celebration.

While buzkashi is the pride of the north, the game also has a strong following in Kabul, with weekly matches during the season drawing hundreds of spectators.

Whether their value is real or fantasy, the steep price for a buzkashi horse translates into respect for the owner because it symbolizes wealth and power.

“All rich men must have a stable and riders,” says Haji Rais Moqim, as he sits astride a massive horse measuring 19 hands (1.90 meters).

The businessman, who is based in the provincial capital Mazar-i-Sharif and likes to listen to popular buzkashi tunes in his 4X4 vehicle, has 22 horses like his father before him. At dawn he rides with his team of “sais” — grooms — to exercise the steeds, stirring up clouds of dust in the morning light.

“A horse is a member of the family. It is raised like a child at school. We care for it like a human,” the 52-year-old says.

Every horse has its own trainer who works with them daily and forms an intimate bond with them. “Our horses come from Uzbekistan. It takes years to train them.

They are ready around the age of seven and compete for 20 years or more,” says Mohammad Mousa, who has worked as a groom for Rais Moqim for 18 years. His boss has warned Mousa that he will let him go only when the stallion he is in charge of dies.

As the season approaches — starting in November or December and finishing at the end of March — the horses are forced to adopt a strict diet.

After being rested and fattened to reach their maximum weight over the summer, the horses are made to “qantar,”  or fast, so they lose fat and regain their fighting fitness.

In the autumn, two months before the start of the season, the grooms begin exercising their steeds for up to four hours at a time to strengthen their muscles, says Amir Khan, a groom for Salahi. “After coming back I leave them for an hour on an empty stomach and then I serve them seven kilograms of barley, 10 beaten eggs with a glass of sesame oil and bananas and then the same again in the evening. We feed them well, they need energy for the buzkashi.”

The horses are brushed daily and showered every other day. “Every breeder has his recipes and superstitions,” says French horseman Louis Meunier, who rode for a buzkashi team in Kabul from 2007 to 2009 while working for an NGO in the Afghan capital.

“Beliefs vary from one valley to another: here the chestnut is considered the most intelligent, there the black for being the fastest,” says Meunier from Jordan where he now lives. But he is dismayed at the new taste for huge horses, describing them as “beasts of war”. He warns: The horse (is) becoming an object of speculation, a political tool to show strength.” Khan agrees. “These horses are demons, we know them, we are constantly in danger,” he adds.

But 82-year-old Habibullah, a Kabul buzkashi rider wearing a sheepskin hat, sticks to his little grey nag and dismisses the beliefs about the ideal steed. He explains: “I do not care whether it’s black or white, a horse must first have courage.” MKH