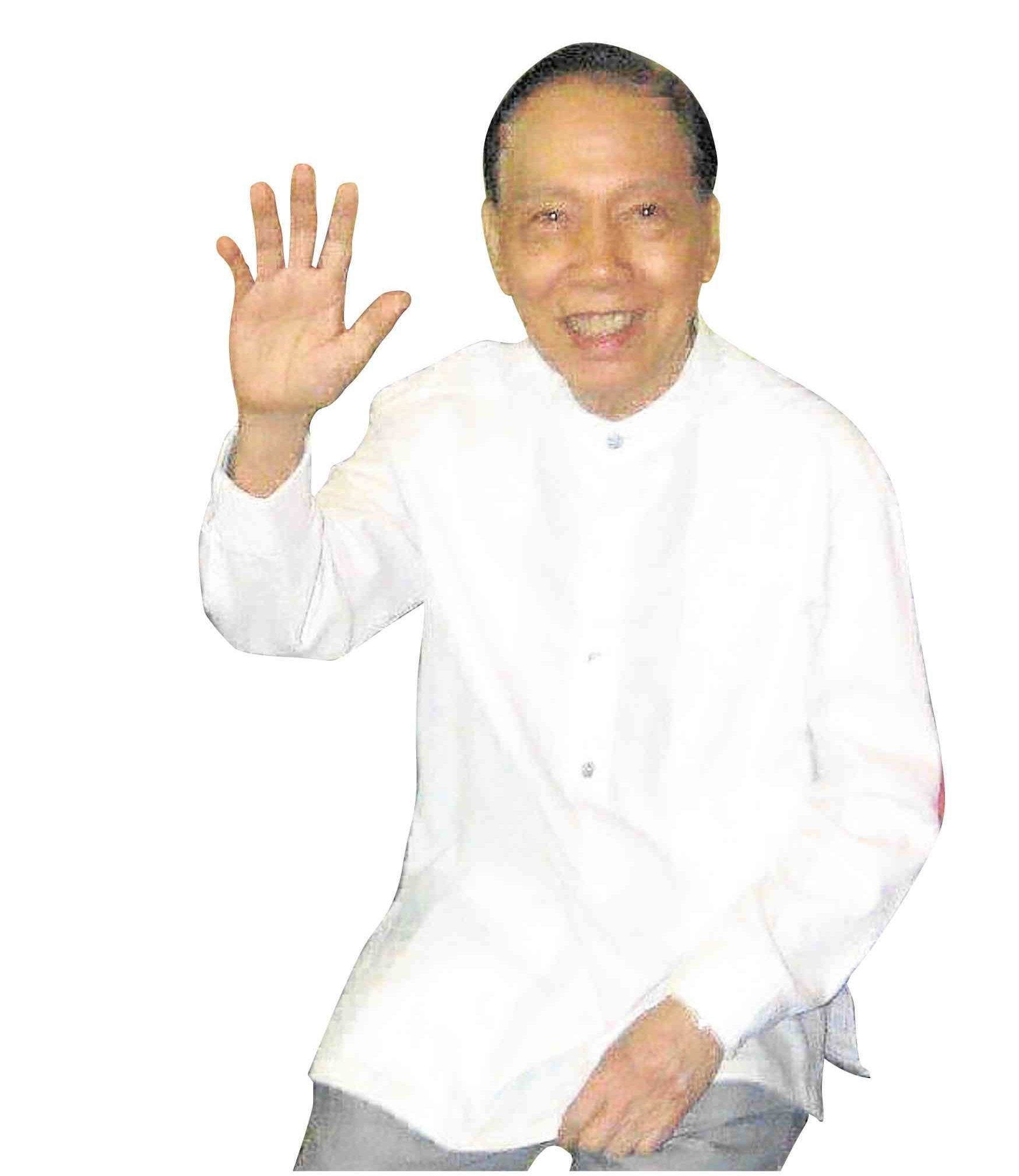 My private time with Pitoy Moreno

One of the things I looked forward to when I returned to work in Inquirer in 2008, after leaving ABS-CBN Publishing, was that, at last, I could again see  Pitoy Moreno for lunch in his landmark of an atelier/residence on Malvar Street in Manila, just like in the late ’70s, ’80s, ’90s, when our office was in Port Area.

Having lunch with Pitoy Moreno was like a rite of passage for a lifestyle journalist (or society editor, in the pre-martial law press), and an experience for the who’s who in society.

Presidents, first ladies, beauty queens, captains of business and industry, showbiz celebrities, socialites, models (Maurice Arcache modeled for Pitoy when Maurice was among Manila’s most eligible bachelors in the ’60s. Many years later, Hayden Kho modeled for Pitoy when he was still a student. You could say that Hayden’s first social stint was in a Pitoy Moreno show)—Pitoy dressed them all, and usually hosted lunches and merienda in his atelier-home, or they inevitably dropped by for fittings. (I remember bringing the newly appointed presidential spokesperson of then President Macapagal-Arroyo, Rigoberto “Bobi” Tiglao, to one such lunch.)

Claiming that he made every A-lister’s wedding trousseau wouldn’t be an exaggeration. (A few days ago, I learned that not only did he design the wedding gown of retail mover Virgie Ramos, he also was around to help dress her up for her wedding to Ben Ramos of National Book Store.)

There, in an old-world house with an elegant blue awning on the façade, on which was written his name, J. Moreno, visitors walked in and out. Pitoy would welcome them, seated behind his wood table before a Joya mural. On the side were the wood carved bench (an Abueva, I think) and a coffee table displaying an artisanal chess board. Pitoy would sit there with his guests to be served sugar cane juice and chicharon, usually as they waited for lunch to be ready. Even here the kwentuhan was the irresistible aperitif.

When lunch was ready, he would lead guests to the dining room past his living room where a commode was laden with framed photos of Pitoy with royalty (e.g. Britain’s Princess Margaret, Spain’s King Juan Carlos), presidents (of the Philippines and of foreign countries), and other world celebrities, most of them taken during the fashion shows Pitoy held abroad before heads of state.

Then the guests, not more than 10, if I remember right, would be led to their seats at the dining table before an old Anita Magsaysay-Ho. They would be served the signature dishes of Pitoy’s home and those of their Manileño ancestral home, as his sister, the poetess Virgie Moreno, would remind us—kare-kare, adobo, rellenong bangus, among others, and his famous buko salad, which had become his signature Christmas gift to friends.

Although famously sumptuous the fare was, Pitoy’s lunches would be remembered for the vibrant conversations—which one could easily compile into the country’s social history. That was an era when people held conversations at the dining table, not on mobile phones.

At those lunches, one would get the latest goings-on and, more important, the personal histories (including marital histories) of those in the news and in society gossip. It was Pitoy who would give  us the family trees of many people in the news, and would fill us in on insider’s factoids—simply because he knew these people.

Not many knew how much of a collaborator Pitoy had been in our work. Through the years, we used his books of birthdays and death anniversaries, aside from fashion books. In the Manila Chronicle, he was our major source for People Are Talking About, who was patient enough to entertain our calls every Friday night, deadline time. In the Inquirer, he helped us with our Wake-uppers (Thumbs Up/Down).

He loved conceptualizing fashion shoots with us, and gave us access to his enormous fashion and photo archives.

One of the recent phone calls we got from him came sometime in 2010, when he reminded us about a “pictorial” we were supposed to have. In fact, there was nothing planned yet. It was then I realized sadly that his memory was beginning to fail.

When we visited him in the hospital in 2014, when Virgie Moreno organized a get-together of friends to mark his birthday, I held his hand and whispered into his ear to try to get well so we could do a “pictorial!” He pressed my hand, as if to respond, and his eyes opened just a bit, but he couldn’t speak anymore.

He was bedridden as a result of failing health and many complications, and was to stay that way in the hospital for almost five years, until he passed away last Jan. 15, a month short of his 89th or 93rd birthday.

Even his close friends, from Conchitina Bernardo to Johnny Valdes, couldn’t get his age right. But as Johnny said, “We never talked about it. For him age wasn’t really relevant.”

Indeed, it was as if Pitoy couldn’t be bothered with such details as age. He couldn’t be slowed down by old age. Not only did he try to stay fit enough by going to the gym every day and by keeping a daily routine like going to Mass; he also kept apace with what was going on by going out, being with friends, attending events. In the latter years, he even brought a camera to photograph friends at parties. If it was 6 p.m., he must be on his way to some high-society wake—we’d kid him about such daily routine.

Easily, he must have had the biggest social network of a designer of his era, or any era, for that matter.

This was because he was a people person who made and kept relationships through fortune and misfortune.

I recall him telling me what he did on the historic day of Ninoy Aquino’s funeral, when “a million,” the headline went, “turned out for Ninoy.” He went to the Palace in the morning to attend the Mass with the Marcoses, then rushed to the street to join the throng that awaited Ninoy’s funeral cortege. There, he remembered, he stood for hours, holding an umbrella to protect him from the drizzle, waiting for the remains of his old friend Ninoy to pass by.

While others would call this a balimbing act (“balimbing” was a popular term in the ’80s to denote the flip-flop of one’s political loyalties), friends who knew Pitoy well saw this behavior as simply “so Pitoy”—putting ties and friendships above everything else, for both Ferdinand and Ninoy were his friends from way back.

That the 1986 Edsa Revolution happened on Pitoy’s birthday, Pitoy loved to tell us, was another touch of irony.

Pitoy, a pillar of Philippine fashion, culture and society,  was always in the thick of things, yet he made time for social relationships. He valued ties, sometimes even beyond death.

For instance, long after they were gone, he would sponsor Masses to mark the death anniversaries of society editors who helped build his career. (He inherited the birthday/death lists of the legendary society columnist Lina Flor, and continued to update them.)

Indeed, he belonged to an era that knew “utang na loob,” a Filipino value that appears to have waned, if not disappeared, today.

How one wished that people remembered him as well during the wake for him last week at Santuario de San Antonio, considering that many of his generation are gone. (He outlived his Upsilon “brods” Ferdinand Marcos, Doy Laurel, Gerry Roxas and Ninoy Aquino, among others.)

It seems in a society that has grown “user-friendly,” so to speak, a Pitoy Moreno would be considered old-fashioned, if not a dinosaur.

This is not to say he didn’t know how to use his social connections—he did, and how, but did so while having a genuine concern for you.

No matter his place in high society, Pitoy’s anchor nonetheless was his art and craft. A Pitoy Moreno barong was classic and elegant, so that the most powerful men didn’t feel odd or effete wearing it. He didn’t fool around with the barong—its design and how you wore it—and gave it the respect befitting the national costume.

His fashion shows were always major social events here and abroad, usually presented before dignitaries and heads of state. This was a feat that perhaps eclipsed the whole point of the collection, to begin with—its design—so that people talked more about the who’s who than the fashion. But Pitoy wasn’t only prolific, but also trailblazed in design and ornamentation in his time.

Having the most enviable piña collection, he made full creative use of the indigenous fabric, sometimes overwhelmingly. He did the same thing with other materials, including  the “manton de Manila,” of which he also had an impressive collection. His sense of fashion was grandiose and rich, from beading to appliqué to the use of an obi sash.

And, more important, he used his political clout to present his collections on the world stage.

Many thought that his body of work, its impact on Philippine fashion design and how he promoted Philippine fashion abroad, plus his contributions to society (he ran a foundation for scholars), would land him the National Artist Award. It did in 2009, but the award was recalled following a political controversy.

Although this left him disheartened, I remember he told me, “Ganun talaga, eh. Wala tayong magagawa.”

This was to say he was moving on, for Pitoy was a survivor. Ill fortune didn’t defeat him.

In later years, I’d run into him and sister Virgie at Rustan’s supermarket, with their grandchildren from their nephews and nieces. They were doting grandparents—a side to Pitoy that society barely knew.

In later years also, he had more private time, did more traveling with friends Johnny Valdes (the maverick businessman and founder of Johnny Air Cargo) and architect Gerry Contreras. The three would spend every Sunday just chilling, lunching out. No high-visibility socials.

His atelier-home served like a cocoon to us, a needed break from a stressful lifestyle and a reminder of a genteel lifestyle, when people got together not brazenly for business and PR negotiations but just to while away the time—today, an era more imagined than real.

But in later years, during those lunches, I noticed Pitoy’s memory was beginning to falter. I would mention the names of people who figured in his life and whose orbit he drew me to, such as Teyet Pascual, and he’d just smile, his gaze quite empty. He was trying to remember.

In truth, he was already in his twilight years then. But his smile was so bubbly still that I couldn’t have guessed he was almost gone.