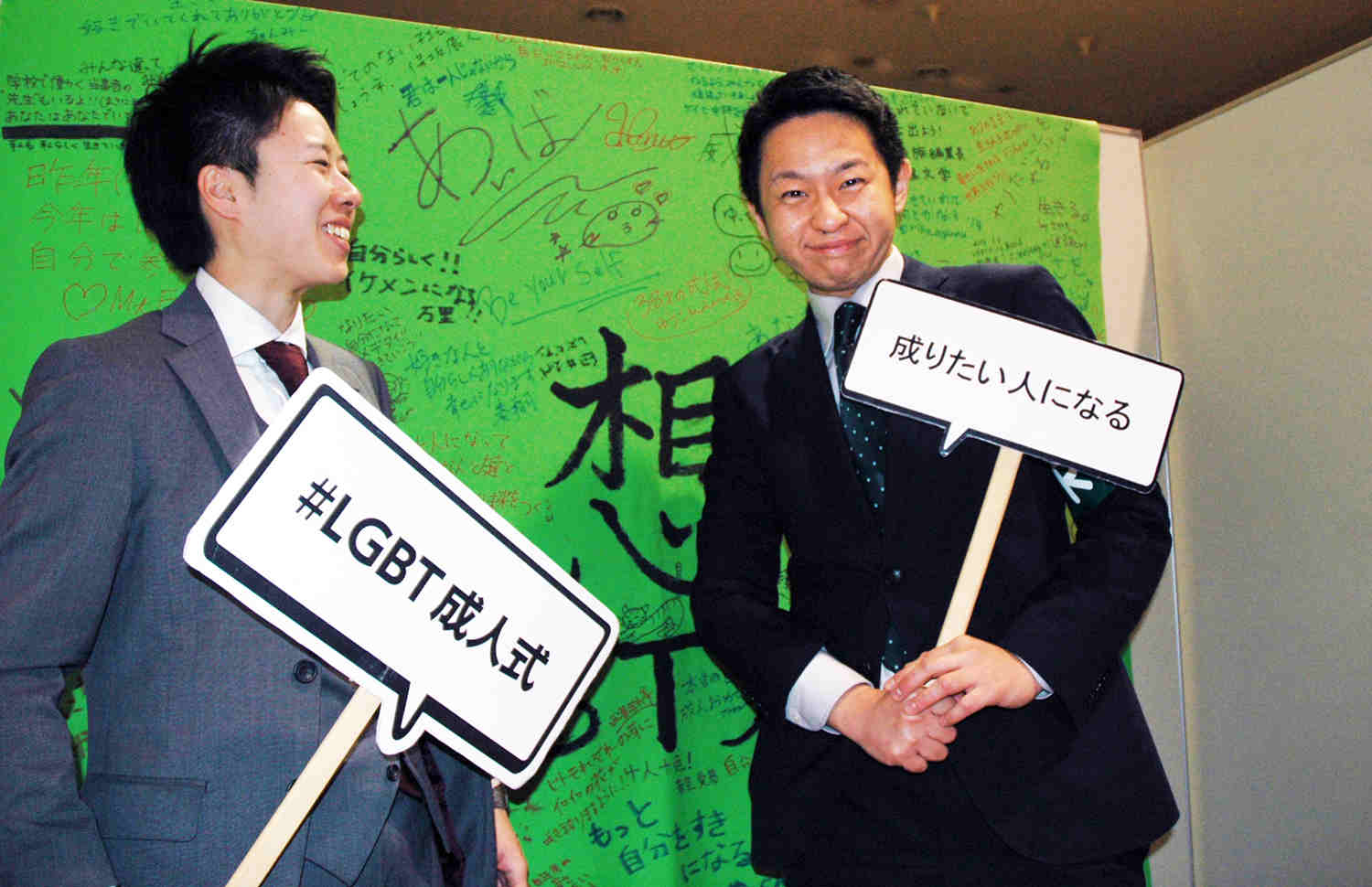 Helping LGBT people live the way they are

On Jan. 13, five days after coming-of-age ceremonies were held in Japan, a similar event for sexual minorities took place at a hall in Setagaya Ward, Tokyo.

The event, called the LGBT coming-of-age ceremony, was hosted by the nonprofit organization ReBit for such people, including those who chose not to attend ceremonies hosted in their hometowns for reasons such as difficulty in wearing the clothes of their preferred gender.

ReBit is aimed at supporting youth from sexual minorities such as lesbian, gay, bisexual and transgender (LGBT) individuals. Yakushi, founder and head of ReBit, happily watched an organization member convey his determination from the podium as a representative of the participants.

“He was a high school student when he first contacted us,” Yakushi, 28, said.

“I’m happy that our belief and activities are being taken up by a new generation,” he added.

The event, which started in 2012, has been conducted in 16 prefectures, from Hokkaido down to Nagasaki Prefecture.

This year, about 200 new adults participated in the Tokyo event. A celebration video was shown on a screen, and politicians from the Tokyo metropolitan assembly, Setagaya Ward assembly and others gave congratulatory speeches. Setagaya Ward introduced a same-sex partnership certificate in 2015, and its Mayor Nobuto Hosaka pledged to further enhance the ward’s efforts.

Event host ReBit has about 500 members, most of them university students. Their activities have two pillars: to spread LGBT knowledge and information at schools and to help LGBT students find jobs.

Yakushi established ReBit when he was a student at Waseda University.

“My aim was to launch an organization I wished had existed in my younger days,” he said.

Yakushi began noticing the difference between his gender identity and his birth sex, which was female, in elementary school after coming back from the United States. Discomfort grew as he was told by adults to behave more “like a girl,” such as being instructed not to sit cross-legged. However, young Yakushi could not identify the reason for his discomfort.

When he was a sixth grader, he finally found out what he was suffering from by learning about gender identity disorder through a famous TV drama series. Yakushi turned to the internet to learn more, but the information he found frightened him. His search came up with many rumors and false information, such as that hormone treatment would lead to death before the age of 30.

As a result, Yakushi made up his mind to hide his gender identity.

“I thought, if somebody knew about this, I wouldn’t be able to live,” he said.

He decided to behave as femininely as possible, presenting himself as a girl in junior high school. He grew his hair out and wore a short skirt.

“I became a class representative and worked hard on extracurricular activities,” Yakushi recalled. “People might have thought I was a trouble-free student, but I was crying every night on my futon because of fear.”

His mental stress reached its peak when he was a second-year high school student. Yakushi attempted to jump in front of a train, but stopped unconsciously at the last second. The experience changed the course of his life.

“I felt as if I had already died once, and decided to come out” as transgender, he said.

Yakushi told his friend about his gender identity, and the friend accepted it. The experience opened up his world — after entering Waseda University, he got to know many grown-ups from sexual minorities.

“I was relieved that people like me can live and do jobs they like, but at the same time thought, ‘Why didn’t somebody tell me all this before, when I was suffering?’”

“I thought there are very many students from sexual and other minorities waiting for the words, ‘It’s OK to be yourself,’” Yakushi said.

Since its establishment, the organization has conducted 550 study sessions about LGBT people and other sexual minorities for students, teachers and education-related government officials. It also has made a set of education materials for teachers called “Ally Teacher’s Tool Kit,” hoping that teachers can become their “allies” in standing up for LGBT rights.

ReBit began helping LGBT students find jobs in 2013. The group provides information on topics such as the hardships they may face and the companies that are more understanding toward sexual minorities. It also hosts events at which students and working people can exchange information. They also conduct seminars for companies.

The activity started based on Yakushi’s experience. He once worked at an online advertising agency after graduating from Waseda. Before entering the company, he had applied to more than 40 companies. Yakushi revealed his gender identity to all the companies, saying he wanted to work as a male. Some companies accepted Yakushi’s request and made encouraging remarks, but he also had to face harsh responses — at one company, Yakushi was told to go home soon after an interview started, and at another company, an executive asked Yakushi a question at the final screening process, saying, “Can you give a birth to a baby?”

The experience made Yakushi realize the necessity of supporting students in their job search.

“We had thought activities to support LGBT children become adults would be enough in the field of education,” Yakushi said. “However, even if children succeed in developing self-esteem through education, it collapses again when they enter society. We realized the need to tackle this problem.”

He eventually quit his job and focused on working at ReBit, which was certified as a nonprofit organization in March 2014. He also obtained qualification as a career counselor.

Yakushi said it is encouraging for him to witness more students, teachers, government officials and companies learn and deepen their understanding about sexual minorities. However, at the same time, he has also witnessed some of his LGBT friends moving to foreign countries, saying it is easier to live there than in Japan.

“There is still more work to be done to make Japan a country where minorities can live comfortably,” Yakushi said.

He said companies that are understanding of LGBT issues are mostly major companies and foreign-affiliated firms in big cities, and it is ReBit’s task to spread information to small and medium-sized companies and in rural areas.

“To change society is to change people,” Yakushi said at the LGBT coming-of-age ceremony on Jan. 13.

“I hope people who attended today will live the way they are in their local towns and workplaces. I believe it would hugely empower the children of coming generations.”