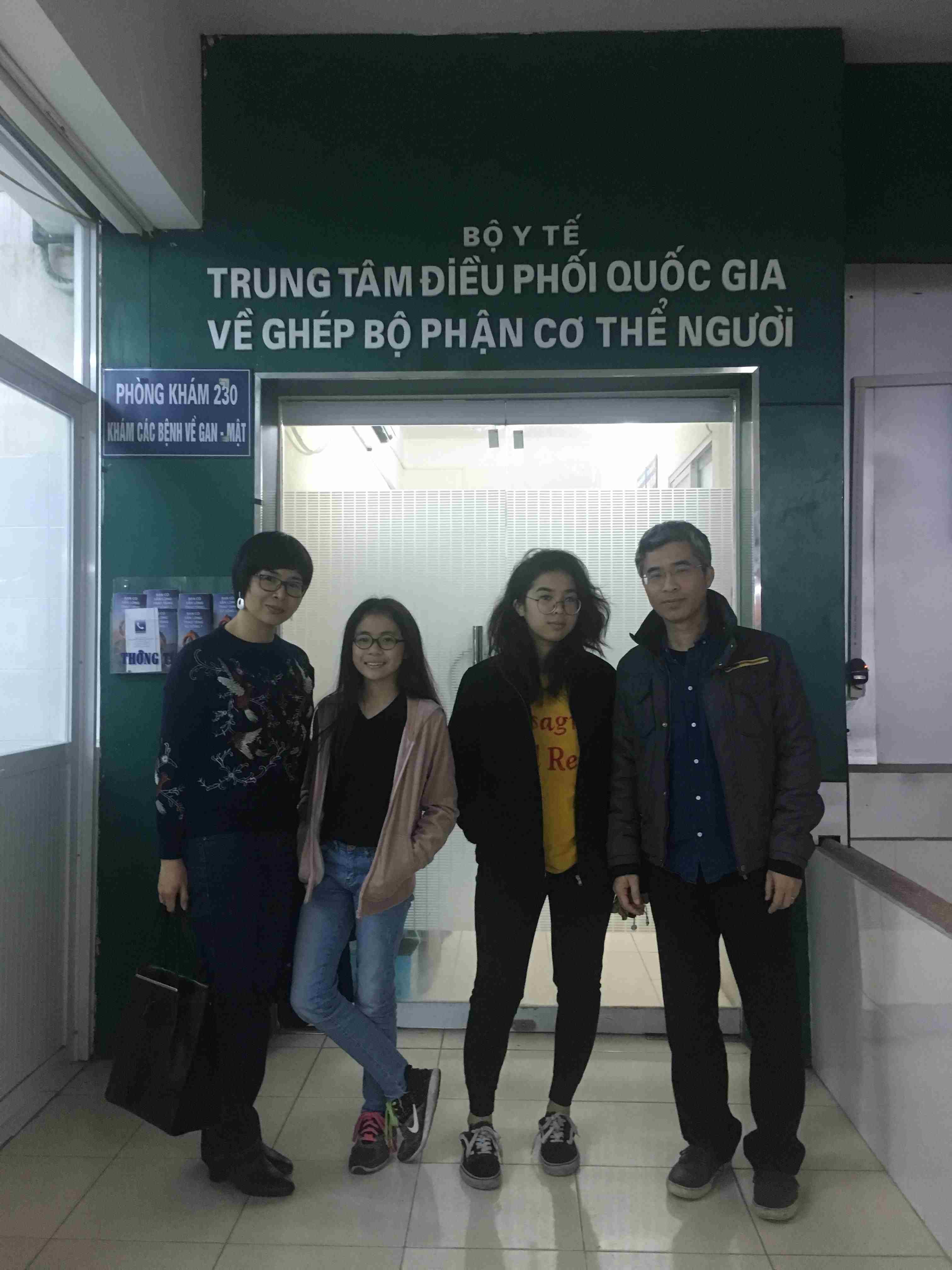 All of 11 years old, Mai An is filling in a form, studiously.

Then, thinking of her heart continuing to beat in another person, she smiled and ticked that box as well.

An was sitting in a small room of the Vietnam National Coordinating Centre for Human Organ Transplantation at Viet Nam-Germany Hospital.

Filling up a form in this room requires a confrontation with the inevitability of one’s death, something that most societies discourage, most of the time. A feeling of insecurity and fear is not surprising at that point.

This heart-warming anecdote was shared on his Facebook by Dr Dang Hoang Giang, deputy director of the Centre for Community Support and Development Studies, recalling the moment when his wife, two daughters – 11 and 17 – joined him in registering to donate their organs and tissues in the event of their demise.

Dr Giang’s family is the first in Vietnam to register to donate their organs and tissues. Mai An and Mai Chi (An’s older sister) are among first adolescents in the country to hold registration cards for organ and tissue donation.

“Every member of my family felt happy to get the organ donation registration card,” Giang said.

The family’s organ donation registration did not just mark the end of 2017, it also signaled the close of a year-long “Journey close to death” that inspired Dr. Giang, and his family, to make the decision.

“Journey close to death” is a series of stories that Giang wrote for the Tuoi Tre (Youth) newspaper about his encounters with people hurt by the loss of loved ones, or facing death due to physical illness.

During this journey, he became aware that dozens of thousands of people in Viet Nam die in traffic or labor accidents. Many of them need hearts, kidneys, liver and other organs to be replaced, but limited supply consigns them to an early demise.

During his travels, Giang met a 20-year-old rural girl from central Thanh Hoa Province, whose stories touched his heart. The cancer-afflicted girl, in the final days of her life, persuaded her family to let her donate her cornea after she dies. The persuasion was not easy in a culture that believes in burying a body with all organs intact.

Sharing such inspiring stories day after day with his family acquainted them with the notion of organ donation and its significance.

“Look directly at your fear,” Giang told his younger daughter whose heart had missed a beat.

“Why are you fearful? When we die, we will not know anything, but our organs can be used for other people. Your heart will continue to beat in the body of another person. It is not worth feeling scared. It is a positive thing.”

Mai An is not the first donor under the age of 18, but she is the youngest one to register for organ donation with her family, said Nguyen Hoang Phuc, deputy director of Vietnam National Coordinating Centre for Human Organ Transplantation.

“This is a special decision because the family deeply understands the meaning of organ donation registration. The parents have taught their children the lessons of sharing and caring,” Phuc said.

Referring to the belief about burying a body with all organs intact, Giang’s observations and research tell him that no religion prohibits organ donation.

“If this belief is eliminated in the society, the lives of dozens, even hundreds of people will be saved each year. This would mark a major social progress,” Giang told Viet Nam News.

People also hesitate to register for organ donation as they are fearful of their own death, Giang said.

“If we look directly at death, we will be calmer, know that our time is finite and live a life that is more meaningful. If we evade (awareness of) death, we may waste our time.”

Soon after Giang shared his story on Facebook, others were inspired to register as organ donors, and in turn, their actions have motivated others to do the same.

Since the center was established, Phuc has also witnessed touching incidents.

“A cousin of mine – a young dynamic ambitious reporter – one day found that she was in the final state of cancer. On the hospital bed, she made one of the final decisions of her life: registering to donate her cornea. And her mother was moved to register with the daughter. Then the girl’s cornea brought light to two blind people she never knew.”

Phuc said that the demand for donated organs is very high in Viet Nam. There are about 6,000 people nationwide who need kidney transplant. Some 3,000 blind people with cornea-related diseases need cornea replacement.

As of last year, about 11,663 people had registered to donate their organs after death or when they are brain dead. This compares to zero donors in 2013. However, this is still a limited number, given the population of more than 90 million.

According to National Committee of Traffic Safety, every year, about 10,000 people die of traffic accidents. If 1 per cent of this number registers to donate their organs, thousands of other lives will be saved.

“One person who is brain dead can donate all of their organs and can save the lives of eight people,” Phuc said.

Giang said: “We can totally change the fact that Viet Nam is one of the countries with the lowest number of organ donors. I know many people are willing to register to donate their organs, but face opposition from their families.”

He appealed for people to show “strong determination and trust to spend time persuading their family. Please spend time and efforts to persuade people around us to change their mind,” he said.

“The registration takes only 30 minutes. It is an easy voluntary act that costs nothing, compared to what we spend on clothes, food and travel….”

Phuc said “Holding the registration card, donors are the happiest people. Since that moment, they know that their organs will give life to someone, acquaintances or strangers. Their death will never be meaningless.”