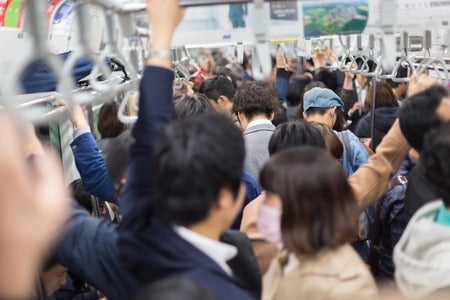 Groping in crowded public places such as buses and trains has become so rampant in Japan that a term has been coined just for the behavior: chikan. The word refers to both the perpetrator and the act itself.

Japanese woman Kumi Sasaki, now based in France, has published a book entitled “Tchikan” recounting the sexual assault she experienced during her teenage years, reports SoraNews24.

Sasaki, now in her 30s, says she aims to highlight the negative effects of sexual misconduct on girls and women. Her encounters are listed in vivid detail, beginning when she was 12 on Tokyo’s Yamanote Line.

“The fingers of his unfamiliar hand went inside the collar of my blouse. Then he touched my back, he touched my legs, my waist, even my butt. He placed his hand directly under the cheeks, quietly raising up my skirt by just moving his fingers, and he touched my left thigh under my skirt,” she says of the first incident.

Since then, she would try to change what she wore, such as switching to jeans instead of skirts, or riding the bus to school just to avoid being molested. But the assault continued, from men of all ages, whether in their late teens or senior years.

Sasaki also relates an incident wherein a middle-aged man not only molested but also stalked her home, telling her to bear his children.

The near-daily incidents affected her mental health to the point of a suicide attempt—only avoided with the help of a friend.

Sasaki has lived abroad and still carries a mistrust for men and trains. The book was released in November 2017 and is currently only available in French.  Niña V. Guno /ra