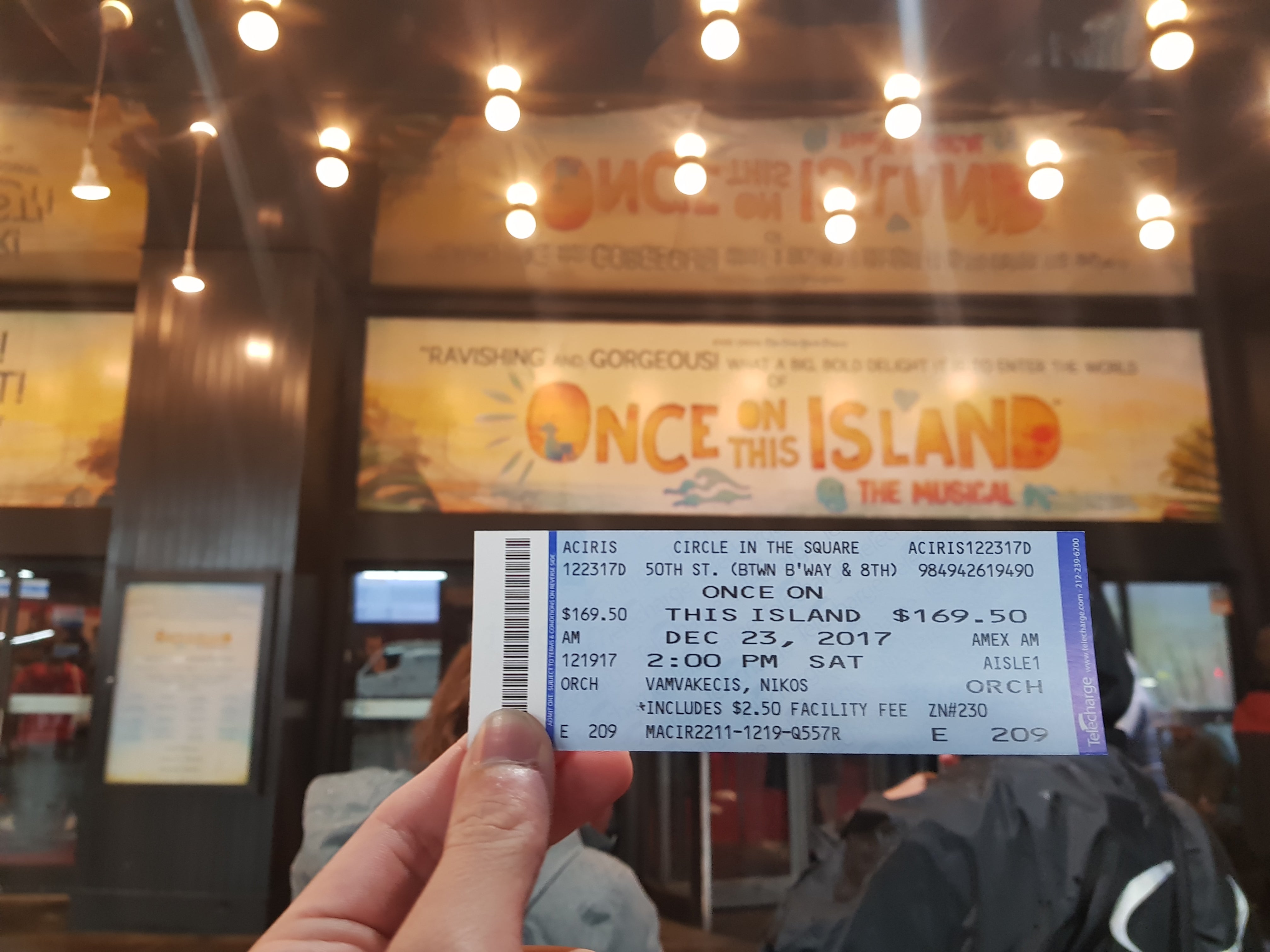 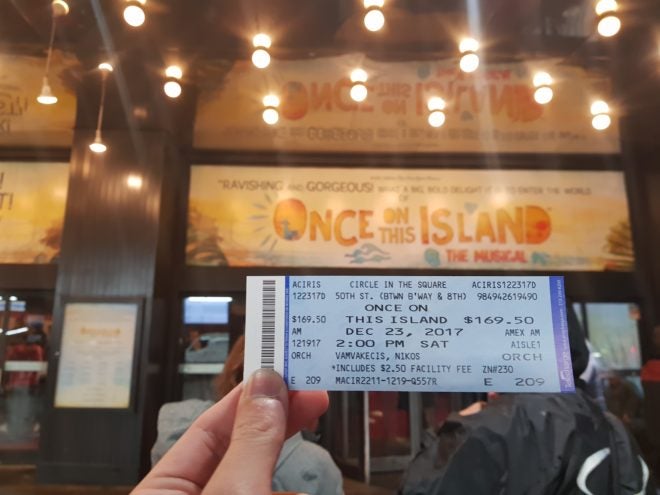 An usherette reminded us not to take photos inside the theater, so we had to put our phones away right at the door. Unlike most theaters I’ve been into, the Circle in the Square Theatre in New York proved to be quite intimate. The seats circled around what looked like an island inhabited by a small village with trash spread all around. We were about to watch the Broadway revival of “Once on This Island,” with Lea Salonga playing one of the gods—Erzulie, the deity of love.

Seated in the center was a small girl wearing her school uniform and playing with her toy piano. While waiting for the rest of the audience to be seated, the island started filling up with other villagers, and even a goat in diapers!

There was no announcement of the show starting; somehow the play already began the moment we entered the stage. We were not an audience outside the play—we were IN the play.

Eventually, amid the chaos of the villagers’ activities, one of the older villagers began telling a story of deities ruling over their little island. Some other villagers then dressed up, using found items in the trash, to represent the deities. So in this story was another story being told! We, the audience, eagerly listened to the tale told by them—a tale of four gods and a headstrong little girl named Ti Moune.

Ti Moune would grow from a small child to a beautiful young lady full of curiosity and love, whose forbidden passion for Daniel, a young man from the wealthy side of the island, the gods would choose as a test to see whether love is indeed more powerful than death—a wager between Papa Ge, demon of death, and Erzulie, the goddess of love.

One thing I found interesting was how this production of “Once on This Island” chose a woman to play the role of Papa Ge, showing the gender fluidity of the gods. As the deities entered and exited throughout the play, they smoothly transitioned from playing ordinary people to being the immortals they represented.

And with each scene, the gods and goddesses gradually became more beautiful and majestic. Every time Salonga, playing Erzulie, sang her part, I could not help but be in awe of her regal aura, as if she was truly a goddess.

I am quite used to plays where the stage is in front of me and lights black out for the next scene. But in this staging of “Once on This Island,” the whole theater was the stage itself, and there were no cuts or stops. It all just flowed very smoothly, with the music, lights and prop movements all helping to transform the stage for every scene.

It was all so cleanly done—one moment I saw an island, the next I saw a car running through the highway, and then the island was a hotel room! There was something magical about this seamless stagecraft.

I also noticed something else that felt delightfully different about the entire show, which I’ve yet to experience in the many musicals I have watched back home. I finally realized what it was mid-show: There was no microphone feedback or echo from the audio system! The voices sounded appealingly natural, with no electronic aid, so that the whole musical came off as if these characters were singing to us only an arm’s reach away.

Toward the end of the play, I could no longer control myself; I mouthed the words to the rousing final song in unison with the islanders dancing and singing and telling their story. I just felt like I was completely part of their story, too.

That’s how wonderful the production team did their job of bringing to life this island where two different worlds came together in an epic tale of love.

This was my first experience of a Broadway musical in New York City—and by far the best musical I have ever seen in my entire life. —CONTRIBUTED