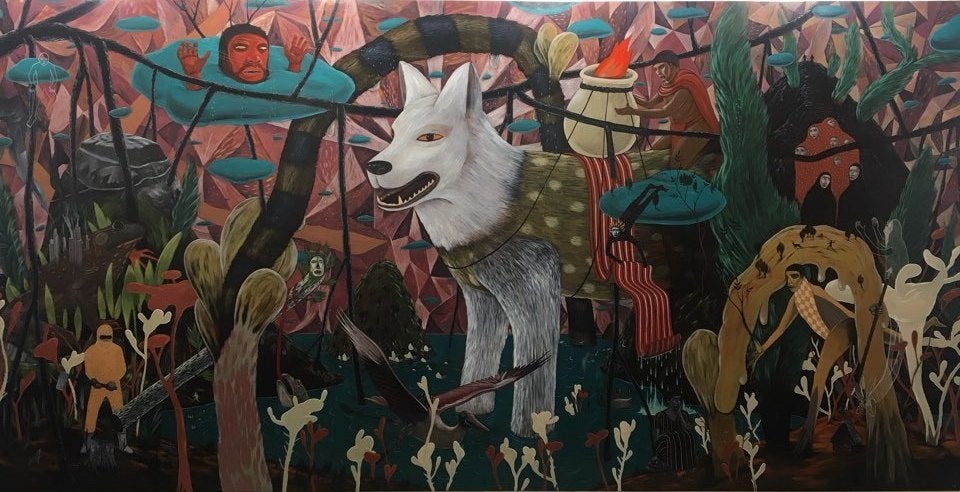 SINGAPORE—Major key works by Filipino contemporary visual artists in the collection of the Tiroche DeLeon Collection of art pieces from emerging markets were unveiled by Art Stage Singapore during Singapore Art Week on Jan. 17-28.

Art Stage also featured the gouache paintings on paper and a tapestry of American modernist master Alexander Calder (1898-1976), famous for his “Mobile” hanging sculptures, one large sample of which was hung at the Marina Bay Expo and Convention Center.

Singapore Art Week is the annual major showcase of the visual arts aimed at positioning the island-state as a regional hub of arts and culture.

Among the Filipino works at Art Stage was “Baston ni Kabunian, Bilang Pero di Mabilang (Cane of Kabunian, Numbered but Cannot be Numbered),” which bested large artworks from 14 other countries across the Asia-Pacific in 2011 to win the Signature Art Prize, organized by the Singapore Art Museum and sponsored by the Asia-Pacific Breweries Foundation of Tiger Beer.

A 305 x 610 cm acrylic-on-canvas, Rodel Tapaya’s mural weaves together ancient Cordillera myths and folklore and connects them with current realities, such as environmental degradation and disaster flooding.

Other Filipino works in the Tiroche DeLeon Collection include large paintings by Leslie de Chavez, John Santos, Don Salubayba and Jigger Cruz, and an installation by Geraldine Javier.

The Filipino works form part of the 400-plus collection by Serge Tiroche and Russ DeLeon. The collection has acquired key artworks by emerging talent from the new markets of contemporary art: Asia, Africa, the Middle East and Latin America.

Israel-born Tiroche is a member of the board of governors of the Tel Aviv Museum who left his career in finance to pursue his passion for art collecting.

In March 2012, DeLeon and Tiroche transferred 230 works in the collection to an investor fund, establishing the first art investment fund modeled on a private collection in the world.

Organizer Lorenzo Rudolf said that Art Stage Singapore continued its focus on Southeast Asian artists. Special focus this year was on Thailand with exhibits on the works of art stars such as Natee Utarit and Kamin Lertchaiprasert.

Meanwhile at Gillman Barracks, “Street Mining: Contemporary Art from the Philippines” was shown. Curated by Filipino Gary Ross Pastrana, the exhibit of works by eight established or emerging artists from the Philippines was presented by Sundaram Tagore Singapore.

Aside from Art Stage, other events of Singapore Art Week included “Future World: Where Art Meets Science” by Team Lab from Japan and “Art from the Streets” at the Art Science Museum; Aliwal Urban Art Festival at the Kampong Glam & Aliwal Arts Centre; and Artwalk in Little India.