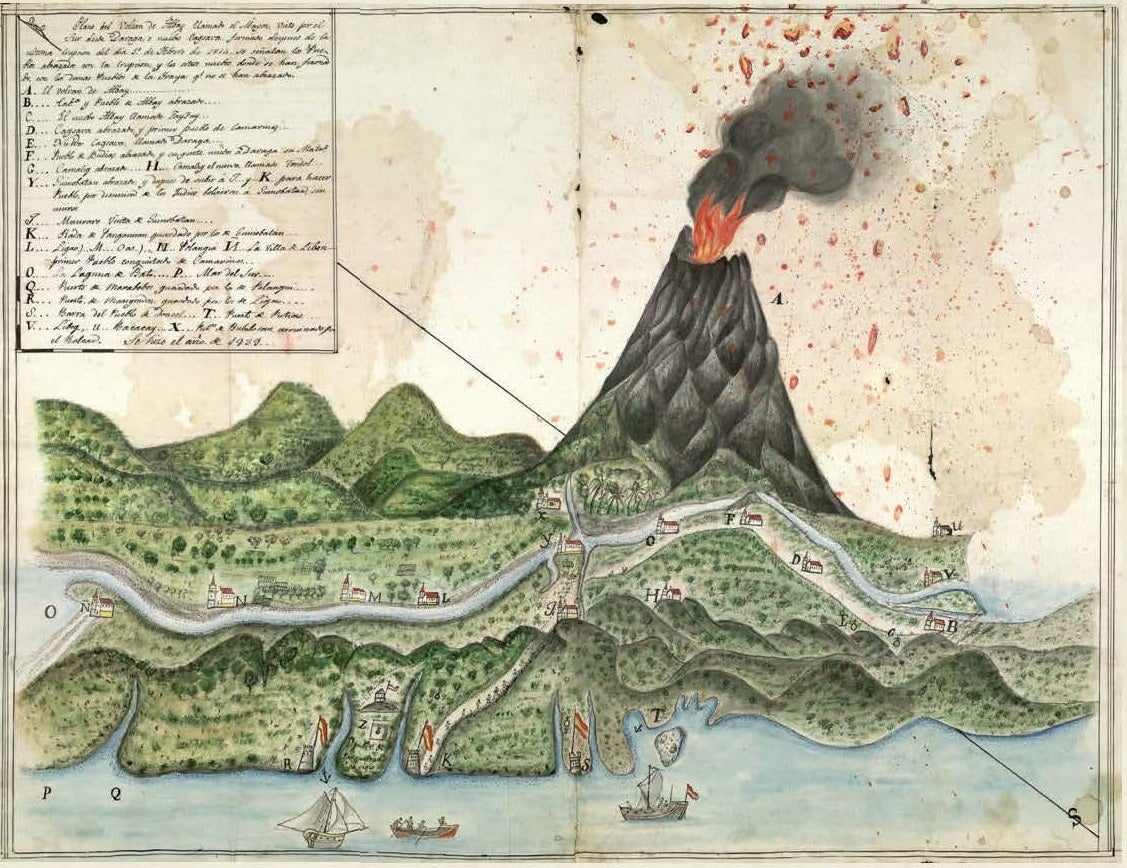 An ancient illustration of the eruption of Mayon volcano in 1814 that wiped out the village of Cagsawa and buried 1,200 villagers should powerfully underscore the history of disastrous eruptions of the world’s most perfectly coned volcano.

The illustration is from the archives of the Franciscan religious order in Spain and is reprinted in Instituto Cervantes de Manila director Carlos Madrid’s historical monograph, “Seraphico: The Franciscan Missionaries in the Aurora Region, 1609-1899,” actually the  catalog of his exhibit for Museo de Baler in 2012.

“Seraphico” is the common medieval term for the Franciscans; their fellow mendicant brethren, the Dominicans, are called “Angelico.”

The Franciscans evangelized the Bicol region.

A historian, Madrid said the illustration was made 15 years after the disaster and included in a Franciscan document reporting on the missionaries’ activities in Bicol that was sent to Spain.

“The document was conceived as a pictorial storytelling of the disaster as seen from Daraga or ‘Nueva Cagsawa,’” Madrid told Inquirer. “It also served as a rough geographical reference to locate the destroyed villages and the subsequent new settlements.”

In the powerful illustration, villages and military and church facilities are in uppercase letters.

As seen from Daraga, the illustration situates several towns in the descending trajectory of the lava flow and shows “incandescent rocks coming out from volcano,” Madrid writes in the monograph.

The villages include Bacacay (letter U), Libog (V) and Albay (B).

Among the devastated villages were Bubolosan (X), Guinobatan (Y) and Camalig (G).

Around Panganiran (Z) could be seen the port of Marigandon (R) and military and church structures destroyed.

Madrid writes that the Camalig survivors were relocated to Tondal (H), which was later called “Nuevo Camalig.”

The surviving population of Guinobatan was relocated to either Panganiran and Maurato. But squabbles there with the villagers later compelled the survivors to go back to Guinobatan.

Cagsawa never recovered; its ruins are highlighted by the church steeple, the only structure that can be seen sticking out of the mountain of lava that buried the town. The ruins are now a tourist attraction.

The Cagsawa survivors were resettled in Daraga, its church built from the lava rock spewed out by Mayon. The church has been declared National Cultural Treasure by the National Museum of the Philippines.

Carlos said the illustration of the 1814 Mayon eruption and other historical documents can be checked by researchers at Casa Azul, a cultural extension program to be inaugurated by Instituto Cervantes in April.