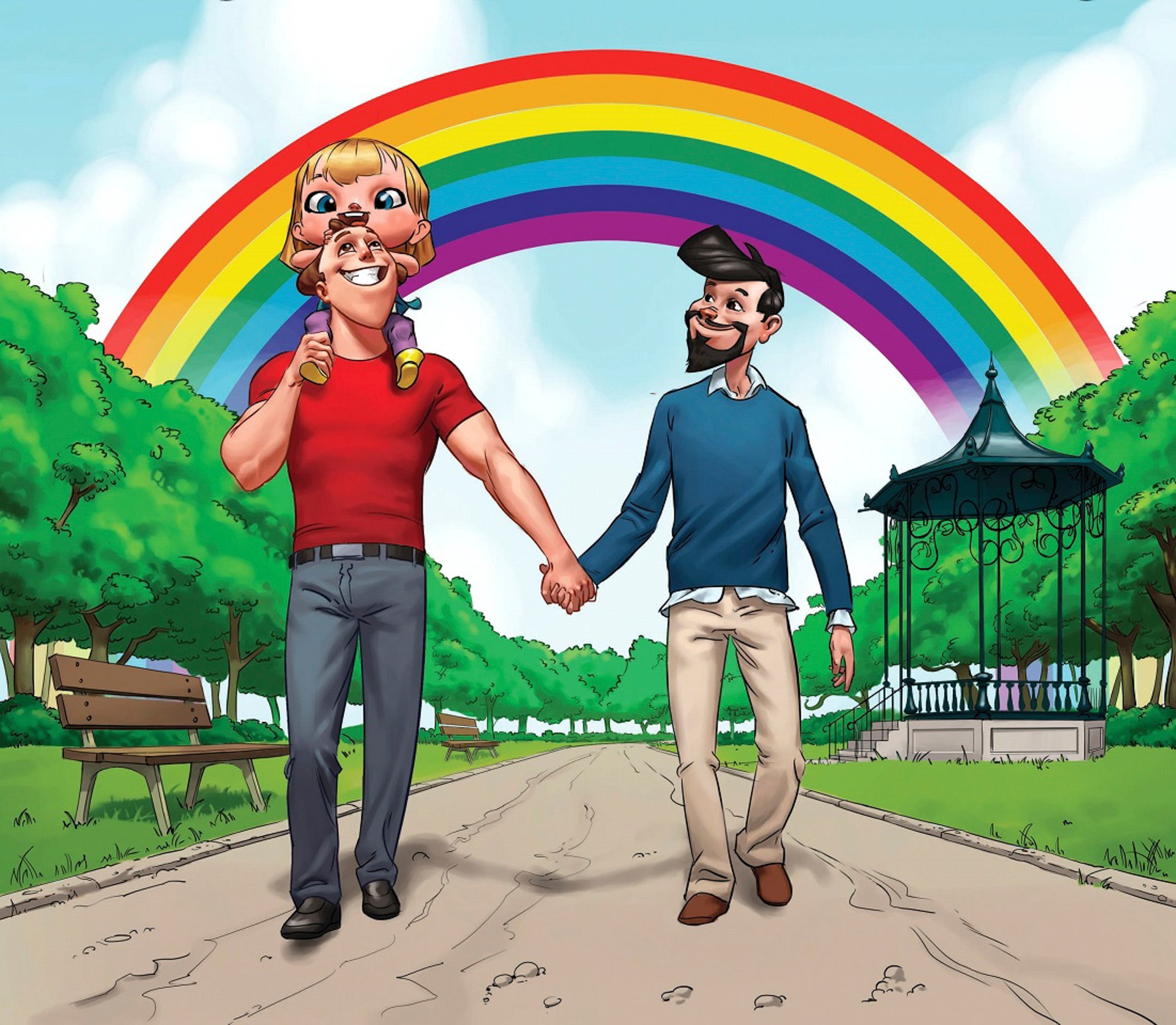 This drawing released by Croatian association 'Rainbow Families' shows an illustration from the first picture book for children about same-sex parents. The picture-book entitled "My Rainbow Family," to be presented on January 18, is intended for pre-school children, a project coordinator told AFP. The Catholic Church-backed Vigilare group claimed that the book would be donated to schools and kindergartens and has asked the education minister to consider blocking the "entry of this controversial literature into Croatian schools." / AFP PHOTO / HANDOUT / STR

In Croatia’s first children’s book about “rainbow families”, two mothers help their son Roko to put on his skis. It’s part of a simple story aimed at changing attitudes in the staunchly Catholic country.

Created for kindergarten-age children, the picture book describes the everyday life of two four-year-olds: Ana, who has two fathers, and Roko with his two mothers.

“Ana likes it when her dads read her a good night story,” states the caption under one of the illustrations.

“Last year mum Ines and mum Lucija helped Roko to put on skis for the first time,” says another.

“Some find Roko’s family unusual at first. But that doesn’t bother Roko since both of his mums love to make him banana pancakes, which he adores.”

Daniel Martinovic, of Rainbow Families, an association of lesbian, gay and transgender people who have or plan to have children, launched the book in the capital, Zagreb earlier this month.

“We made it for our children because we wanted them to be able to read about families like ours,” said the IT expert, a “proud parent” of a three-year-old.

The launch of “My Rainbow Family” was attended by a few dozen guests and numerous reporters — but no children of same-sex parents.

“My biggest concern is that my child sees me or my partner being attacked,” he said.

Nearly 90 percent of Croatians are Roman Catholic, and a Church-backed group earlier this month criticised the book, which it described as “controversial”.

“It is an action hiding a clear political and ideological agenda,” the Vigilare organisation said, in an open letter to the education minister.

The group claimed that the publication would be donated to schools and kindergartens and asked the minister to consider blocking this — but Rainbow Families denied such donations were being planned.

Five hundred initial copies of the book were published for distribution free of charge to those interested and an online edition is also available in Croatian and English at www.dugineobitelji.com.

While the book was conceived for children of same-sex parents, it can help other youngsters, including those who are adopted or living with grandparents or a single parent, said co-author Ivo Segota.

“These are all realities that exist in Croatia,” said the 35-year-old biologist, who is gay and hopes to have children with his partner.

Croatia, the European Union’s newest member state since 2013, has seen a gradual liberalisation of gay rights in recent years, with homosexual couples able to register as “life partners” since 2014.

The law granted them the same rights as heterosexual married couples on matters such as property, inheritance, tax, health and social insurance.

But it did not include provisions regulating the adoption of children, leaving it down to state-run bodies such as social welfare centres or tribunals to decide on individual applications.

And attitudes in patriarchal Croatian society appear to be changing at a slower pace than the law.

Visits to the doctor or a first day at school still draw whispers and sideways glances, same-sex parents say.

Recent years have also seen a growing wave of nationalism and hardline conservatism.

Rainbow Families, which has about 80 members, provides education to social workers to try and improve the situation for families of same-sex parents.

Last year, a gay couple filed the country’s first lawsuit for discrimination in the adoption process, after a social welfare centre rejected their adoption request. They are awaiting a hearing.

“The situation is changing for the better, and we hope that one day… families won’t be afraid of being different,” said Martinovic.