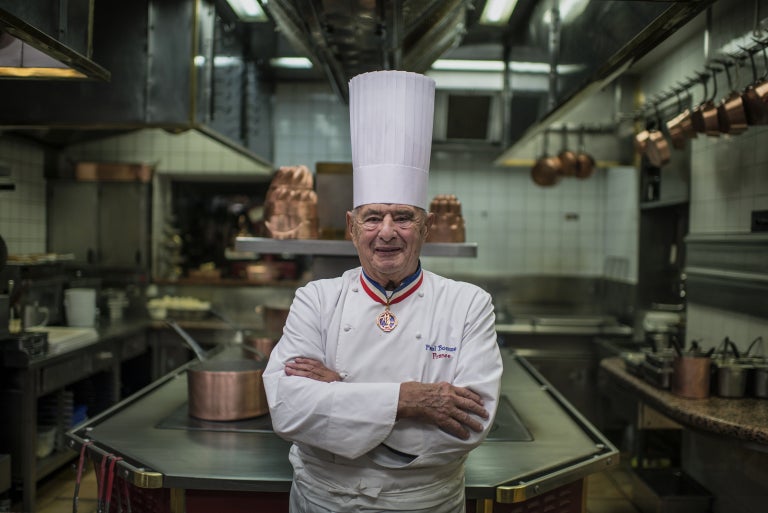 "Monsieur Paul" as he was known, was France's only chef to keep the Michelin food bible's coveted three-star rating for more than four decades. Image: Jeff Pachoud / AFP

When Japanese cook Kazunori Nakatani talks about his mentor Paul Bocuse, the legendary French chef who died last week, he still uses the present tense: “For us he is a god!”

Bocuse is revered in France as the “pope” of the country’s treasured cuisine, and gained international recognition in part for his revolutionary “Nouvelle Cuisine” in the 1970s.

But he has a special legacy in Japan, where many local chefs trained at his Institut Paul Bocuse, near Lyon.

“He’s a god, not only in the world of French cuisine, but in the entire world of cuisine,” said Nakatani, executive chef of the Paul Bocuse brand in Japan.

“Good produce, well seasoned, good cooking: that is good cuisine,” he added, switching to French to reel off his mentor’s golden rules.

“These are the words that will stay with me.”

Nakatani was flying to France this week to join more than 1,500 chefs from around the world paying tribute to Bocuse at his funeral in Lyon.

The French chef first visited Japan decades ago, and struck up a partnership with local chef Hiroyuki Hiramatsu, who would go on to manage Bocuse’s six brasseries and two restaurants in Japan.

The first opened in 2007, the “Brasserie Paul Bocuse Le Musee,” inside Tokyo’s National Arts Centre, where it occupies a dramatic spot atop a massive inverted concrete cone that dominates the museum’s glass atrium.

A staircase runs down from the center of the dining space into the depths of the cone, where cooks work silently and gracefully, delicately garnishing dishes that replicate Bocuse’s French delicacies.

The kitchen resembles the steel interior of a spaceship, with copper pots and pans hanging on all sides, and cooks in chef’s whites gliding past each other.

They tenderly prepare slices of duck terrine presented with mini cornichons and plump and golden portions of chicken confit.

Then coarse salt is sprinkled on the dishes, which are intended to transport diners thousands of kilometers away to the Lyon region where Bocuse lived and worked.

Jun Ueda, 42, has worked at the brasserie since it opened, and can hardly believe its founder is gone.

“It’s deeply sad,” he said, his starched chef’s hat perched atop his head.

“I lost my father at the age of 17 and I can tell you the shock was just as great.”

“He’s the one who inspired me to cook French food,” he added, as a cook nearby sliced expertly though a sitting row of glistening red tomatoes.

Each of Bocuse’s restaurants and brasseries in Japan was designed to mirror of one of his establishments in France, with the museum brasserie’s menu modeled on that of his Brasserie des Lumieres in Lyon’s football stadium.

“That is one of the reasons why we wanted to open our first restaurant here. Because the aim is to spread French cuisine. So this is an ideal place.”

“Monsieur Paul” as he was known, was France’s only chef to keep the Michelin food bible’s coveted three-star rating for more than four decades.

But he distained overly fussy food, seeking to create only dishes that would tempt diners back “for a second helping.”

“He left us his philosophy, the way he thought about cooking,” said Nakatani, who did several training sessions in Lyon.

“He was always saying ‘simply’, and I think that best sums up his cooking philosophy.”

Bocuse, who died at 91, was a larger-than-life character, and infamously maintained a relationship with his wife as well as two lovers.

He also exuded a warmth that extended to every employee at restaurants, his former students say.

“He treated everyone like a family member, even staff members, dishwashers,” said Nakatani.