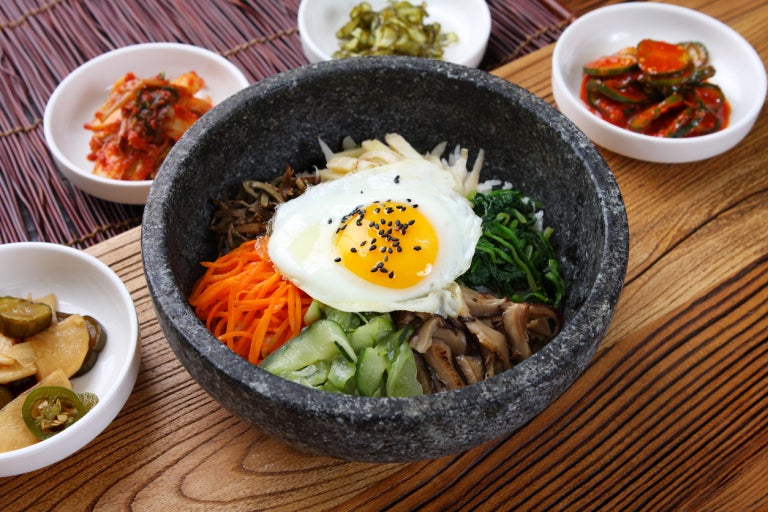 Promoters of Korean gastronomy have set out an ambitious goal for themselves: to make K-food as popular and ubiquitous as Japanese sushi around the world, over the next five years.

It’s a tall but, perhaps, not impossible order, given the momentum of Hallyu, or Korean culture and the growing acceptance of kimchi in all its pungent, spicy forms at restaurants around the world.

Next month, the country’s gastro-diplomacy efforts will get a major boost when the PyeongChang Olympics bring the world to South Korea’s doorsteps and shine the spotlight brightly on its rich and varied culture, including its cuisine.

As part of outreach efforts to elevate Korean gastronomy to the same plane as Chinese, Japanese, Thai and Vietnamese foods, the Korean Food Promotion (KFMI) Institute has launched aggressive campaigns in key markets around the world, in the hopes of getting the local food media’s coveted attention.

On a brisk fall evening in Paris, where Korean cuisine lags in popularity behind its Asian cousins Japan and Thailand, more than a dozen local food journalists have accepted an invitation by the Korean institute to dine at one of the hottest restaurants in town, Pierre Sang.

Sang Boyer is the poster child for the campaign in France: a Korean adoptee of French parents and celebrity chef who shot to fame for being a finalist on the popular cooking TV show “Top Chef”, the 38-year-old is far and away the most high-profile ambassador for Korean gastronomy in France.

The night’s culinary theme is a tale of two marriages, he tells the group. The first, a figurative fusion of his French heritage and Korean origins, the other, a literal interpretation of his life with his Korean-born wife.

The entrée, galbi jjim, is perhaps the most convincing dish of the night. Coherent and uncontrived, beef bourguignon meets traditional Korean braised, short ribs in a soy sauce-based marinade, served on a bed of lentils, spiked with shards of kimchi.

But these are not just any lentils. They’re “lentilles verte de puy,” a specialty of Sang Boyer’s hometown of Le Puy-en-Velay in Auvergne, south-central France.

“This dish represents my life with my wife and family,” Sang Boyer tells the room proudly.

While K-food may have successfully penetrated the mainstream dining scene in urban centers across North America and Asia, it’s still a relatively fringe cuisine for much of France and other parts of the world.

To change that, the K-food institute’s strategy has been to emphasize the health and wellness merits of Korea’s gastronomic heritage, and its respectful harmony of seasons and ingredients.

“Korean cuisine is simple, well-balanced and not heavy,” says the institute’s secretary-general Kim Dae-geun, the man leading the charge towards K-food domination.

He cites a study published last year in the Lancet, which found that South Korean men and women had among the longest lifespans of 35 industrialized countries studied.

Authors note that South Koreans boast a lower body-mass index and lower blood pressure levels than most countries, which Kim says can be credited to the traditional Korean diet that gives prominence of place to the plant kingdom.

The dish that best embodies the pillars of the country’s culinary traditions? Bibimbap, the Korean version of the Instagram-famous Buddha bowl, with rice topped with assorted, cooked, seasoned vegetables like spinach, carrots, sprouts, beef, fried egg, and a hot bean paste that binds the lot together.

“It’s simple, fresh and full of nutrients and flavor.”

Meanwhile, Kim acknowledges his goals of making kimchi and bibimbap as ubiquitous as sushi may be lofty.

But that’s only because he’s had a belated start.

“Japan started promoting their gastronomy in the 1960s. We only started campaigning in 2010,” he points out.

Bibimbap the next sushi?

To fast-track their catch-up, the Korean food institute has been targeting countries like France and Italy, countries which already have a strong gastronomic culture, and setting up collaborations with local star chefs.

Kim says he’s already seen Korean cuisine make inroads in the City of Light where he lived for four years in the early 2000s, when there were a modest 30-40 Korean restaurants in the gastronomic capital.

Today, there are approximately 100 Korean addresses, including some of the city’s most fashionable eateries like Pierre Sang, Mandoobar, which specializes in Korean dumplings, and Hero, which dishes up KFC — Korean Fried Chicken.

Kim also envisions a strategy that will certify the most authentic and best Korean restaurants around the world and offer standardized recipes for some of the most popular dishes in the Korean repertoire.

Japan, Italy and France offer similar certification programs that authenticate the best chefs, dishes and restaurants around the world.

In the United States, Roy Choi’s mobile Korean-taco stand Kogi BBQ is credited with kickstarting the food truck craze. The runaway success of his Mexi-Korean food trucks helped him go on to open brick and mortar restaurants in Los Angeles at the trendy Line hotel.

And chef David Chang has expanded his Momofuku empire, which reinvents Korean classics, from New York to Toronto, Sydney, Australia and most recently Los Angeles. Chang was also tapped by NBC to serve as special food and culture correspondent during the PyeongChang winter Olympics next month. JB

Half-Korean girl mesmerizes the internet with her stunning beauty