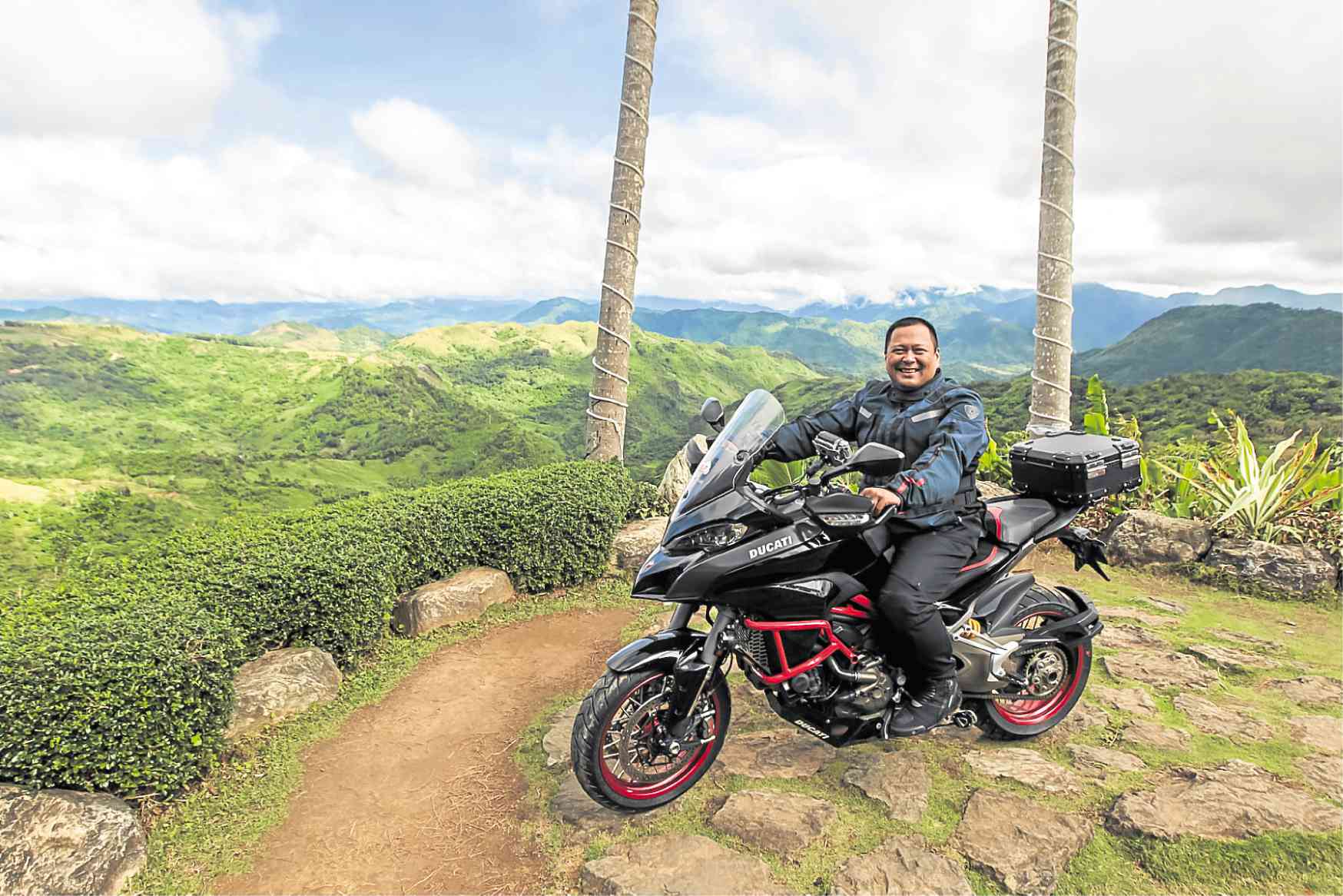 Astride his Ducati, with a sweeping view of Tanay -PHOTO BY LEOM. SABANGAN II

The sun was just coming up over the eastern mountains when our motley crew took off from Marcos Highway in Marikina into the green hills of Tanay.

It was early Monday morning, and we faced the morning rush of commuters in the opposite direction.

We could have been any group of motorcyclists off on a jaunt into Marilaque—the eastern road that goes from Metro Manila to Rizal, Laguna, Quezon and beyond—a favorite escape route for the two-wheeled fraternity.

Except that in the lead, on his Ducati Multistrada—a big, 1290-cc. touring cycle—was Sen. JV Ejercito, incognito in full riding gear.

Flanking him were three of his riding buddies, one on another Ducati and two on BMWs. I tried my best to keep up on my Kawasaki cruiser, while PDI photographer Leo Sabangan brought up the rear astride his trusty Kymco scooter. By the time we hit the twisties going up to Tanay, we had the road to ourselves. Almost.

On the way up, a couple of daredevils in full racing gear blew past us at full throttle on their souped-up underbones. Apparently, illegal street racing has become a thing in Marilaque on Sundays. These hotshots were no doubt practicing for next weekend’s race, oblivious to the danger they posed to themselves and others.
In no time at all, we were enjoying a hearty al fresco breakfast with a panoramic view of the mountains. Numerous cafés and restaurants have sprouted along Marilaque to cater to the growing number of visitors from the city, not just motorcyclists but regular couples and families on outings.

“This is my favorite form of stress relief,” Ejercito says.

Away from the high-pressure world he inhabits, he can just relax and enjoy the ride, the view and the local cuisine.

A confirmed motorhead, the senator used to race cars, and still competes in the annual Toyota Vios Cup. For the last two or three years, however, his passion has turned to motorcycles.

It wasn’t too serious, but he had just won his first term as mayor of San Juan, and he received a furious lecture from his father, former president Joseph Estrada, and mother, current San Juan mayor Guia Gomez.

Reluctantly, he sold the Ducati racer and buckled down to work.

Fast forward: after three terms as mayor, a stint in the Lower House as San Juan representative and now the Senate, Ejercito found himself once more bitten by the motorcycling bug.

“I really love anything that has an engine: cars, bikes, trucks, planes, even trains—that’s why I have this passion for railways,” he explains, referring to his pet legislative project—the revival of the country’s decrepit train system.

Ejercito has been a car enthusiast since his college days at De La Salle University, where he majored in political science. But lately, he says, the thrill has gone from the car scene—too many rich poseurs.

“Three years ago, one of my neighbors bought a Ducati Scrambler, an 800 cc. bike,” he recalls.

“It was easy to ride, so I got one for myself. But I hadn’t ridden in 18 years, so I was practically a beginner again.”

Ejercito joined a riding club, and began practicing until he regained his bike handling skills. He received a bit of coaching from friends who were veteran riders. Marilaque was a regular training ground, as well as Tagaytay and other nearby destinations.

Today, he has four very nice bikes in his stable: the Ducati Multistrada, a BMW R9T roadster, an MV Agusta adventure bike and a KTM 1290 GT.

(Luckily, he has a very understanding wife.)

He could also argue that he rides in aid of legislation, as it were.

Last December, he went on a ride from Baguio to Sagada.

“I can only describe it as epic,” he says. “It was probably the best ride of my life so far. Baguio to Sagada is only 160 km, but it’s all winding mountain roads, and the surface is slippery from algae because of the constant flow of water, so it took us four hours. We were very careful, and it was very cold.

“The next day, I rode down to Bontoc to meet with the governor and the mayors to find out their needs since I’m also on the committee for health,” he continues. “These are far-flung communities that don’t get visited regularly because they’re hard to reach for ordinary politicians, even with a chopper—and they don’t have too many voters. But I like riding, I like the place, so I take advantage of the ride to reach out and help.”

Ejercito has also ridden “in aid of legislation” as a member of the committee on housing, when he visited housing for Armed Forces of the Philippines and Philippine National Police personnel on his bike.

“One nice thing about riding motorcycles is you meet all classes of people and it helps me do my job,” he says. “From captains of industry like Jaime Zobel de Ayala to ordinary people on their underbones. People feel you’re easier to approach if you come on a bike. They’re instantly at ease.”

A car is also a layer of insulation between a public official and his public. On a motorcycle, Ejercito sees the same day-to-day realities that ordinary citizens face: poor roadwork, lack of safety features such as barriers on steep, curving roads, hazards such as the aforementioned street racers, illogical rules such as asking motorcyclists to ride without their helmets in some villages and towns.

The senator intends to continue mixing a little work with his leisure, with trips to Banaue, Kalinga-Apayao, Abra, and Legazpi City for the annual bikers’ convention already on his calendar.

Ejercito admits that part of the appeal of riding bikes is that it reminds him of a more carefree time in his life.

“Even though I was the mayor’s son, I grew up on the streets,” he recalls.

As a boy in old San Juan, he would ride his bicycle around the whole day, going to the store or to the barangay hall to play basketball with the other street kids, sometimes getting into “friendly” fights (instigated, in one instance, by his father the mayor).

Riding also offers a temporary respite from the world of politics, but inevitably the subject turns to his plans.

With his mother on her last term as San Juan mayor, the senator is being pressed to run once more for the office he held for more than a decade, as their perennial rivals, the Zamoras, have thrown their hat into the ring.

Wouldn’t that, I ask, be like going back to a Scrambler after riding the Multistrada?

“I’ve been there, done that,” he says. “I helped turn San Juan from a municipality into a city, and increase its revenue from P300 million to P1.2 billion when my term ended. There’s nothing left to prove.”

On the other hand, he seems to have settled into the groove as senator. As vice chair of the powerful finance committee, he has been able to defend the Duterte adminstration’s line agencies, including transportation, health and local governments.

“I would like to continue and I hope I will be given the chance to serve as senator again because there are things I would like to see accomplished—like the massive infrastructure development and a modern railway system which is the weakest link in our economy.”

A few days before, Ejercito attended the groundbreaking ceremony for the Philippine National Railways’ north rail project which will link Manila to Pampanga and beyond.

“Next will be the south rail project,” he says. “It’s a dream and an advocacy I’ve been fighting for for the past five years. When the Bicol Express has been revived and is up and running, I can probably retire from politics.”