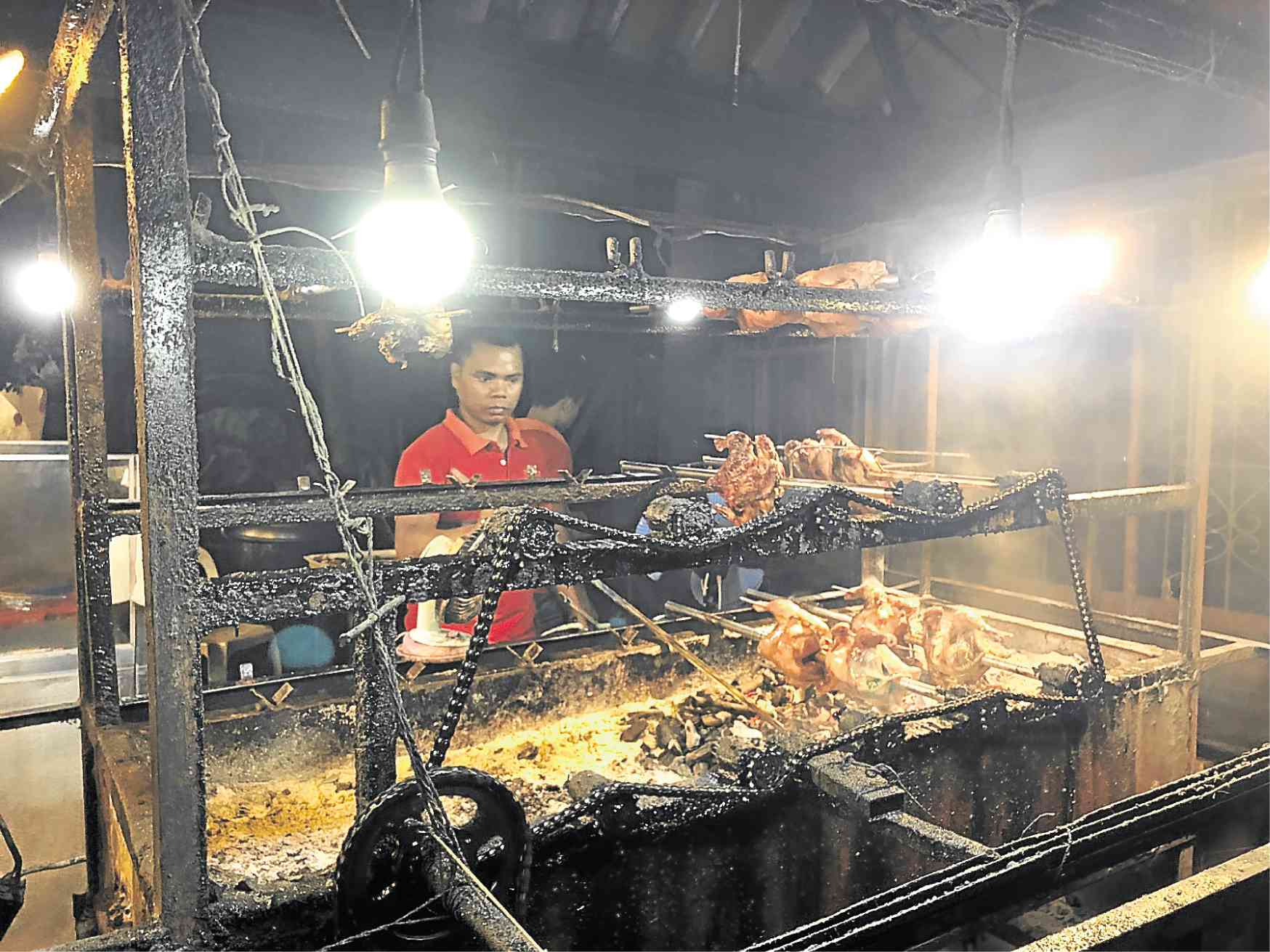 When in Davao, indulge in the city’s barbecued specialties.

Divine barbecue in the ‘New Jerusalem’

Last weekend, I went to Davao for work and had an amazing time. I walked the streets at night—peace and order is what the city is known for after all—tried local chocolate and cheese, and had quite a few memorable meals.

The trip was an eye-opener in more ways that one. Davao is, after all, what businessmen refer to as “NJ” or “New Jerusalem”; it’s rumored to be the new seat of government. And most of all, it’s boomtown.

Before we get into the nitty-gritty of Davao, I have a few words to say about the meal we started the trip with, which was in the staff canteen of Naia Terminal 2. As grim as it sounds, it is still by far the best meal I’ve had at the PAL terminal.

For a carrier that once claimed it wanted to compete with Cathay and Singapore Airlines to be an Asian hub, to redirect long-haul traffic to the spokes in the region, the carrier’s terminal lacks a certain je ne sais quoi compared to, say, Changi Airport or Chek Lap Kok, where you can enjoy roast goose noodles (or dan-dan mien if you have lounge access) during your layover.

But not only are Chinese and Korean airports now vying for the position of the lower-cost alternative stopovers for a trans-Pacific flight, the whole hub-and-spoke model is facing competition as the 747s retire and the Airbus 380s are proving expensive to run—and the composite aircraft like 787s are being rebuilt to service longer routes, which means direct flights between secondary airports.

But given that Manila is still the hub if you’re connecting on any Philippine Airlines flight, you’d think there would be more competition to cater to the travelers who spend hours waiting for their next flight and need to have a good meal, get a massage and knock back a couple of shots before getting on those infernal night flights to the US.

It is a mystery why there is no food at Naia Terminal 2, just as it is a mystery why they bother tossing at you a round bun with a mysterious goo in it during the flight. I guess it’s better than starving, which is what happened to us on our Osaka to Sapporo flight, but Philippine Airlines, even if the plane was five hours late, could be counted on to have “kisser” landings and decent food.

My first impression of Davao was that it was endless. There was a bit of what the local driver referred to as “traffic” but which, coming from Manila, I would call “a bunch of cars on the road.”

The impression of endlessness continued because as we moved out of the built-up urban area and drove up into the winding hills, I asked where we were and was told that we were in Davao.

And apparently, if we continued driving for another two hours, it would still be Davao.

In the city there are lots of restaurants, including an ancient but brisk Chinese restaurant called Ahfat where I had excellent seafood, and a row of bustling Indian restaurants near the medical school which are (I hear) more authentic than anything you can get in Manila.

I was made to understand that, aside from durian, the most Davaoeño you could get in terms of food was to find a good barbecue place, get a couple of cold beers and keep the food coming. The next problem is that because there’s a barbecue place every five meters, the outsider has no idea where to go, except to generally follow the crowd.

There were barbecue places with Monobloc chairs on packed earth, some fully enclosed with air-conditioning, and everything in between. How do you choose? Why was one restaurant, which was packed even at a late hour for dinner by Davao suburb standards, bustling while the upscale place opposite the road was empty?

Our host took us to an open-air place where the smell of barbecue smoke from the pit wafted over everyone and fumigated us thoroughly: a good sign, perhaps even a requisite for the ideal barbecue place. We had tuna kinilaw, because that was obligatory.

Then we got over a dozen skewers of various pork and chicken bits, including lots of liver and gizzard. (The test for good barbecue, a friend told me over an internet conversation later, is that they not tenderize the meat by boiling or braising it beforehand. It must be cooked raw on the grill.)

We had sisig, kilawin na kambing and a plate of seaweed as salad. We had a huge pile of food on the table, a communal stack of sharing plates, each making it our own with our individual sawsawan: mashing up the tiny chilies hardly larger than a grain of rice, calamansi, soy sauce. And it was all divine.

Honestly, I could have eaten barbecue the whole time we were in Davao. But when my friends found out where I was, I was bombarded with suggestions: Bon Appetit, Yellow Fin, Belito’s Vineyard, Claude’s, White House.

And everyone had his favorite barbecue place to recommend. All this just means that I have to go back to Davao—perhaps during durian season so that I can overcome my fears—and eat my way through the city. Since there’s almost 2,500 sq km of it, that may take a while. —CONTRIBUTED