How smartphones could be ruining your dinner | Lifestyle.INQ ❮ ❯ 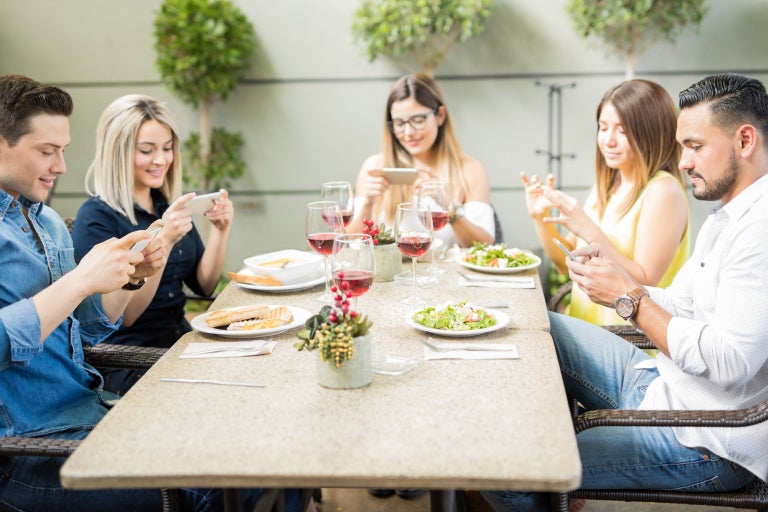 How smartphones could be ruining your dinner

A new psychological study has revealed the negative effect that smartphones can have on human interaction, finding that using the devices can actually cause us to enjoy our time with others less.

The team set up two different conditions for the study, asking one group of participants to keep their phones on the table while eating and asking a second group to put their phones away.

After the meals, both groups were given a longer questionnaire asking how much they enjoyed the food, the conversation, and the overall experience, as well as how much they had used their smartphones.

The team found that diners who had put their phones away reported having a happier experience than those whose phones were on the table.

The team concluded that it was the distractions from smartphones that reduced the enjoyment of sitting together to share a meal, with Kushlev adding that, “Statistically speaking, the effect was pretty significant.”

While Kushlev acknowledges that smartphones can have a positive effect, making you feel closer to the person you are texting, he added they can also have a negative effect, making users feel less connected to those who are around you.

“What is interesting to me, and I think to a lot of people, is, ‘How is this changing fundamental human behaviors that have been central to human society and human well-being throughout history?'”said Kushlev, who added that as well as face-to-face interaction, sharing food is a traditional way of bonding with others.

Kushlev also added that the results are particularly important as today’s younger users cannot remember a time without them, meaning it can be easy to accept smartphone use and its negative effects as the norm.

“I don’t think we should accept that phones should be as distracting as they are today,” he said.

The results can be found published online in the Journal of Experimental Social Psychology. JB