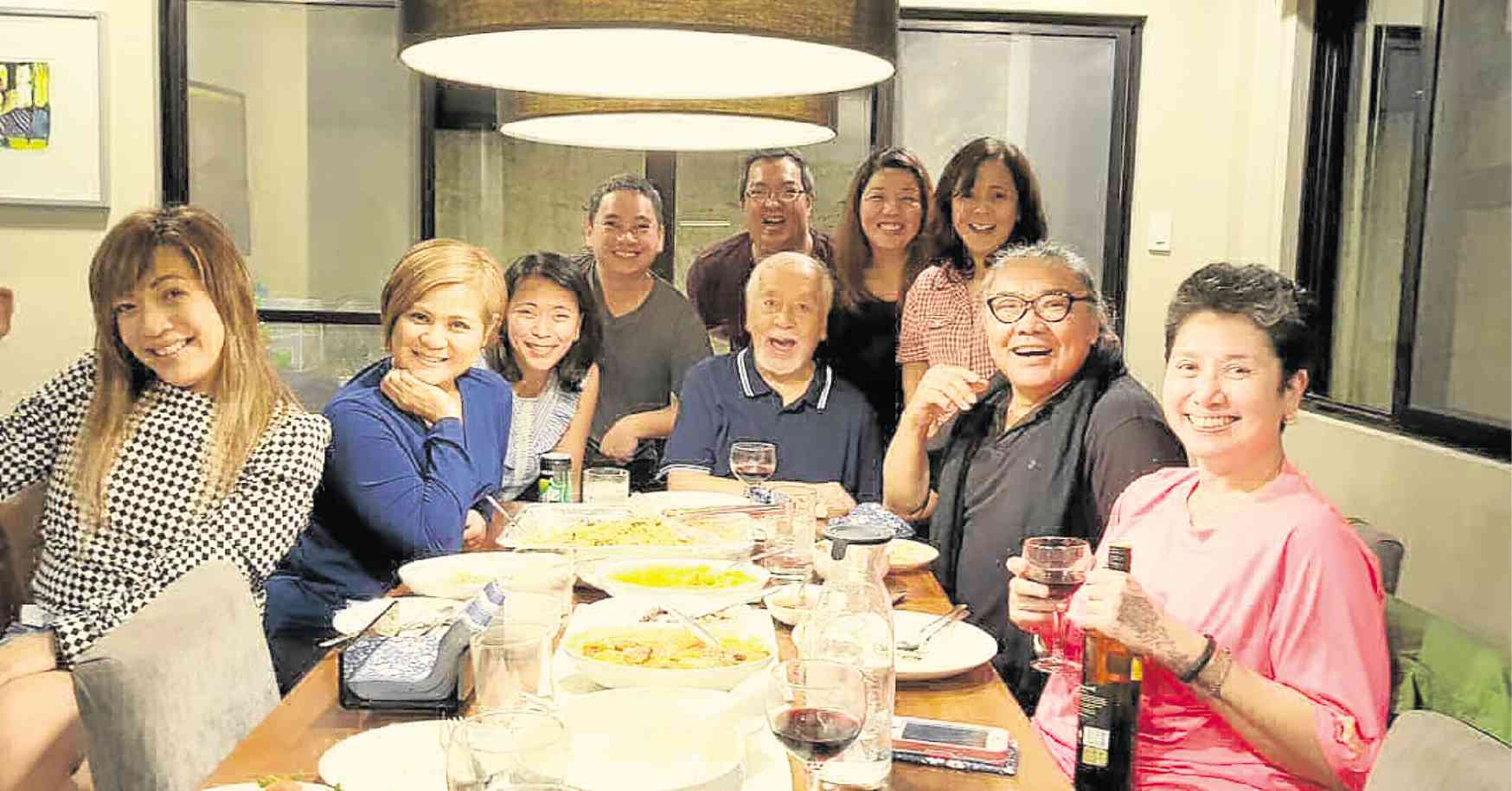 Philippine theater maverick, director, professor, and TV and film actor Tony Mabesa had wanted to stop celebrating birthdays after his grand 80th in 2015, which was masterminded by students and theater “babies” at Dulaang UP.

The problem is, his many friends, specifically the dozens of theater stalwarts he has mentored and inspired through the years, just won’t let him forget.

There was lunch with former colleague and retired University of the Philippines (UP) theater arts professor Amiel Leonardia, now based in Canada and here on a visit, held at the UP Town Center.

It was organized by former theater arts students and now seasoned actresses Candy Pangilinan and Frances Makil-Ignacio. Balikbayan Dulaang UP baby Ada Bautista, a film producer now based in Paris, was also home for the festivities.

On the day itself, a Saturday, other protégés including Jacques Borlaza, Paul Morales, Geraldine Villamin and Adriana Agcaoili celebrated with “Sir Tony” for lunch, complete with birthday cake. That evening, Frances, Candy and other schoolmates got together for home-cooked fare and wine at the residence of lighting director Voltaire de Jesus, who cut his teeth lighting Dulaang UP productions.

Asked how he manages to stay sprightly and quick at 83, Mabesa replies with a chuckle, “Part of it is acting na lang. I feel it already, I’ve slowed down, but I’m very thankful for good genes. My mom lived to 89, my father until he was 93, and a sister is turning 90.”

Mabesa has stopped drinking beer and switched to wine, and quit smoking 20 years ago, although the image of the director, his booming voice giving instructions in the darkened Wilfrido Ma. Guerrero Theater, an overflowing ashtray on a table beside him, is one many students will never forget.

“Now, it’s everything in moderation—and a good doctor you trust. Mine is Dr. Nerissa Lacuna Alip at the UP Health Center.”

He’s also in bed by around 9:30 p.m., although he was up past his bedtime the night before this interview, having attended late director Maryo J. de los Reyes’ wake. Then he’s awake by about 7, and takes a regular breakfast of ponkan, banana, papaya, two sandwiches, and some decaffeinated  brewed coffee.

Mabesa, professor emeritus at UP’s Theater Arts department and founder of Dulaang UP, teaches one class a semester and directs one play a year, but admits he has definitely mellowed.

“I used to be a terror, they say. But working with young people also keeps me young.”

Also, for many years, until the death of his two beloved chow chows, Gabby and Chimra, Mabesa was a familiar sight around the UP oval, walking his beautiful dogs every day, an excellent form of exercise.

“They became Diliman icons, and people would ask to take pictures. I would ask, ‘Of me?’ And they would say, ‘No, sir, the dogs.’”

Even when dogs were no longer allowed around the oval, guards would respectfully leave Mabesa and the chows alone.

And then, there’s that creative mind. “I think what worked for me is, what I do is my passion. I was really into theater, and I still get excited about directing the next play.”

Mabesa doesn’t watch TV, opting instead to read books, especially biographies and autobiographies; he is excited to dig into Leonardia’s pasalubong, “Dropped Names: Famous Men and Women as I Knew Them,” actor Frank Langella’s juicy memoirs.

“In the final analysis, it’s about family, and keeping a small circle of friends,” Mabesa says, still oozing with elegance, immaculately groomed, and walking with excellent posture. “So many seniors are just sitting down and watching TV. Get out of the house, keep healthy, and always stay open to new possibilities.”

So where’s dinner for the 84th, Sir Tony?