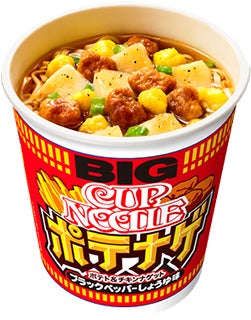 The staple food of the thrifty in Japan has gained a new flavor when Nissin introduced cup noodles with chicken nuggets and french fries.

The company calls its latest creation the “Cup Noodle Potenage Big.” According to a company statement via SoraNews24, “potenage” comes from the combination of “potato” (for french fries) and “nage,” the Japanese word for nuggets.

They meant for the potenage cup noodle to evoke the memory of eating french fries.

For the rest of the ingredients, it comes with scrambled egg, green onions and a soy sauce-based broth with black pepper.

The company also released an unusual pizza-flavored cup noodle back in November 2017. However, it may not be as good a breakfast meal as real pizza. Alfred Bayle/JB