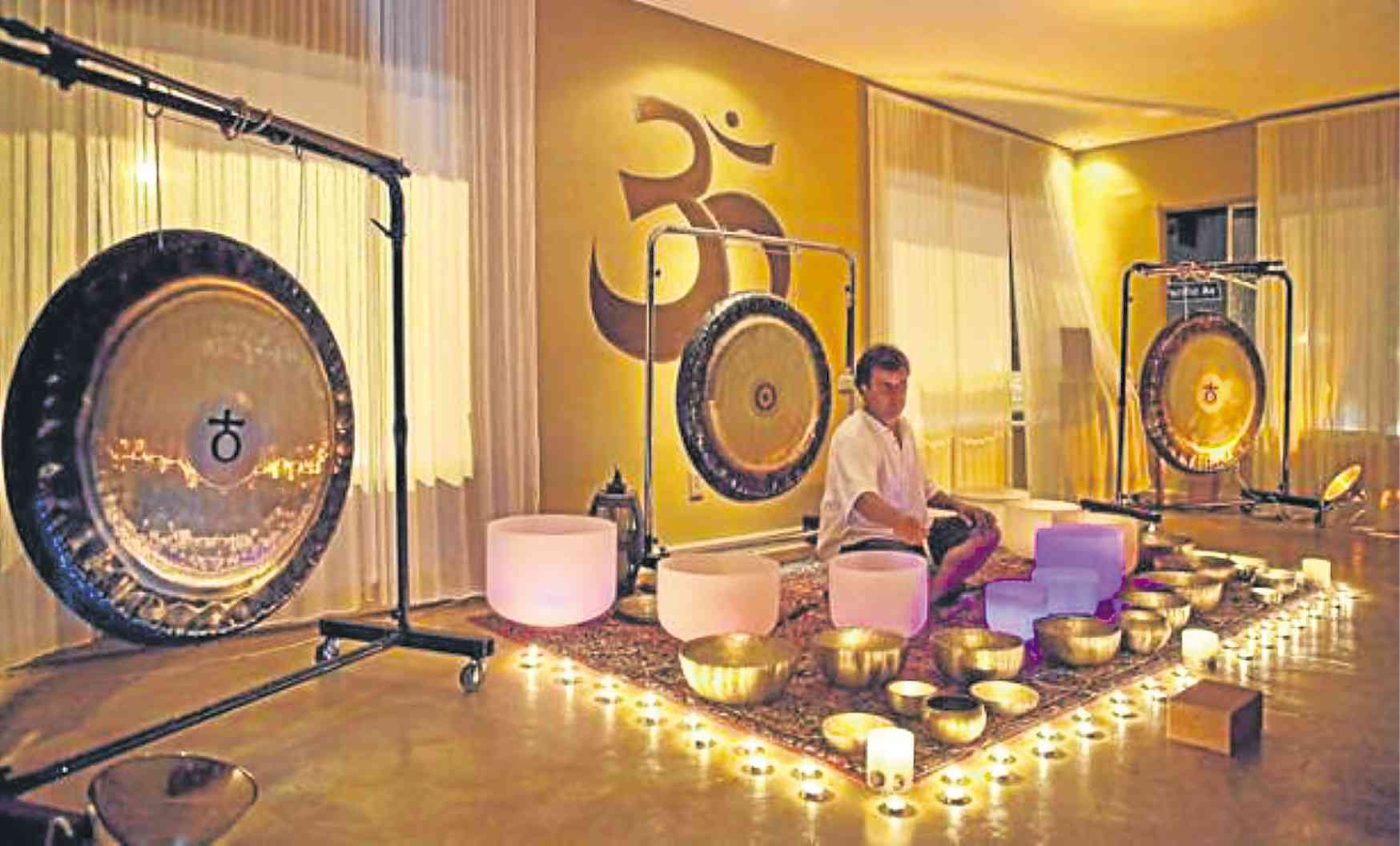 In a gong bath, participants are bathed in sound waves. —PHOTO FROM IAMHEALING.US

‘Spaholics’ are abuzz about gong baths

A new trend in relaxation has been making waves in the spa world.

Gong bath, also known as gong meditation or gong sound healing, is a buzzword among “spaholics” seeking to induce deep relaxation as a way to achieve wellness.

As the treatment’s name suggests, gong bath does not entail soaking in a tub or pool. Instead, participants are bathed in sound waves. The vibration of sounds and frequency emitted by gongs are said to help reduce anxiety and stress, and release repressed emotions.

This method of meditation has been used for thousands of years as a way of healing and lately has found a niche among spa and meditation enthusiasts.

I had the chance to immerse in this one-of-a-kind experience during a trip to Los Angeles with my sister and a friend. We looked up this gong person aptly named Guy and booked a private session in his studio.

We were asked to lie down on yoga mats, put on an eye mask, and just listen to the gongs. Since this was my first time to try a gong bath, I’m not ashamed to confess that I peeked to get a feel of what was going on.

As soon as Guy struck the gong, an eerie sound enveloped the place. It felt a little weird at first as the gong reverberated. But soon, I felt I was being transported to a deep state of relaxation.

The sound shifted in pitch, as there were many different sized gongs in the studio, along with Tibetan bowls, rain sticks and various sound producing instruments.

The symphonic rhythm indeed had a calming effect. It had the ability to induce a spontaneous meditative state. I was trying to hold back and not get carried away with the sensation as I wanted to make sense of what was happening.

I knew I was not in a state of deep sleep, but my sister told me afterwards that she heard me snoring lightly.

Midway through the session, it felt as though my arms were floating in the air. Maybe this is what they call an out-of-body experience.

There were two main types of gongs used—suspended and resting. Suspended or planet gongs are tuned to specific frequencies, while resting gongs or Tibetan bowls produce a sound similar to a bell.

Different volumes and rhythms induce different effects. The intricate web of reverberation quiets the mind, allowing a profound relaxation during which self-healing is most likely to occur.

While there is limited scientific research on gong baths or sound healing, more and more studies are shedding light on its benefits and the relation of sound to wellbeing.

A typical session ranges from 45 minutes to an hour, and the effects can last through the night and over several days.

After the session, my friend Melody described it as deeply relaxing. It lulled her to a deep sleep in just a short time and she awoke with a profound sense of calm.

My sister Emma also had an out-of-body experience as she felt her whole body becoming so light, it felt like it was lifted off the ground. —CONTRIBUTED

PHOTOCAP Sound healing- I Am Healing Photo taken from the web (iamhealing.us)