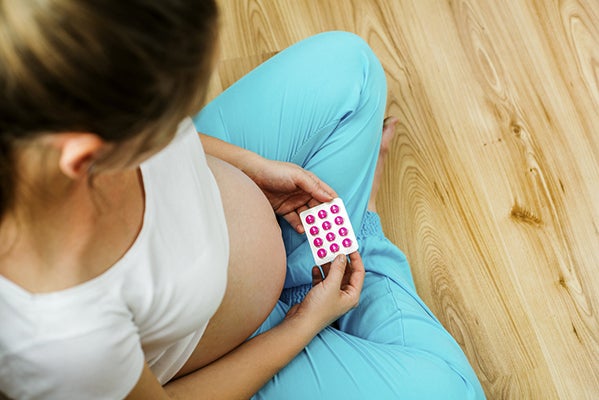 Antibiotics during pregnancy could increase a child’s risk of infection

New Australian research has found that taking antibiotics while pregnant can increase a child’s risk of infection and hospitalization.

Carried out by the Murdoch Children’s Research Institute (MCRI) in collaboration with Aarhus University of Denmark, the large-scale study looked at data from more than 750,000 pregnancies from 1997 to 2009 in Denmark.

After following the children from birth up to 14 years of age, the team found that those whose mothers had taken antibiotics while pregnant had up to a 20 percent higher risk of hospitalization from infection than children of mothers who hadn’t taken the medication.

In addition, when babies were born vaginally to mothers prescribed antibiotics in pregnancy, they also had a higher risk of infection risk than those born by caesarean section. The team believe that this increased risk is related to the influence of the gut microbiome; a vaginally born baby gets its microbiome from the mother’s gut and birth canal, which could be affected by antibiotics, whereas a baby born by caesarean section acquires its microbiome from the mother’s skin and the hospital environment.

The researchers also found that children born to mothers who were given antibiotics before becoming pregnant also had an increased risk of infection, suggesting that other shared factors (ex. genes and the home environment) may also contribute to infection risk in both mother and child.

Lead author Dr. Jessica Miller explained that infections during pregnancy are common and need to be treated appropriately, although she added, “We do however need to use antibiotics sensibly in all age groups, including pregnant women because they do decrease ‘good’ bacteria in the gut microbiome. A healthy microbiome is important early in life for the developing immune system and possibly for preventing serious infection.”

The World Health Organization (WHO) is also encouraging everyone, not only pregnant women, to think about their antibiotic use as antibiotic resistance becomes one of the biggest threats to global health. Antibiotic Awareness Week is held each year in November, with many resources also available on the website for how we can use antibiotics more carefully.

The results can be found in the International Journal of Epidemiology. JB

Were microblading and vaginal rejuvenation the hottest medical spa trends of 2017?