In ‘‘night, Mother,’ a battle between life and death in real time | Inquirer Lifestyle ❮ ❯ 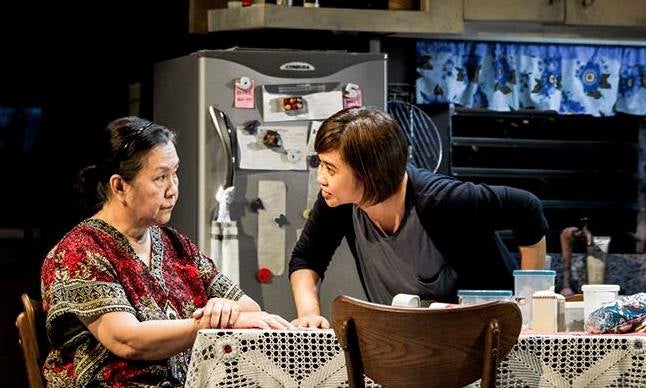 In ‘‘night, Mother,’ a battle between life and death in real time

I think it’s important to note that before you enter the theater to watch Philippine Educational Theater Association’s (Peta) “‘night, Mother,” the ushers remind you that the play would run for an hour and 24 minutes without intermission, and that mobile phones should be switched off or remain silent throughout the performance.

You are reminded again once seated—because “‘night, Mother” is a two-woman play that will drag you through various emotions on its tight running time.

The play is one long negotiation played out in real time between mother and daughter, where the stakes are life and death. It opens innocently enough, with Thelma and her daughter Jessie preparing for their evening activities. But when Jessie reveals that she is planning to kill herself before the night ends, it sparks an intense exchange on why one must live—or choose to kill one’s self, for that matter.

This is a play with no easy answers. It is a constant struggle interrupted by Jessie leaving instructions on what to do after she has killed herself, and director Melvin Lee’s slow build-up of the various emotions that come from this sort of situation.

It first comes off as flippant. It’s serious enough for Thelma to discuss with Jessie, but it doesn’t come off strong. Lee’s direction of Sherry Lara and Eugene Domingo’s performances is like throwing a stone in the ocean. It begins as ripples, but as it gets closer to shore, it becomes massive waves.

The theatrics are kept to a minimum. The set doesn’t change, though it lives and breathes with a working kitchen and a clear sense of space. The lighting shifts and changes according to the mood and without any indication as to the changes in light source, while the music comes in just faintly behind the pensive and somber moments.

Everything about this play is focused on the two performances, and the relationship between mother and daughter.

“‘night, Mother” is about why Jessie would want to kill herself, and to make sure her mother understands why. It’s also about Thelma using every trick in her arsenal to keep her daughter alive.

Lara is a formidable presence onstage with her whole character’s history in plain view for the audience to see. But there is no attempt to connect to the audience. It’s just her and Jessie, and it strengthens the play and makes it so much more real.

Without any attempt to soften Jessie, Domingo is completely unrecognizable. One may have become accustomed to her punch lines and larger-than-life portrayals, but Domingo’s Jessie is somber and almost just ready to explode but never quite reaches it. It would have been a perfect performance—except there are moments she would say her lines to the audience, breaking this intense negotiation between mother and daughter, between life and death.

In a play so intimate and personal, without the use of microphones and before a captivated audience, the performances would have been enhanced if both actors were just completely dealing with each other. But those moments are lost during some of Jessie’s parts, with Domingo addressing these lines to her audience. It’s the only flaw in her performance.

Ian Lomongo’s adaptation of Marsha Norman’s 1983 play is brilliantly executed. It finds the space to Filipinize the story and make it current. Without ever moralizing or showing off its modern-day relevance, the play manages to force us to deal with suicide and mental health, while also making asides about how horrible the world is today—yet never taking us away from a personal story between one particular mom and her one particularly troubled daughter.

Everything in this production, from the direction to the adaptation and the performances, makes no judgments of the characters. When the play ends, we are left with nothing but feelings we must confront, and a desire to find answers for ourselves. And that is more than what any play can hope to accomplish when the lights go out. —CONTRIBUTED