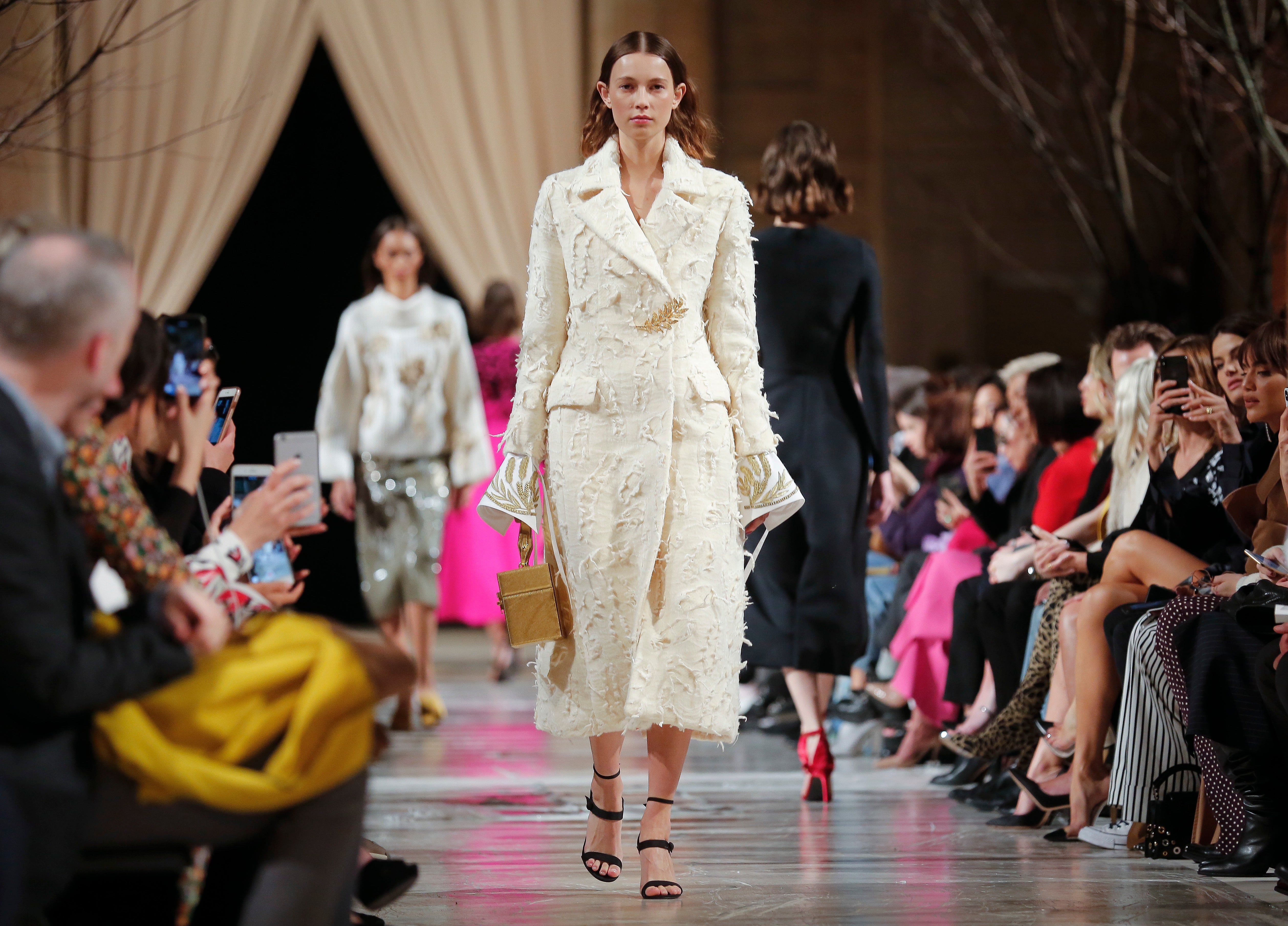 Carolina Herrera has represented refined, elegant glamour for decades, so it was fitting that she invoked classic styles as she delivered her final New York Fashion Week collection as the designer of her self-titled line.

Monday’s event was held in an event space at the Museum of Modern Art — a fitting venue, given Herrera’s outsized contributions to contemporary fashion over her decades as a designer.

But her collection was timeless — not something that could be relegated to one era. In front of a crowd that included Karlie Kloss, Katie Holmes, Seth Meyers, Anna Wintour, Fran Lebowitz, Andre Leon Talley and fellow designer Calvin Klein, Herrera presented a collection that was both playful and conservative, bold and understated, colorful and muted — meaning she used her last show to feature the depth and versatility of her clothes.

The show, which had a retro jazz soundtrack heavy on Ella Fitzgerald, started out with the basics — a white top with flowing sleeves and black wide-legged pants; a long, billowing black coat; a white coat with a flash of leopard fur on the sleeves. It then segued into more glamorous fare — dresses that could be worn to a formal function, and those clearly designed for a red carpet, with bright pops of color, including heavy doses of pink. There was a pink tuxedo outfit, a magical tulle pink and blue dress, and a black dress completely embellished with feathers that seemed to dance along with the music.

There were also several outfits that mimicked the designer’s own signature look — a crisp white collared shirt, coupled with a bold belt and equally bold colorful A-line skirts.

Herrera, who didn’t speak to the press at the event, has said that she is stepping down as creative director of the line after Monday’s show. Wes Gordon will take over, while Herrera will take on the title of global brand ambassador.

She made sure to share the spotlight as she took her final bow, bringing to the runway about two dozen of her seamstresses. Then, after receiving a bouquet of red flowers, she was embraced by Klein and others, congratulating her on her final flourish, and perhaps on her next chapter.

“Well, it’s a bit bittersweet because I just absolutely adore Mrs. Herrera and she herself will be missed in the atelier everyday,” said Kloss, one of the faces of the Herrera line. “But her spirit and her timeless style is going to live on forever.”

At Oscar de la Renta, the storied label that epitomizes luxury and refinement, designer Laura Kim has a new motto for her clients: “You’re not dressing up for your mothers anymore.”

Kim and her design partner, Fernando Garcia, are taking the company into the future with skill and craftsmanship (and great fabrics), but also with the view that fashion’s rules have changed forever. Or, as Garcia puts it: “There ARE no more rules.”

This means that for evening, an outfit can be both grand and casual at the same time. Many of the evening looks Kim and Garcia presented on Monday at their runway show epitomized this idea — for example, a long glittering skirt with embroidered sequins, perhaps in a ballgown shape, but topped with a simple sweater or very light top.

“You can wear a T-shirt to an evening event,” Kim said in an interview after the show, “if you can pull it together nicely. I just think there are so many more options to show your creative arc. For us, it’s great. It’s a fun time.” She herself was wearing a tulle T-shirt that could move easily from day to evening.

The designers said their collection was inspired by a memory: A 2014 trip to the Cloisters, the upper Manhattan museum specializing in European medieval art and architecture. Their host: None other than de la Renta himself. (The legendary designer died that same year.)

Memories of that trip got Kim and Garcia looking at Elizabethan embroidery, and they were drawn to a tree-branch pattern that now appears on much of their new collection — for both daytime and evening looks. “It just had this perfect amount of contrast,” Garcia said.

Both designers said they were partial to a particular garment: An evening coat in filmy tulle, which appeared in the show in several colors, including black of course. It was a lighter take on the formal evening coat that de la Renta used to do it shiny satin. But it still retained the essence of those earlier garments.

“I think Oscar would have loved that coat,” Kim said.

As the Olympic outfitter of Team USA, Lauren’s job is done in South Korea, so where to go next?

Under gloomy skies and intermittent sprinkles in New York, he headed for his Jamaica retreat in Montego Bay as inspiration for spring and summer collections for both men and women.

The clothes couldn’t have screamed Jamaica louder. They were nautical. They included the yellows and greens of the island country’s flag and regatta pennants, along with pops of red and blue in bold graphic designs. There were yachts on wide ties and, well, kind of all over.

And, as always, there was Ralph Lauren himself on the runway for his end-of-show walk and wave to guests that included Hilary Swank, Katie Holmes, Rosie Huntington-Whiteley and Rachel Brosnahan.

“Everyone wishes for a magical place where they can step out of time and into the beauty of nature,” Lauren said in show notes. “I wanted to share the mood, the light, the blue and white freshness of my retreat in Jamaica.”

The brand said all of this in crisp cottons and silks, stripes and tie dye. There were patent leather shorts and jackets worthy of a tropical downpour or afternoon deckside. There were also predictable whites in lightweight suiting for men and women, along with some evening looks for the latter.

And they didn’t forget the jaunty caps and deck mocs, either.

Marvel Studios sponsored a small “Black Panther”-inspired presentation, “Welcome to Wakanda,” on Monday featuring designs by LaQuan Smith, Chromat, Wale Oyejide of the brand Ikire Jones, Fear of God and others, including the jewelry of Douriean Fletcher in a capsule collection.

Among Fletcher’s work in the highly anticipated film that opens Friday is a bold amethyst and 18-karat gold plate piece at the top of a costume worn by Angela Bassett’s Queen Ramonda. It’s featured in one of the movie’s posters. Fletcher also hand pounded gold-plate armor pieces for the female warriors of the Dora Milaje.

“I wanted it to resonate with the idea of female empowerment, women that are strong,” he said. “I wanted to do something that was sexy and powerful and aggressive because there’s a lot of technology in the film.”

Oyejide did a men’s suit with a coat and scarf. One of his scarves made it into the movie, which he said shows off the nuances of people of color.

“The film is very much about the joy of seeing cultures represented in roles that they are generally not seen in,” he said. “There’s villainy and heroes, tech genius and romance. People of color are generally presented as a monolithic image. I’m hoping it smashes the door open to show that people can occupy all these spaces.”

Cushnie et Ochs, Sophie Theallet and TOME were the other brands invited to participate. Like Fletcher, footwear designer Aurora James was asked to produce a small capsule collection. MKH