For the deaf, Rio samba parades are all about the vibes | Lifestyle.INQ ❮ ❯ 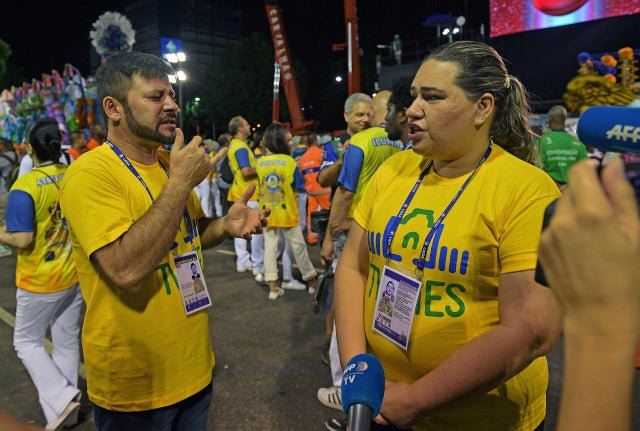 Aulio Nobrega (L) and Daniela Abreu use sign language to communicate during the second night of Rio's Carnival at the Sambadrome in Rio de Janeiro. Image: Carl DE SOUZA / AFP

For the deaf, Rio samba parades are all about the vibes

Aulio Nobrega can’t hear a thing when hundreds of drummers march into Rio de Janeiro’s Sambodromo, or when thousands sing or the crowd cheers.

But he feels the vibe — literally.

Nobrega, 40, works as a journalist for TV INES — a channel aimed at deaf people, where the correspondents report in sign language — and his challenge Monday night was to cover samba parades famous for their decibel levels.

Before every parade, the noise onslaught starts with fireworks announcing the new samba school. It sounds like a battle.

Next the drum section fires up, hundreds of drummers working in unison. Then come some 3,000 costumed dancers singing the school’s anthem, which simultaneously belts out from loudspeakers.

And that’s before you factor in the cheering and singing of 72,000 fans crammed into the narrow stadium.

The whole drama passes in silence for Nobrega, yet somehow needs to be described to his equally deaf viewers.

And that’s where the vibrations come in.

Nobrega says the music doesn’t have to reach his ears: it courses through his entire body.

“I hear none of the music, really nothing, but I feel the vibrations. It’s as if there’s a force that I feel on my skin,” he said, speaking in sign language through one of TV INES’s hearing-capable interpreters.

Brazil has a long way to go in providing adequate help to the hearing impaired, said Daniela Abreu, who can hear but learned sign language from her deaf parents and works as a TV INES interpreter.

For example, public institutions like the police do not provide access to a signer. “You have to bring your own,” said Abreu, 35.

“Text only works if you have enough education. My mother, for example, can’t read well enough,” Abreu said. “People like that are pushed to the margins of society.”

TV INES started five years ago in hopes of reaching the forgotten.

Its videos currently get around 10,000-13,000 individual views, with traffic rising steadily among Brazil’s estimated 10 million deaf people, organizers say. This was its first coverage of the Sambodromo festival.

“It’s important for society to understand there is this diversity,” Nobrega said.

As he spoke, the Unidos da Tijuca samba school swung into action for its parade down the Sambodromo piste: first the fireworks, then the drums.

For anyone unable to use sign language, attempting to talk had become useless.

It was time for the deaf correspondent and his camera team to go catch some samba vibes. NVG

Brazilian women say ‘No Means No’ at carnival

WATCH: Trailer for ‘This Close’, series about deaf best friends, written by and starring deaf people