Why these ‘Kulasas’ love our reunions | Lifestyle.INQ ❮ ❯ 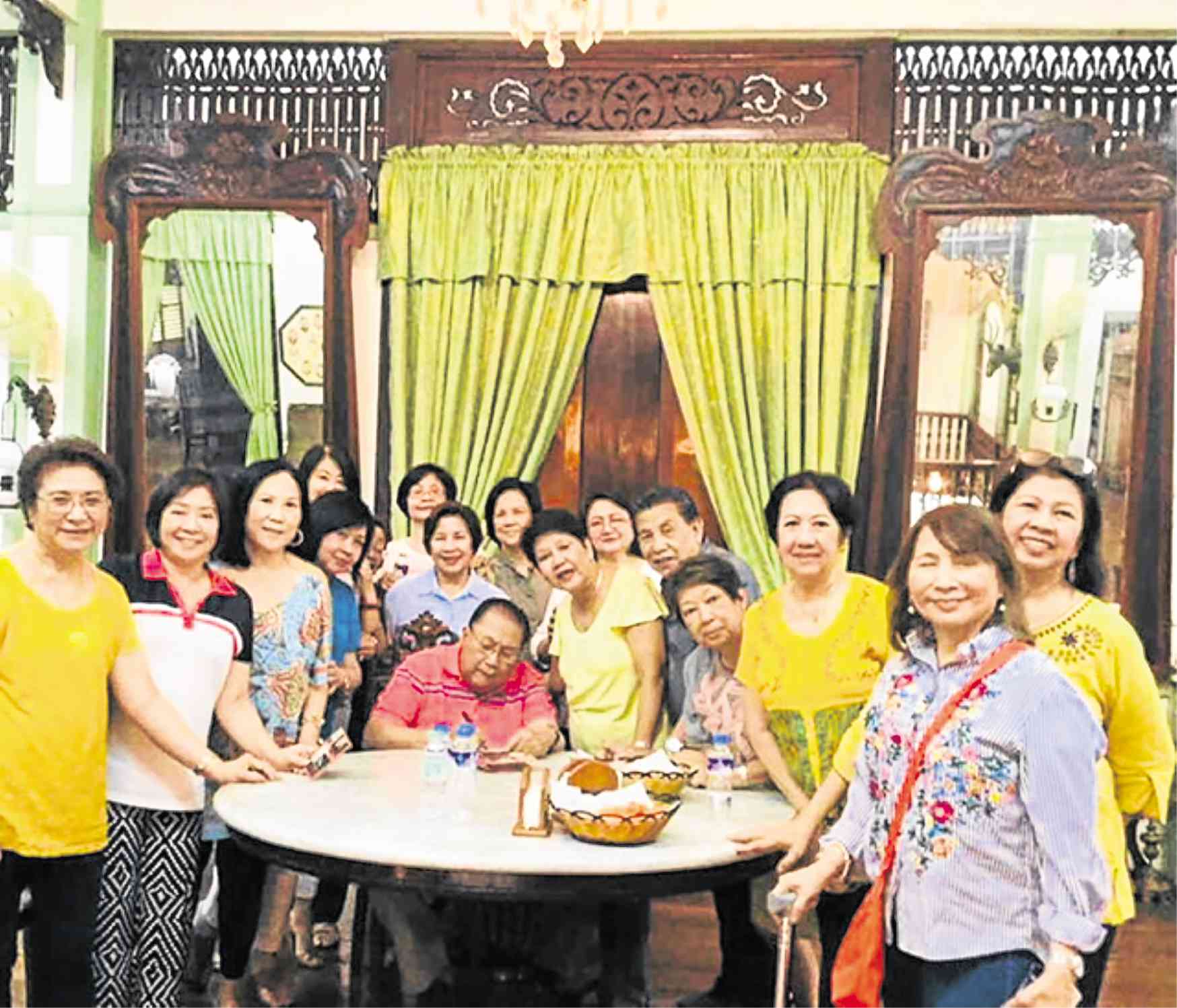 With lawyer Tony Pastor (seated, center) at his ancestral home

Why these ‘Kulasas’ love our reunions

My Scholastican schoolmates (GS ’59, HS ’63, College ’67) had vowed we would keep on traveling near and far, for as long as our legs could carry us—and with what we anticipated may be a limited time left, we did so with such a frenzy this past year.

First, a confession. Our class batches from St. Scholastica’s College are notorious for being avid performers in the traditional February homecoming days. We like getting together, so much so that my daughter Aina, a “Kulasa” (as the Scholastican is called in the vernacular) herself,  asked me, “Why is it that every year, your class seems to make a big fuss about performing at St. Cecilia’s?”

The silver, ruby, golden years are understandably significant, but we celebrated our pearl and sapphire. We were also the class that did a Sweet 60 senior citizen joint debut at  Manila Polo Club.

We eschew the usual Broadway favorites in homecoming programs, confident that our resident creatives Elsa Lava Mapua, Paulynn Paredes Sicam and Yvette Jarencio would whip up something original.

We like making a fuss over our class anniversaries because we know we have much to celebrate. It is also a special time when we rediscover and strengthen the bonds of friendship that endure through the decades. In the last homecoming, we were the College Goldies herded by Ana Quintos Sy-Quia, and came close to being the most senior and the most physically able among the older classes presented.

The first planned trip for a group of 10 was to an idyllic place, an almost spiritual retreat to Luang Prabang in Laos, a World Heritage site, except that we were far from reverential. An Australian owner of a high fashion store asked me when I walked in, “Are you part of a company of women travelers?” He knew because he heard the laughter two blocks down.

There were nature trails and temples and museums to explore, but many were more comfortable gathered under the trees on temple grounds, exchanging stories. Our hotel was right on the street that was transformed into the daily night market, with the loveliest handwoven shawls, handmade embroidered shoes for children, and coffee spoons crafted from ammunition remnants. At the crack of dawn, one witnessed the procession of Buddhist monks with their begging bowls.

The coming of summer meant more trips upon the invitation of three college classmates. Lettie Bihis, probably the naughtiest among us, wanted to host us in her lovely Santorini-inspired Tagaytay home on a hill, which she had built after her retirement as a successful realtor in New York. It was a spacious home that housed 13 of us. The two-night visit allowed us a trip to nearby Batangas City for a tertulia with the Pastor brothers, lawyer Tony and Pitoy, in their 134-year-old ancestral home.

The return to Lipa, Batangas, the next day was to the rustic farmhouse with five-star amenities of another classmate, Leeia Lopez Mercado, whose husband, Joe, is a very successful coffee farmer. What pride we felt basking in the success of the Mercados’ Café de Lipa brand. It was a designer home to retire in, right in the midst of their large coffee farm.

Another summer highlight was upon the invitation of another classmate, Belle Ventenilla Arcinue, to Pangasinan.  Belle is a heritage advocate impassioned with local history and the restoration of vintage buildings, especially the Casa Real. She is also first lady of Sual, where her husband Bing is the current mayor. Belle introduced us to bangus culture, the hydroelectric power plant in Sual, and buildings showcasing the architecture of past decades, including one designed by Daniel Burnham himself.

Through all these and the numerous lunches that followed, with turning 70 as the current new excuse, one appreciated not only the masterful planning and logistics necessary—where pickup points would be with Manila traffic as a major consideration, who would room with whom, a rented van or a convoy of cars, who would bring what dish, a pooled petty cash fund.

One also had to appreciate the openness and flexibility of hosts and guests, the warmth and the comfortable company where no one had to hide nor prove anything—something that only shared years on the Leon Guinto campus could make possible.

There is much to celebrate in each of our lives. Kookie Linatoc Faylona marked 50 years of marriage to Romy in a ceremony in wintry Winnipeg officiated by their priest son, Father Joey. Yvette Jarencio immediately remarked in awe, “From prom date to 50 years.  Wow!” How blessed that we also have another priest in our midst, Fr. Gabby Lamug Nañawa, son of Linda and Armand, who heads the Jesuit mission in Cambodia.

SF-based Janet Lahoz Timbol writes in her New Year message to the class, “I know that we’ve had our own unique challenges through the years, and I can also see your strength and courage for having come this far in our journeys.”

And occasionally, should sensibilities be offended and feathers ruffled, one is always confident that in time, in a very short while, things would be the same again.

Our story does not end here; it continues, for as long as the class spirit throbs.

Sorry to have disappointed my daughter Aina again for last week, it was my high school class celebrating our emerald jubilee in the annual homecoming—Vida Esmeraldas, headed by Mila Magpayo Medina. It has taken us some time to figure out that emerald means 55 years. Who bothers to celebrate that but us?

The year’s travel destination is India, with countless reunions right before and after, while an itinerary takes shape. —CONTRIBUTED