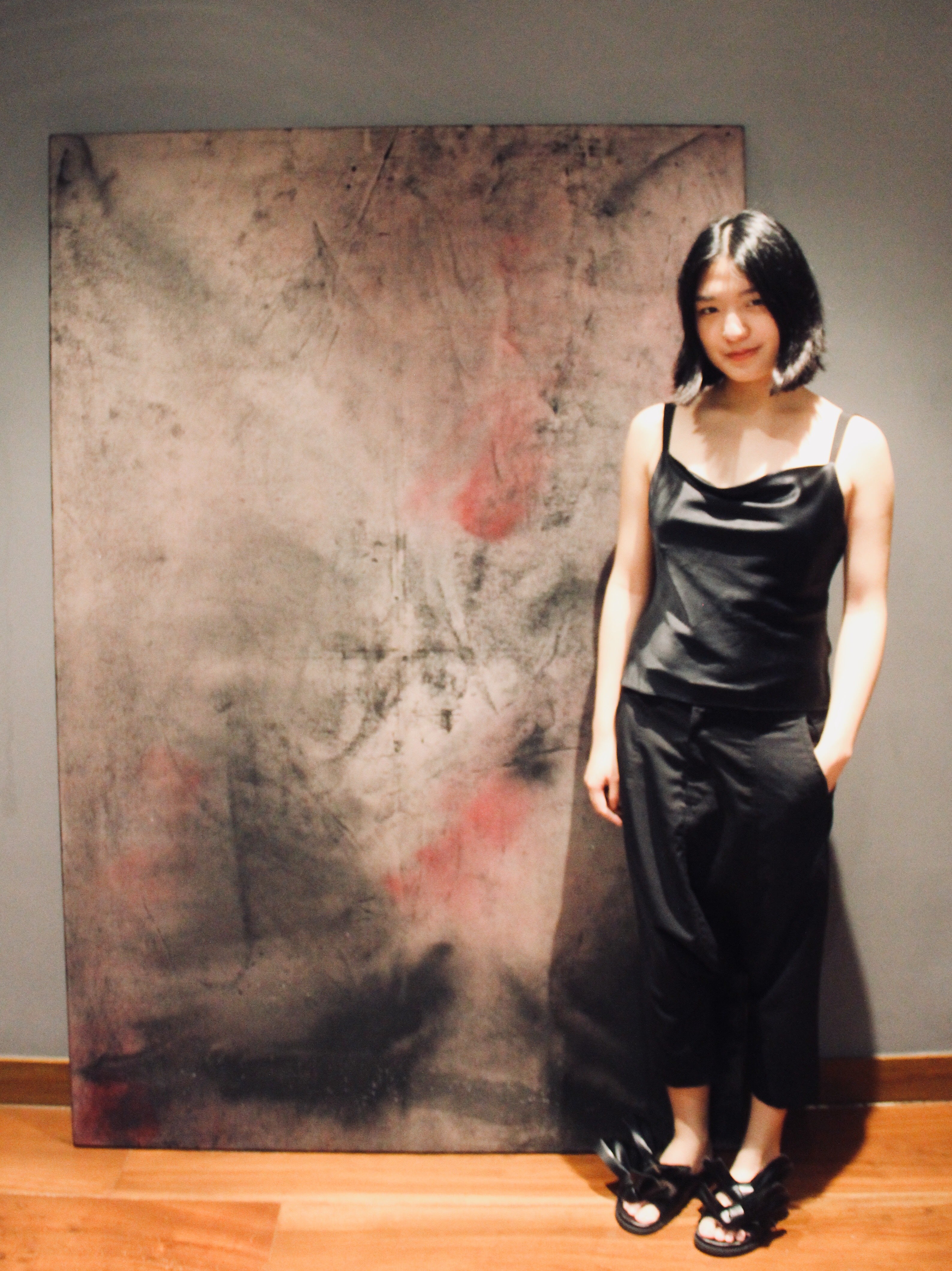 Christina Lopez before her work, “One Day I’ll Be Someone Else”

Christina Lopez said she had second thoughts about going to Hong Kong for her upcoming solo art exhibit, fearing she had not done a good job.

Her achievements in a span of less than a year, however, belie her apprehension: a residency in the Royal College of Art in London and her participation in the exhibit “Proclamation of 8.”

Tona, as she’s known to her friends, might just be suffering from preshow jitters. Artists, after all, are known to be self-critical.

Her exhibit, “By Blood,” to be held on Feb. 20 at the Naked Hub Gallery in Hong Kong, is a celebration of her identity. The 22-year-old multimedia arts student said, “I wanted to show something from my heritage. It’s an exploration of race, religion, being a Filipino woman and saying that the personal is political.”

The Naked Hub Gallery is a space for up-and-coming artists. A dinner with a model friend based in Hong Kong led Tona to the gallery. “She asked if I wanted do a show in Hong Kong. So I sent my portfolio and they liked it.”

Curiously, the curators liked Tona’s politically charged work. “I think all that I do is political,” she pointed out. “Being a woman is political, being Catholic is political.”

Tona’s interest in art started when she was only 4 years old. “My uncle taught me,” she recalled. “He’s an art collector. Most of my knowledge about art theory and the local art scene came from him because I was not classically trained. I did not take art lessons and did not take up fine arts.”

Although she had art class in high school, she was not confident about her drawing skills. But her uncle encouraged her, “to practice the signature I would use on my paintings. It was instilled in me that I could paint.”

Eventually she started painting as a hobby, but never took it seriously until two years ago. Now she looks up to the French-American sculptor, painter and printmaker Louise Bourgeois as an inspiration.

She revealed that her college course, Human Biology at De La Salle University, was actually her parents’ choice. When she finally decided to study Multimedia Arts at De La Salle-College of Saint Benilde, her parents were not happy. “There was a struggle to get their approval. They thought painting was really just my hobby. But now they’re supportive.”

Wanting to “legitimize” her status as an artist, she went on to study Contemporary Art in Practice at Royal College of Art in London just last year. It was during her residency that she began focusing on a controversial subject: extrajudicial killings in President Duterte’s war on drugs.

She had mounted an installation of 7,000 pills filled with descriptions of drug war victims.

On a carpet-sized canvas is a quote from Duterte, but with a twist, “My God, I love drugs,” scrawled on the floor. This work is currently on display at the District Gallery in Quezon City.

Referring to the work, Tona recounted how “someone thought about freedom and recreational drug use.” She believes an artist should have an open mind as to how her work is perceived.

September last year, Tona joined “Proclamation of 8,” a group show by eight artists on life under the present administration. “I can’t write on a painting to say, ‘You should hate Duterte, you should hate Aquino.’ It’s like, ‘Hoy mag-isip naman kayo about this issue.’ That’s where change starts.”

Tona said artists are “shapers of culture who make stuff that might influence the next generation and reflect the times. When you’re doing work, it should start a conversation. I can’t tell them what to think, but I can tell them to think, period.”

Tona is attuned to the local contemporary art scene. She lamented that there’s too much business in it. “The challenge is to see it not as a job, but as space to grow and be creative. Sometimes we forget it’s not necessarily about getting up there.”

She believes that the country has much room to grow in art appreciation. “The government should fix the educational system so we can all appreciate art.”

Asked what advice she would give other young artists, she paused before saying, “Just keep creating things and don’t be afraid to start a conversation through your work.”