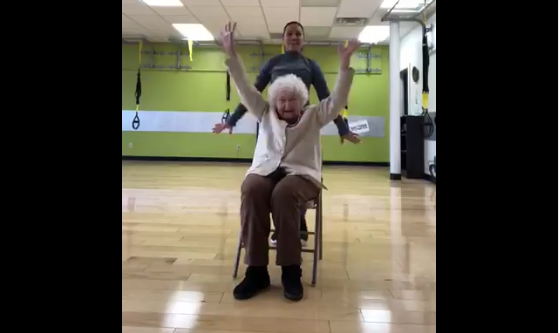 Too old to dance? That’s a blatant lie. Just take the case of 93-year-old Helene Miller from Pierre, South Dakota, who proves that you, too, can still put on your dancing shoes and wiggle your worries away, all to maintain a healthy lifestyle.

The video of Miller surfaced when Joana Zanin (@joana_zanin10) shared a video on Twitter last Feb. 14 of her mother training Miller at the gym. Her mother, Elizabeth Zanin, is a gym trainer at Anytime Fitness and has been training Miller three times a week for the past two years, according to Today.

“My mom trains this 93 year old and it’s the cutest ting ever,” wrote Zanin. “Her laugh and smile makes her young #blessed.”

My mom trains this 93 year old and it’s the cutest thing ever. Her laugh and smile makes her young #blessed pic.twitter.com/oeRWylrLV4

“Just watching her joy and hearing her laughter made me appreciate the little things in life,” Joana told Today. “So I wanted to share that with the world! When I don’t go (to the gym), I’m like a different person. It gives me something to look forward to.”

Indeed, Miller’s contagious laughter has captured the internet, as her video gained traction and went viral on social media. Netizens couldn’t help but be moved by Miller after watching the video, whose cheeky smiles and bursts of laughter prompted them to react and tweet well-wishes her way.

Ah, to be young at heart and so full of life. If you’re dreading the gym today, perhaps a little shimmy and wiggle would suffice and tick the box. Dancing shoes are optional. Cody Cepeda/JB