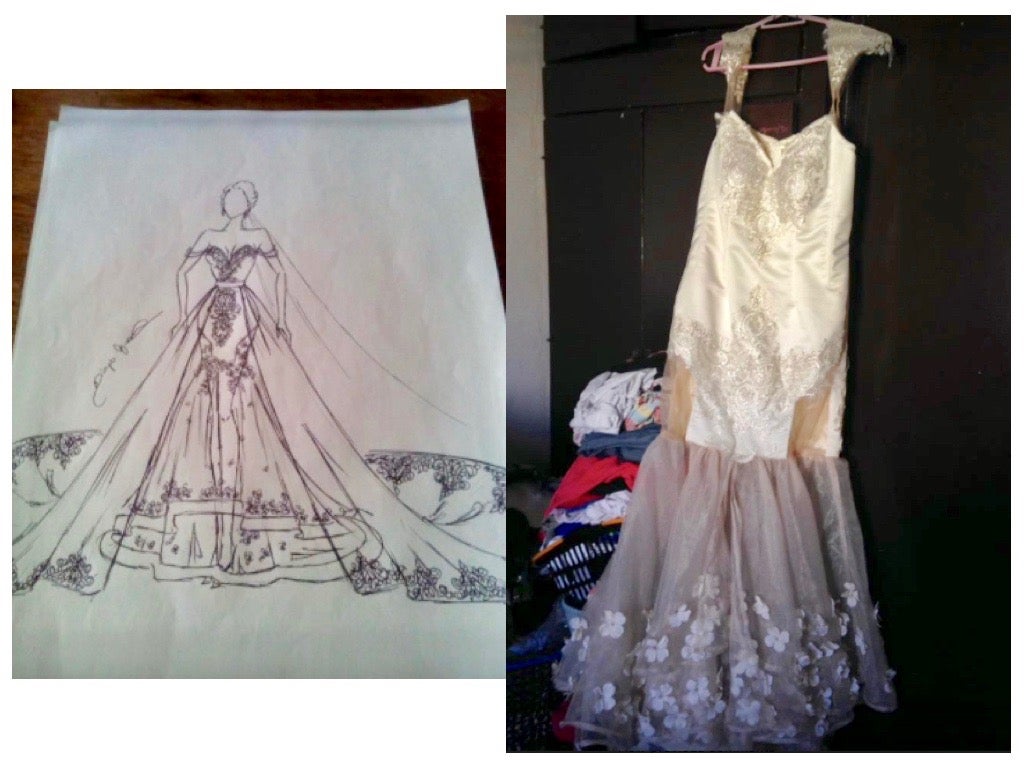 While weddings usually look perfect on the day itself, it takes a village and months and months of planning to get it all right. And sometimes, all the planning still doesn’t cut it, what with all the possible crises that can arise before and during the big day. For brides, the wedding gown is a major feature; any bride would want to look beautiful on her big day and with the perfect wedding gown to boot.

For Mhayo B. Arguelles of Parañaque City, Manila, however, choosing a designer friend proved to be a mistake.

Arguelles took to Facebook last Feb. 20 to share her disastrous experience on the making of her wedding gown. Arguelles said she had a wedding gown made by her unnamed designer friend that was worth P30,000. Unfortunately, the finished product did not meet the quality she expected for the amount agreed.

In one of Arguelles’ pictures, she showed the base gown of her friend’s creation. She pointed out that it was so different from the sketch the designer made that she was so disheartened.

Her wedding was last Feb. 14 during Valentine’s Day. Their first fitting was back in November, while the second was in January. Despite seeing the initial form of the gown, Arguelles said that she accepted it because she trusted the designer, and she believed that perhaps they might add some more details.

The wedding gown was delivered to her in Feb. 13, just a day before the wedding, and that was when Arguelles realized the gown was nowhere near her dream wedding gown. “Nanlumo ako pagkakita ko sa gown ko na ‘Haaaaa! ito yung wedding gown?’ Nagdalawang isip ako bakit ganto? ANG PANGET!”

(I felt depressed after seeing my gown, I said, “What? This is my wedding gown?” I thought twice and wondered how it could have turned this way. It’s ugly!)

Arguelles showed more pictures of the gown, pointing out that it was delivered in an eco bag instead of a box like how it should be. She also showed that the lace was too high and that her underwear could already be seen when she tried the gown on. Some of the stitchings were also faulty.

(The lace on the arm-part of the gown is loose. It didn’t fit my arm the right way.)

It was a good thing, then, that Arguelles’ maid of honor found a way to borrow a gown from someone else and lent it to Arguelles. This minimized the stress that she had already been feeling.

Arguelles told INQUIRER.net this morning that she only used the veil and the train of her designer friend’s gown because she had no other choice, it was already her wedding day.

(I was only able to use the train, because I had no other choice. I just did what I had to do to look as best I can with the gown I borrowed. The veil was also by my designer friend. There was no other veil I could use.)

It was noted too that her designer friend created her groomsmen’s outfits, charging her P1,500 each for the ten of them. However, Arguelles wrote that these were also a failure.

(The groomsmen’s outfits were delivered Feb. 12 at around 11 p.m. That’s wrong as well, because normally, there should be at least one week of final fitting before the wedding proper. I am wondering why you waited for the last minute before you delivered our clothes, while I gave you a long period to prepare.)

Arguelles also told INQUIRER.net that her groomsmen had to get their outfits repaired in a rush because they didn’t fit well; some were too baggy while the others had unflattering cuts.

(But I was still considerate of my friend. I still gave him work when I asked him to do the makeup of my bridesmaids. They were also not pleased with their makeup. Their P500-each was not worth it.)

(Even when worn by a mannequin or in whatever angle you look at it, it really has no appeal.)

Arguelles’ designer friend, however, has since filed a case in the baranggay because Arguelles refused to pay the P8,000 balance left of the P30,000. She told INQUIRER.net that she refused to pay the balance because of the designer’s unprofessionalism and due to the low quality of work; she wasn’t satisfied as a customer.

More than the issue of money, however, Arguelles expressed that her trust was betrayed because the designer was her friend.

Arguelles confirmed that she has filed a case herself, and she and the designer will face each other in Feb. 27. JB