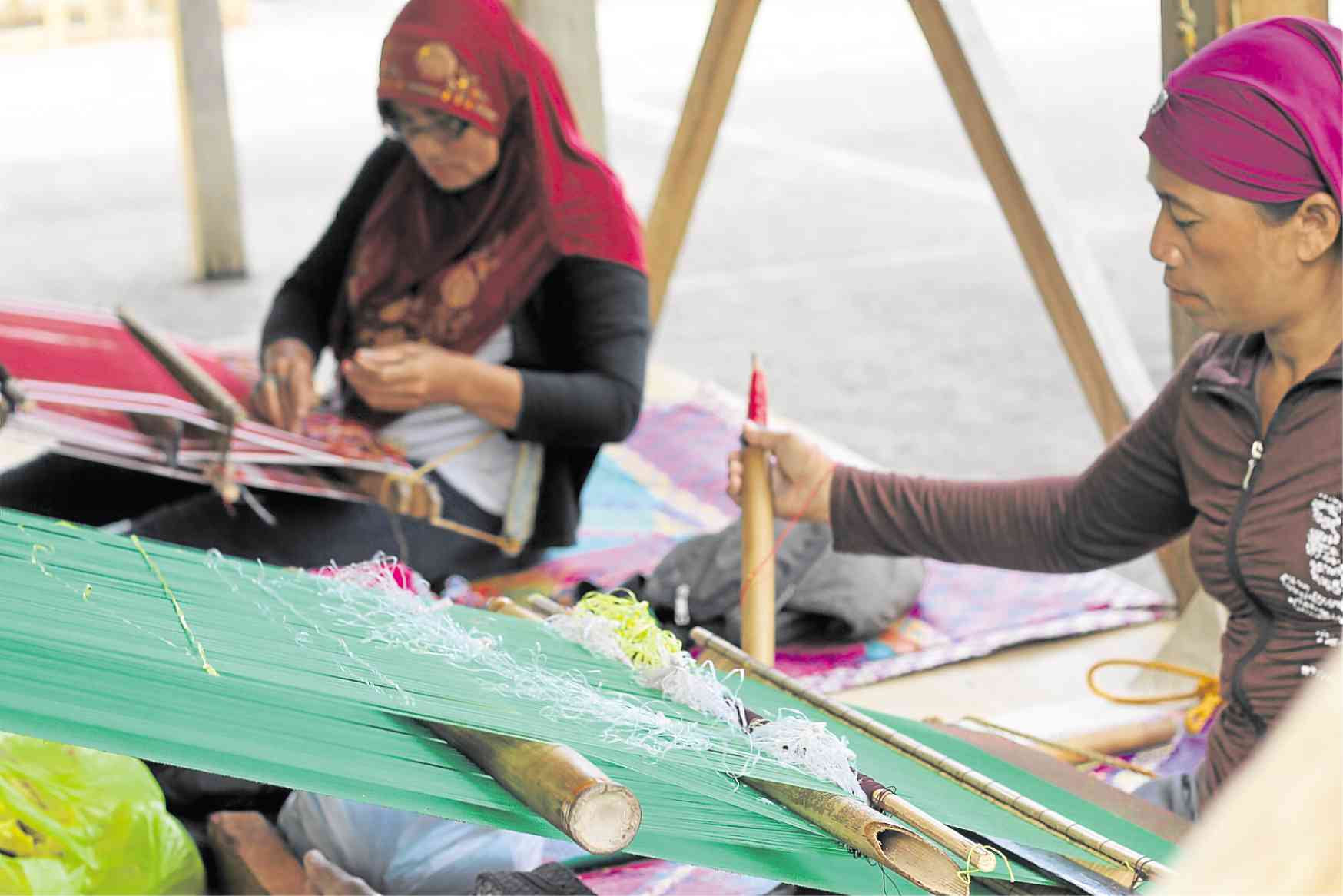 The Yakan appreciate the economic benefits of preserving their weaving tradition and tribal identity.

Fourth-generation Yakan weaver Evelinda Otong Hamja still makes the basics of the traditional costume called semmek—the sawal or pants, the saputangan or the headdress/apron, the pinalantupan or sash, and the pis or the headscarf.

Her eponymous shop, Tindahan ni Evelinda, is close to the Yakan Weaving Center along the National Highway, a must-see in Zamboanga City. Tourists have lauded the signature colorful geometric weaves of the Yakan, one of the 13 ethnolinguistic groups from Muslim Mindanao.

Sales are brisk during holidays. Off-season, Yakans are lucky to get a couple of customers a week. Some entrepreneurs buy either the fabrics or the souvenirs in bulk.

Evelinda, 44, spends four hours a day weaving Yakan textiles at home. She also built a miniloom for her 13-year-old daughter, Olivia, who produces coasters. Lately, she has been outsourcing Yakan fabrics from her relatives so she can sew them into souvenir items.

In other parts of the Philippines, weavers struggle to preserve their cultures despite poverty and exploitation. The Yakan appreciate the economic benefits of preserving their weaving tradition and tribal identity.

“People were growing coconuts to earn money. But when there was an epidemic in the trees, the Yakans could not subsist from it. Many women are reverting to weaving,” she says in Tagalog.

Weaving supported her education, and now her family. It augments the income of herhusband, Ollie Hamja, a policeman. The earnings from her shop have put her children to school.
Her son Oliver, 21, graduated in customs administration. Her daughter, Olivia, is the fifth-generation weaver whose coasters are sold at Evelinda’s shop.
Evelinda will also pass on the craft to 18-month-old Princess when she’s 7 years old.

Evelinda recalls stories from her grandfather about how the Yakan came from Basilan. The military skirmishes in the ’70s forced them to migrate to Zamboanga. Many settled in what is now called the Yakan Village.

Evelinda grew up in the boondocks, 15 km from Lamitan, Basilan. Her parents are typical Yakan. Her father, a farmer, cultivated root crops, bananas and vegetables. Like most Yakan women, her mother stayed at home to weave.
By osmosis, Evelinda picked up the skill. At 7 years old, she produced coasters, eventually graduating to table runners and fabrics.

In high school, she would stay at her grandfather’s house in Lamitan. On weekends, she returned to the farm to continue weaving. In college, she took up medical technology at the University of Zamboanga under a scholarship of the National Integrated Study Grant Program.

To work in a hospital, Evelinda needed to take an examination for accreditation. However, the P30,000 fee for the review in Manila, excluding board and lodging, was steep for the family. She learned from the Philippine Overseas Employment Agency that there was an opening for a medical technician in Saudi Arabia. The requirement was a college degree and no license. Hence, from 2001 to 2011, Evelinda worked at a dispensary in Caif.

While on holiday in Zamboanga, Evelinda observed some stores offering beautiful Muslim crafts. She then decided to resettle in Mindanao to continue the weaving tradition.

In 2011, she assembled her loom and commercial cotton threads and put up her shop.

The Yakan still use the primitive backstrap loom, which consists of different sticks and tangles of thread. Its design dates back to precolonial times. To begin weaving, the weaver dons the backstrap, which attaches her to the loom bar and tightens the warp.

In the past, weavers used pineapple, abaca and banana threads. However, Evelinda says that not even her grandmother taught her mother how to produce threads from plant fibers. Today, their scarcity has forced the weavers to use polyester-cotton threads. The backstrap loom generates a lower output compared to an electric loom. Depending on the pattern, it takes four to seven days to produce one meter of fabric at a price of P400.

The Yakan fabric is known for its traditional patterns. The pussuk labbung is the jagged pattern used in cloth baskets and holders for the kris. The bunga sama or rectangular forms follow the length of the table runners. The kabban buddi is a series of triangles, squares and angular shapes, commonly found on cushion covers, bed sheets, mats and traditional bamboo hats.
The baggang kettan is a mix of chiseled triangles and rectangles. The ukil lagbas combines waves and straight lines, often used for shirts, curtain drapes and boat sails.

While other artisans collaborate with nongovernment organizations and designers to make products for export, Evelinda says she can’t afford to go commercial. Nevertheless, she is realistic about her mission: to keep the weaving tradition alive.

“Not all indigenous groups in the Philippines have this craft. It’s my duty to save it from dying,” she says. –CONTRIBUTED