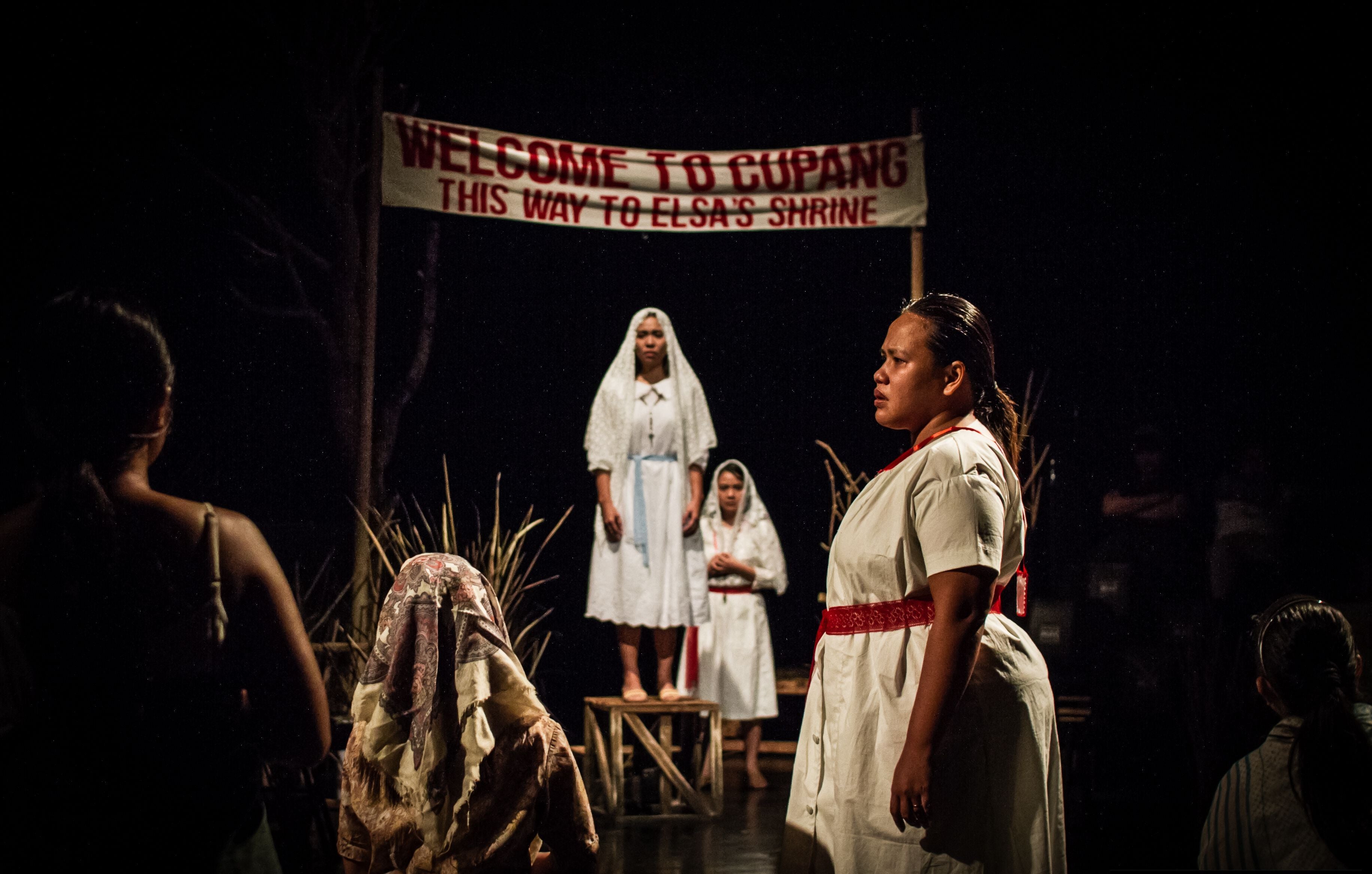 Bituin Escalante (right) as Aling Saling, Elsa’s mother: “Whether Aling Saling believes Elsa’s visions or not, she is always going to take Elsa’s side—she is that kind of mother.” —PHOTO BY ADRIAN BEGONIA

The everyday miracle of a mother’s love in ‘Himala, Isang Musikal’

Director Ed Lacson Jr. presents “Himala: Isang Musikal” as a “distilled version” of the musical based on the classic film by Ishmael Bernal. There is no orchestra, and props and choreography are minimal. He stages it with a few twig fences as scenery, a lone piano, and the raw power of the human voice.

“Himala” is the story of Elsa, a young woman in the destitute barrio of Cupang, who starts “healing” the sick after the Virgin Mary allegedly appears to her. Fifteen years ago, Vince de Jesus and Ricky Lee adapted the celebrated Bernal film into a stage musical. The 15th-anniversary production playing until March 4 at Power MAC Center Spotlight in Circuit Makati is a collaboration between The Sandbox Collective and 9 Works Theatrical.

“Cupang” is a play on the word “coping,” Lee explained. “Elsa was an outcast. She made ‘miracles’ so that the townsfolk would accept her.”

As far as “dream roles” go, this is it for Santos, who reprises the character that Nora Aunor gave life to in the 1982 film, and that May Bayot interpreted in the 2003 Tanghalang Pilipino musical and its reruns.

Santos is the youngest to play Elsa, and she knows that the audience in this production is part-millennial.

“People think of Elsa as someone holy, but she is human,” said Santos. “She is a stubborn troublemaker who consistently gets scolded by her mother. She isn’t divine, she’s mischievous but she tries to be a good daughter.”

Does her being an adopted child factor into the ensuing mother-daughter dynamic as their lives, and the whole town, are upended by the alleged apparition? Santos thinks it may have even made Elsa’s mother more protective, fierce even.

During rehearsals, Escalante asked the director “how far” she could go as Aling Saling, since the character’s role in this musical is more significant than in the film. (Singer Dulce played Aling Saling in the TP staging.)

“Aling Saling really cares for Elsa,” Escalante explained. “She accompanies Elsa around the barrio as part of the Syete Apostoles group of disciples, and at home as her mother. She is a natural, nurturing mother. She asks Elsa what’s on her mind, and doesn’t just rely on what she sees. She is driven by her love, and will do anything to protect her daughter.”

In Act 2, as Cupang degenerates into a corrupt circus with Elsa’s popularity, Aling Saling is among the first to have a change of heart, exemplified in a gutting duet between mother and daughter that leaves one asking: Did Aling Saling really believe Elsa saw the Virgin Mary?

But “whether Aling Saling believes Elsa’s visions or not, she is always going to take Elsa’s side—because she is her daughter,” Escalante said. “She is that kind of mother.”

Motherhood is just one of the many layers of “Himala.” De Jesus enumerated other elements that factored in writing the music: “Faith, faithlessness, fanaticism, politics. It discusses how a good person, in an effort to be loved, ends up being broken.”

As instructed by the director, the actors did away with lapels and makeup, save for a slathering of coconut oil to depict the grit and dryness of the barrio air. And with less, “Himala, Isang Musikal” became more powerful.