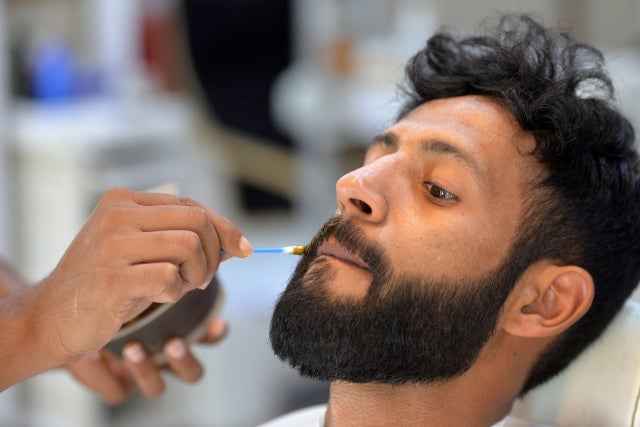 This photograph taken on October 10, 2017 shows a male hairdresser applying colour on the moustache of a customer at a men's salon in Islamabad. Nails are buffed, blackheads scrubbed and coffee sipped to the sound of clipping scissors inside the "Men's" salon in Pakistan's capital Islamabad, where a growing number of male patrons are set on revamping their style. Image: AAMIR QURESHI / AFP

Nails are buffed, blackheads scrubbed and coffee sipped to the sound of clipping scissors inside the “Men’s” salon in Pakistan’s capital Islamabad, where a growing number of male patrons are set on revamping their style.

Deeply conservative Pakistan has strict notions of masculinity where men are often expected to be austere and flamboyant styling is to be avoided.

But savvy entrepreneurs in urban centers have latched on to a new metrosexual trend: male beauty salons.

While women in urban Pakistan have long enjoyed access to the care of beauticians and stylists, expensive facials and mani-pedis for men are becoming more common as disposable incomes in the nation’s swelling middle class grow—per capita income jumped by 6.4 percent in 2017.

A vibrant social media culture has also fuelled the desire to be selfie-ready at any time, with influencers like Adnan Malik and Osman Khalid Butt attracting hundreds of thousands of followers online with their fashion-conscious posts.

At Tauseeq Haider’s “Men’s” salon, customers usually fork out a minimum of 1,400 rupees ($12.60) for a visit—a far cry from the 200 rupees spent at traditional barber shops.

“Men have equal right to be groomed and times have changed. It’s no more just getting your haircut,” says Haider.

“Senior citizens, bureaucrats, they don’t feel ashamed of saying that I need a facial, massage, my nails need to be done, please suggest what should I get,” he adds.

In rural Pakistan, men have traditionally taken their fashion tips from Islamic dictates, with the Koran specifying the length of beard and mustache along with hygiene guidelines.

And in the cities, Bollywood and Western entertainment have long driven fashion trends for conscientious groomers.

But times are changing fast in the rapidly developing South Asian nation, with social media setting and wrecking trends in urban centers at the speed of a swipe.

According to Lebanese salon owner Michael Kanaan, who has been based in Pakistan for more than a decade, rising wages and greater exposure to global culture is fanning the burgeoning demand.

“The Pakistan male is becoming more metrosexual. It is all due to the internet and the age of satellites and TVs,” says Kanaan.

Economist Minhajul Haque agrees, saying Pakistani men are also subjected to a new slew of online advertising campaigns that have reinforced the trend.

“There is this whole lot of clever marketing of male beauty products which is spurring demand,” he explains.

Humayun Khan, 49, says he is fine with spending more money to look good and his wife is supportive of the new passion.

“I… get my nails done, get my haircut, get my facial and I am done for the day and after two weeks I come again,” he says.

“If I don’t look good, my wife wouldn’t like me,” he laughs.

“Men are very conscious about their skin now… and consider it essential to get facials. Previously it was not common, but now the trend is increasing among men to get themselves groomed,” says Ghori.

But it’s not just the salons that are cashing in on Pakistani men’s blossoming cosmopolitan predilections.

Zafar Bakhtawari, chairman of the D. Watson Group, one of Pakistan’s biggest pharmacy chains, explains: “I can say there is a revolution coming up in Pakistan in the male psyche that they are becoming very much conscious about their beauty, about their face, about their hair, about their dress and it’s a great revolution.” NVG

Male grooming alert: Return of the mod style and the slick side-sweep